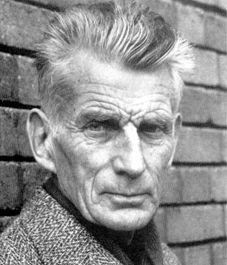 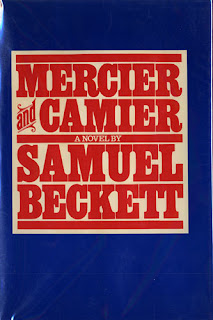 Samuel Beckett, trans. from the French by the author Mercier and Camier (New York: Grove Press, 1974)


Written originally in 1946, Beckett's first novel after World War II did not have a easy time of it getting to press. Although it was accepted by the French publisher, Bordas, in 1947, Beckett withdrew it before it was printed, insisting that, according to biographer Deirdre Bair, it was "a working draft or preliminary attempt to evolve a new technique of fiction." After years of forbidding its publication—during which various critics quoted from it and wrote about it in their studies—Beckett was finally convinced to allow its 1970 publication in French. He still resisted translating it, the English language edition not appearing until 1974.


Perhaps that delayed publication helped the work—which, had it appeared earlier, would have seemed as a very strange fiction indeed—receive its proper due. Personally, it is now one of my favorite of Beckett's works.


The two characters, whom Beckett describes elsewhere as a pseudo-couple, in many respects are early versions of Vladimir and Estragon in Waiting for Godot. Like the couple of his famous play, they are vagabonds, opposites in appearance—one, "small and fat...red face, scant hair, four chins, protruding paunch, bandy legs, beady pig eyes," according to Conaire; the other, "a big bony look with a beard, hardly able to stand, wicked expression"—who similarly come together, talk, speculate, argue, wonder, doubt, and attempt time and again to separate, only to return to one another's side. Like the famed dramatic duo, they seem to be awaiting something or, at least, seeking something they never find. Some passages, in fact, seem to be directly repeated in the later drama.


Like Vladimir and Estragon, their pairing belongs to a long tradition of inseparable comic figures dating back at least to Flaubert's Bouvard and Pécuchet and embracing 20th century figures such as Laurel and Hardy.


But these two, in other respects, are quite different from Gogo and Didi, for they do not simply remain on an empty plain with one tree in sight, but move forward and backward through a town that is similar to Dublin, venturing out and returning to rediscover their pasts and the dejecta they have shed in moving forward: a sack, a bicycle, a raincoat, an umbrella. Even more than Gogo and Didi, these two are a couple, not only through deep friendship, but sexually as well. They sleep together, side by side, hand in hand throughout the story (the dramatic couple of Godot separate each night), and, at least at one point, at Helen's place—the brothel to which they return again and again—Beckett describes their activities as such:


While this passage, and others in the fiction, seem to indicate  homosexual bonding between the two, however, we must not make too much of this, since one describes a former marriage and Mercier, momentarily left alone, is confronted early the book with two children who, upon seeing him, call him "Papa." More importantly, in many respects Mercier and Camier, despite their physical oppositions, are one: both aspects of Beckett's own persona, an inner and outer portrait of a lost being in search of some place to which he might escape.


Yet, the intensity of their relationship, the deep emotions they feel for each other—despite their attempts, at times, to escape each other's presence—is important to the work. For without each other and the kind of yin and yang they represent, the other is nothing, and when they do part near the end of the book, Beckett introduces a character from a previous fiction, Watt, to temporarily bring them back together, reintroducing them to one another all over again. Just as Beckett's tale cannot begin until the two, on slightly different time tables, have comically matched their arrivals and departures to meet up with each other, so when, the time round, they finally part—"Well, he said, I must go. Farewell, Mercier. Sleep sound, said Mercier."—does the story go dark:

Alone he watched the sky go out, dark deepen to full. He kept his
eyes on the engulfed horizon, for he knew from experience what
last throes it was capable of. And in the dark he could hear better
too, he could hear the sounds the long day had kept from him, human
murmurs for example, and the rain on the water.

In short, the fiction ends with a kind of death, not that very different, however, from the experiences of the couple throughout their "adventures."


What their so-called "adventures" consist of, obviously, make up Beckett's tragic-comic story. In one sense nothing happens except little oddities such as, early on, two dogs having intercourse in the same small archway where they wait out the rain, later the appearance of a businessman who claims they had made an appointment, and the violent intrusion and an attempt to arrest them by a busybody constable. They are not precisely elements of plot, but random events that serve as counterpoint to the two figures' questions and speculations, as interruptions to their elementary summations. Indeed, as Beckett makes clear, there is in Mercier and Camier no story to be told, a reality he brilliantly satirizes with a ridiculously abbreviated summary after every two chapters. Yet for all that, it is as if these two lived out an entire life in their few days of travel. While Beckett's later figures often hardly move, but live out the fictions they tell in their minds, these two move without getting anywhere, moving forward sometimes by standing still, yet becoming strangely exhausted by their seemingly Herculean ambulations. And by fiction's end, not only have they rid themselves of all possessions, they have drained their bodies of the desire to move forward—or even backward for that matter. Like the characters in later Beckett works, they have transformed their busy activities into abstract motions of thought. In this sense, Beckett truly does create in this marvelous work a kind of blueprint for his new fictional techniques, demonstrating just how much can happen in world in which nothing of importance seems to transpire. And in that sense, the little voyages taken by Mercier and Camier are journeys more vast than those of the rest of humankind.