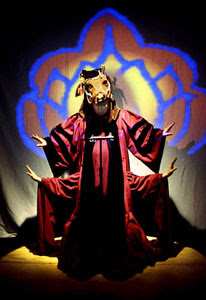 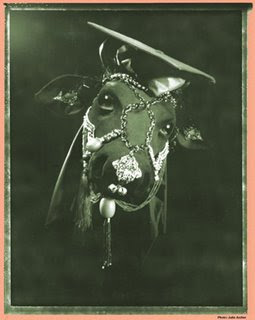 Lee Breuer (text and direction) Pataphysics Penyeach: Summa Dramatica and Porco Morto / performed as part of the Under the Radar festival, New York, Mabou Mines / the performances I saw were on a matinee on Sunday, January 18, 2009

After the weak performances I had witnessed one night earlier in a Broadway theater, I was delighted to witness actor Ruth Maleczech's marvelous performance of Sri Moo Parahamsa, the first bovine to lecture at the Gifford lectures of William James in Scotland. As if she herself had four stomachs, each with a different voice attached, Maleczech divertingly argues, in pure pataphysical nonsense, that the post-performance animal should take acting lessons, and proceeds in a heady mix of scientific jargon and an oddly logical argument based on the existence of the "triune brain," that all animals should "Know Thyself":

As an academic, a mammal, and a cow, I know I have a soul
And since I do not have a neocortex, it must not reside
therein
It's my thesis—and I'll go to the mat with a lizard on this
point—that psyche lives in the limbus
Reality is not real, it is virtual
Each mind has its game and virtualities are subject each to their own laws
The neocortex to the laws of reason, the reptilian spinal stem adheres
to chaos theory
and as for the hedonic—limbic laws are, in the vulgate vernacular, showbiz
"Know Thyself" says the Delphic oracle
Well, to "know itself" the post-performance animal should take an acting lesson

The school, of course, is her own: The Institute for the Science of the Soul, a fully accredited acting conservatory ranked in the top ten by US News and World Report!
A zany satire on various acting methods ("A Strasburg, a Meisner and an Adler may differ in approach, But Methodists generally agree that the spiritual script breaks into actions and objectives") "Summa Dramatica" ends with a recovering animation, Marge Simpson, testifying on screen to the value of Sri Moo Parahamsa's Institute, loosing an hilarious send up of phrases such as "truth is beauty." This delicious monologue (or, if we count Marge as a "true" character, we must describe it as a dialogue) ends with the new barnyard post-performance conclusion that "The Greeks have been in denial for 3,000 years / The Truth is not beautiful."

Poor Porco, the wonderful puppet of Breuer's loony imagination, has just committed suicide, and in a valedictory ode from the grave admits that he could no longer stand living, obsessed as he had become with the great Grey Lady, The New York Times. Although he attended the famed bovine-run "Institute" for a while, he left it doomed by the "Sick Fiction Syndrome," destined to end its days as a replay of a subplot to The Lion King.
Breuer's satire here at times seems so broad-reaching that it does not always hit its mark, but when Breuer's language does hit home, it takes us all aback, as we are shamed by our easy acceptance of mediocre journalism as a "true" presentation of life. Recalling his feelings upon first meeting The Grey Lady, Porco proclaims:

I am a New York Times creation, American un-emancipated
I am a tabloid's love slave.

How hilarious, accordingly, to have read a few days lady, in the Grey Lady herself, a review expressing the following:
So there's this pig, see, and he lives The New York Times. After a romantic affair with the Gray Lady, they commit suicide together with a "Diamond Sutra dagger," but not before the pig, played by a puppet, offers a few sweet nothings to a stack of newspapers.
...If you're trying to figure out what is going on here in "Porco Morto," ...you're not the only one. ...It stars animal puppets and features a lot of bad puns, pretentious jargon ("normative soulfulness"?), some jokey video and barely coherent mockery of commercialism and this news organization.

Lucky Porco's no longer around to engage in conversation with his former love. Breuer couldn't have written a sillier response. As Mac Wellman once admitted, the surreal events of his plays are generally based on news articles; "you couldn't make them up!"
I was happy to verbally admit, upon Sri Moo Parahamsa's urging: "I pledge allegiance to the hype."