Douglas Messerli | Talking to the Dead (on Toby Olson's Tampico) 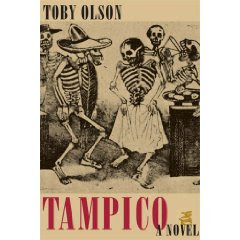 Douglas Messerli
Talking to the Dead

Toby Olson’s tenth work of fiction, Tampico, is made up of not only a series of stories about the past and death, but is told by dying men, John, Gino, Larry, and Frank, who live at “the Manor,” a decaying hospital where these former veterans have been stashed until their deaths. As the soil beneath a nearby lighthouse and the manor nurse Kelly’s home gradually crumbles and slips toward the sea, the question one might ask is whether or not these men will outlast their temporary haven or the house fall in upon their heads. Certainly there are plans afoot to close the manor down, which might leave these old and sick men with nowhere else to go.
As these figures offer up their pasts to one another, they become a closely knit community, reliving each others’ lives even as their own lives slip away.
The most romantic and dashing of their tales is the one told by John of his youth in Mexico, where, as a pilot flying supplies for an oil company in and out of Tampico, near the Gulf of Mexico, he meets the revolutionary General Corzo and his cohorts, Calaca and others, and where he falls in love with a powerful native woman, Chepa, who takes him into her isolated home as her lover. John’s tale has a near swash-buckling quality as he recounts Chepa’s dogs, died blue, yellow, and red, and various adventures, including a meeting with the General—with whom the oil company representative attempts to negotiate an important deal—interrupted by a violent storm which ends in a ship of men and women, all dressed as figures celebrating the Mexican Day of the Dead, nearly drowned as the ship flounders and begins to sink near shore.
Yet all of their stories, in one way or another, are exciting adventures involving sex, struggle, and possible death.
Frank tells the story of his mother, a God-fearing farm wife, who when her husband travels to move his farm equipment to another part of the state, has sex in the chicken coop with a young hired hand—an event which Frank, a young boy at the time, accidentally witnesses:

They were on the floor together, off in a corner on blankets, and the
the chickens were watching them. I had the door half open, and I must
have heard something, her voice possibly, or seen the chicken light at
the end of its cord where she held it, wavering. I stopped there, just inches
before the door’s squeak, and heard the muffled grind of grain under the
blanket where his heels shuffled and a tapping that was the long electrical
cord striking the floor as she bucked over him, riding him, facing me, but
not seeing me.

The event results in the mother’s hate of her son, and three days later, at the age of 34, she falls to the floor at the kitchen sink, dying of a heart attack.
Peter, younger than other men, tells his story beginning with the day he learned he was HIV positive. A heterosexual, who has evidently contracted the disease from a woman he is met, Peter has recently retired as a policeman and is beginning a new career as a detective. One of his first jobs involves a mysterious man, Gordon Strickland, who asks him to join him on a trip to bring documents to a dealer in Boston, but a second job temporarily intrudes as a young woman calls him, clandestinely meeting with him as she seeks his help to escape her violent husband and their house. The two jobs become intertwined when he meets Strickland’s assistant, Carlos, who, eventually moving in with him, helps him fend off an attack from the husband of the woman he has helped.
Larry, a gay man also dying of AIDS, tells of his work one summer on a farm in Utah, where a nun, the daughter of the farmer, also lived. One day while working, another young man, Matthew, a beautiful boy, “lean and articulate in his bony structure, smooth-chested, a mop of blond curls like a city flapper,” suddenly falls into a hole, trapped by a stump and the exposed root system. Together Larry and the nun struggle to save him, first as the nun tries to dig him free with the tractor; later, as they struggle to save him from strangulation, undressing him and rubbing him with grease to help him get free.
Gino, the oldest of the group, tells perhaps the most horrifying tale of all. Years before, at eighty-two years of age and living in an isolated farm-house, Gino is visited by his estranged daughter and two male friends, demanding money. When he refuses her, she and her friends surround the house, boarding it up from the outside and setting it on fire. Gino is saved only through his clever tactic of immersing himself in a bath filled with water as it falls from the second floor as the house begins its collapse:

I turned back then and the house was gone, no longer obscuring sight of the
rise above it, and I saw the oak tree shimmering above the ruins in the last
thin clouds of rising smoke. And before I saw down on the ground, then lay
down, I think I heard the sound of sirens in the distance, though it could have
been my own voice, searching for this place of dead ambition that has been within
me since.

In short, each of these men recounts stories and stories within stories of love and hate woven through with what we all must ultimately face, death itself.
Rather than leaving his dead men to die, however, Olson gathers these storytellers (John, Frank, Larry, and Gino) for one final exciting voyage to Tampico, where John will attempt to reclaim the house that Chepa left him decades before.
As anyone who has read a novel by Olson knows, however, there are bound to be numerous Dickensian-like coincidences and intertwined relationships before the story comes to end. And Tampico does not disappoint.
We have already discovered that the nurse, Kelly—whose sex throughout the book is never revealed—has traveled to Tampico with his/her mother years ago after the death of the father. There an aunt tells them that their father had another name as well, Calaca, whom John has described in his story as one of General Corzo’s soldiers.
Meanwhile Carlos, the man whom Peter has befriended years earlier, finds in Stickland’s secret cupboard papers which will Chepa’s Tampico house to him. Arriving in Tampico to claim his bequest, he encounters the other men—whose voices he suddenly recognizes, having heard them during their discussions at the manor as he lay in a delirium in another Manor House room. They gather, all of them, at the house, until the next morning an Indian guide, Alma, arrives, offering to take them on a final last voyage—inland over a few day’s rough terrain. When they finally reach their destination, they discover an Indian Shangri-La, a utopian world ruled by Chepa, where Carlos suddenly meets up with his father, Manuel and wife, Ramona, who, it turns out, is Gino’s daughter. Soon after, we discern that Carlos is John’s grandson!
Returning home, the men create, evidently through oil profits, their own utopian hospital, buying up the old Manor, and transforming it into well-lighted rooms, replete with canopy covered beds and warm spaces that bring the patients into easy contact. This incredible story—the only way to describe Olson’s magical tales of enormous interconnectedness—ends with a champagne celebration on the Manor’s lawn, the Indian guide Alma snapping a photograph of these living-dead men (an image Olson compares to the art of José Guadalupe Posada) embracing Chepa’s yellow Chihuahua:

They moved in their bodies for a moment, adjusting their bones under
their skins. Then they stood perfectly still in the picture that was the
picture before it was taken. …A dull thud of explosive then a brief
white light, and for a moment all their faces were illuminated skulls,
empty in dark sockets, but their teeth in those perpetual and wise grins.

The seemingly unrelated tales they have been telling have suddenly become an interwoven story of their loves and life. The past, through death, has finally been married to the present.
Reprinted from Golden Handcuffs Review No. 11 (January 2009)

Copyright ©2009 by Douglas Messerli
Posted by greenintegerblog at 9:21 AM