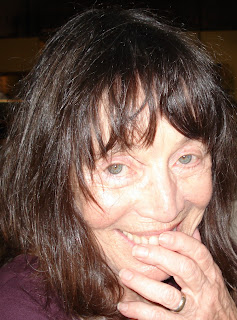 By then it was time to do my scene and I think I pulled it off pretty well but afterwards that pathetic class had the nerve to criticize me for not being real. "It wasn't honest," they complained. "We didn't believe you!" "But this is Tennessee Williams," I shouted. "He's not an honest man. He's an artist." Madame stood up, all 5 feet of her regal like a queen. "A true artist is always honest. You must be true to reality. Reality is our God, our fate, you twerp." And she glides out of the room and the class is over and I am in disgrace.

Later, comrade Stalin agrees with her. "But she's a czarist," I protest. "A spy! How can she be right?"

"Ah, little Ellie", he scolds in his gentle voice. "Even a czarist can sometimes be right for the wrong reasons. Doesn't the blood of Slavs run in her veins?"

I felt morose and he stroked my brow. "Little Ellie, don't you yet know that the artist is the servant of the proletariat? He must show them the contradictions in the world picture so they can band together and make the revolution for the future of mankind."

"And after the revolution, comrade? When there are no more contradictions? What then?"

He gave a hop and a skip and a jump for joy. "You are my beloved daughter, little Ellie. You are an intellectual, a co-ed. So I will tell you a little secret." He bent down to whisper into my ear. "Artists are parasites. They don't do an honest day's work like the farmer in the field or the worker on the assembly line." He whispered ever deeper into my ear. "You must become a scientist. There will always be a need for scientists."

"But I'm bad in math, comrade. It's my worst subject. When I take a test I write the formulas on my fingernails."

"Bah," he scoffed. "Arithmetic is for grocers. I am talking about true science, little Ellie. Experiments. Observations. Discoveries. Inventions."

We stopped at a big rock and sat down to watch Central Park unfold in the warm sun. "Tuberculosis is a terrible disease. The sick people sit on balconies and look out at the mountains. They cannot work. It's not their fault but that is no excuse. They are still a drain on the nation. Everywhere you look on that balcony, you see parasites. They have to be fed, clothed." He is indignant at such scofflaws. The wastefulness appalls him.

"But my scientists are working to get those malingerers on their feet again. They have observed that people like these share one thing in common. They breathe. So they ask what role does oxygen play in this disease?"

He smiles. His pleasure in his scientists is deep. "They are the best in the world, my scientists. They have a radical hypothesis. They experiment. They inoculate 500 white mice with the tuberculosis bacilli. They pack 250 of these mice into a sealed glass tube and pump out the oxygen so they are suffocated to death. Then they kill the other group of infected mice. They compare the lungs of each group under a microscope to see in which group tuberculosis has advanced the most. They have proved it. There can be no doubt. Cutting off oxygen prevents the spread of tuberculosis! "

He wiped away a tear with his sleeve and I gave him a kleenex. He blew his nose vigorously. I thought of the night when I was poking around in the refrigerator looking for peanut butter and a mouse staggered out into the middle of the floor. He was stiff and jerky. His tiny little feet clawed desperately at the air. I ran screaming from the room. "A mouse, a mouse"! My mother jumped up on a chair yelling at my father to do something. He just picked the little fellow up by the tail and flushed him down the toilet. I thought of those furry little white bodies squeezed together in the tube. But I'm like my mother, we aren't mice people. They give me the creeps.

He shook his head sadly. "Alas, little Ellie, my scientists will not get the Nobel prize. Their names will not be printed in the almanac. They will not be in Who's Who or the Book of Knowledge. The judges are corrupt. They are from capitalist countries. Until the revolution, it is the sad way of the world."

So I quit being an actress and enroll in a chemistry class. But soon the teacher says I'm hopeless and asks me to leave. Only I don't tell comrade Stalin. I don't want to hurt his feelings.

One night, I had a dream I tried to forget it. But I dreamed it again, more or less the same way, several nights later. So I tried another way to forget it. I wrote it down.

I go to Africa to give love and comfort to the wretched of the earth.

But on the boat over I become a pariah. The trip is rough, the boat rocks and I vomit my lunch on the deck. The other passengers roll their eyes in disgust and a sailor brings me a mop and pail but I give him a dollar to get me off the hook. He pockets my dollar and asks for 3 more. This is inflation but I count out three more. I'm curious. "Why not 4 more?" He is insulted. Am I trying to bribe him? He gives me a dirty look but cleans up my mess. Since he doesn't do a good job, the captain makes me wash the whole deck. I am afraid he will make me walk the plank if I refuse so I scrub my fingers to the bone even though it's unfair. Later I have to sit by myself in the dining room. I am disgraced. The people crowd around the remaining tables. They talk and have a good time. Sometimes they pinch each other and whisper bad things about me. This makes me sad. I review my social skills. They are excellent indeed but my fellow passengers will never know what they are missing. Until I win the Nobel Prize that is, then they'll be sorry, the creeps.

The boat lands in Tangiers and a dark nun in a torn habit comes to pick me up. She must know about me because she makes me walk behind her. "You will give the lepers a bad name," she says. She walks fast but my trunk is heavy and I can't keep up. She shouts at me to get a move on. I try to explain that my trunk is too heavy. "Why? What is in that old thing?" "My coat, my pajamas, a sweater, a change of underwear, socks. You know." She grabs the bag from me. "How stupid you are," she growls. "You are going to the land of no return. Where nobody owns anything and all men are equal." She gives my trunk to a merchant selling dead birds. They argue in an African language and he reluctantly gives her a few coins which she tucks into her pocket. That is my money for sure. When I defend myself she slaps my face and wipes her hands on her skirt. "All for one and one for all," she snaps. "Keep moving!"

It is night when we come to a rowboat on a river. She hands over the oars and I paddle across to a desolate island. Mysterious figures huddle around campfires up and down the hillsides. I approach the nearest fire. "I am a volunteer," I say. "I have come to help you." A woman with pus oozing down her face jumps up and grabs my ear. I hear a kind of cackling, I think maybe she's laughing so I try to laugh too but it comes out like "hee hee" because she's pulling my damn ear off and it hurts. She drops down with the others and they turn away without a sound but they wont let me get close to the fire and I'm very cold. I try another group but this time just in case I toss my hair over my face to hide my pale skin. "I am a volunteer." I say. "I have come to help you." "Go away," a gnarled old man without a forehead mutters. "What can you do, you twerp?" I spend the night curled up in a ball, without fire, without food. When the others fall asleep, I try to sneak up and steal a piece of bread but a nasty little brat without arms starts stomping up and down and wakes everybody up and if it weren't for the old nun they would have stomped me to death. She kicks me away and tells me to say 50 Hail Mary's, and was this the kind of volunteer they were sending now, a burglar, God help us? The world must have a hard heart indeed if this was the best it could do for its poor unfortunates. And the next morning, she makes me row back to Tangiers . The oars are very heavy. I wake up thrashing around in bed. I think I'm trying to row against the tide.

I was very disturbed by this dream, especially after the second time around. Maybe it was telling me something but I wasn't getting it. So I went to Comrade Stalin even though dreams are not exactly his thing. We sat on stone bench and I read it to him. My voice shook. I was very indignant at my treatment. But he took it in stride. Told me in no uncertain terms that my dream was smarter than me.

"Do you not see, little Elly, that individual acts of kindness mean nothing? Even those uneducated lepers knew better than you, and you a college girl, no less. All that matters is class warfare. The world cries out for the triumph of the proletariat."

"But Comrade Stalin, is nobody to help the poor lepers?"

"Ah, little Ely, you have a kind heart but lepers and cripples are special cases. Forget them. Think of the brave new world we will make". He crushes me to him in a great bear hug. Tears roll down his face. He is very moved. "Little cub," he whispers. "You will make the revolution, you are the future.

The next day I go to Aspen for a week. The snow was great.

_____
Noted visual artist Eleanor Antin creates through performance, dance, theater, photography, film and other forms. Among her many outstanding works of art are 100 Boots, consisting of 51 postcards (1971-73), Carving: A Traditional Sculpture, made up of a succession of nude photographs of her body as she lost weight, and the large color photographic series The Last Days of Pompeii (2002) and Roman Allegories (2005). Among her fictions are the series of performances of her self-created ballerina, Eleanora Antinova, Eleanora Antinova Plays (Sun & Moon Press) and The Man Without a World: A Screenplay (Green Integer).