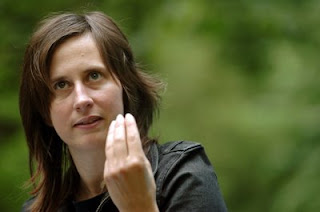 Kathrin Röggla
attic
Translated from the German by William Martin


with a hand on your heart and a hand to the sky, to lay down a sunday afternoon stroll
right through a flock of birds as if the whole time it were nothing, a gravel path
and nothing more than the gentle spray of pebbles to the right and to the left, that's not so much—

still, with a hand on your heart and a hand
to the sky, somewhere it all must have a beginning/middle/end, and a decent view as
well, for example from the top of a little derrick that one has been climbing for all these
years, and now one sits again on top looking out over the entire park landscape: how here
and there one pair after another rises then falls, how the faces rearrange themselves
before each other, and everything acts as if in reality there were no such thing as
chance—

still, with a hand on your heart and a hand
to the (sky, in pairs now), nothing further can happen, he knows, and: it's been proven,
only a basement flat or attic apartment in the light of day at last, where one sunbeam falls
onto the next then all at once get buried—
then one's eyes quickly get blindered, and there's nothing left but a flood of children to
contend with, he knows, the old guy (all nailed together) up there between the branches
of false trees, yes, soon there'll be nothing at all left alive in here, it all just gets stuck in
late morning and can't get out, he goes on, and finally all you've become is somebody
else's idiot lackey and don't exactly make an el dorado either, and the compass only
points in one direction anymore, and that's to work. then at some point you run into your
old acquaintances again and go roost like straw in the bars, no one bothers to make plans
anymore, only sometimes someone becomes a grandfather and begins to take himself
seriously.

but he didn't fall by the wayside, he knows life backwards and forwards, after all, and
learned how to deal when he had to. and so every sunday afternoon he lays down his
stroll clear through this park, along the gravel path, past the exhausted grass, past the one
or two figures carrying with them their dogs as if in bottles, pulling them out in guarded
moments to get some air, past all of this and further until he reaches the hunter's stand, as
he calls it, and climbs up. a wooden structure half-hidden between the trees, jutting up out of the park as if one might still get a good view from there. but as soon as one gets there
the view (as if through a thumbnail) sticks to moving only back and forth between a
monotone landscape of grass and sky above it, a single monstrous thread unwinding itself
each day an nothing more. but in the end there's still the people
hiding in between, and how it's caught them all again: most just lead their lives along at
arms' length beside themselves, and then they're surprised when their lives disappear
altogether. but he puts an end to that sort of thing each sunday, right from the start. and when he's gotten all the way to the top, then it's just a bit longer before he's ready to
jump—

but
with a hand on your heart and a hand to the sky, that's really too much, that's going too
far, he tells himself then, and: what is there left for him to make out of the whole story
anyway, besides, he just doesn't know what to do, with everything these days so stuck in
the middle, so stuffed as he is with air.

____
Born in 1971, Austrian poet Kathrin Röggla recently published her first book, niemand lacht rückwärts (no one laughs backwards). She won the Berlin Younger Writers Award in 1993 and in 1994 was a finalist in the Ingeborg-Bachmann-Preis competition. Over the past few years she has had numerous publications in Austrian and German magazines.

English-language translation copyright ©2009 by William Martin.
Posted by greenintegerblog at 7:16 AM