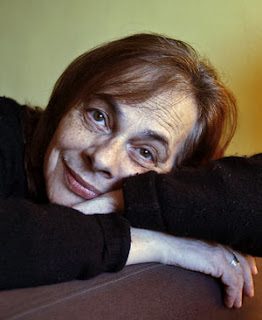 Once a week the overseers ride on their victims. It's not always the same day; if it were, the cavalcade would lose the element of surprise which constitutes one of its major attractions. Consequently, the day is chosen at random, as are the mounts.
The exercise in equitation takes place on the stairway which leads from the first level of the prison to the second, in a upsloping direction. On the appointed day, the overseers burst by surprise into the cells of the prisoners, selecting those to be stampeded and bundling them in black hoods, so that they will have no cognizance of where they are taken, or of the casualties which occur during the ordeal.
The prisoners, driven forward by the riders, are herded to the edge of the stairway, and their heads, beneath the hoods, jostle and thrash about, like those of thoroughbreds at a racetrack.
It must be acknowledge that the spot selected for the contest is more than adequate: the stairwell, of cement, is gloomy and narrow, and the stops, spaced far apart, are sufficiently dilapidated to blindly aid in promotion the spillage of gore.
The riders climb onto the shoulders of their victims and, if someone slips, he is severely castigated: maintenance of equilibrium is paramount, and the riders' boots, digging with precision into the armpits of the mounts, effectively discourage any vacillation.
In a single file, the mounts begin the ascent.
The riders provoke their victims with whips, screaming threats and vying for first place, but the obstacles are numerous and unknown, the ascent at every turn more difficult.
Many mounts stumble and fall, others dash against one another, shouts and the sounds of choking are heard; those who succeed in scaling the first steps ignore those faltering around them, the inclination of the ramp, and the disposition of the oncoming obstacles. Foul smears, blood stains, chips of broken teeth mark the struggle to challenge the stairway, but nothing is certain until the last step has been attained.
Those prisoners who have not been selected for the ordeal are obligated, nevertheless, to goad the mounts, and further incitement is offered by stern officials who preside over the exercise.
The winning rider obtains a trophy awarded by the captain, and the mount receives a lump of sugar as a prize.
______
English language translation ©2009 by Gilbert Alter-Gilbert

Born in Montevideo, Uruguay, Christina Peri Rossi is a major Latin American "boom" writer of fiction and poetry. She was forced to leave Uruguay in 1972 to escape political repression by the military government, and went to Spain, where she worked as a journalist in Barcelona. Among her many works of fiction are Descripción de un naufragio (1975, Description of a Shipwreck), La tarde del dinosaurio (1976, The Afternoon of the Dinosaur), and La nave de los locos (1984, The Ship of Fools). Her Solitario de amor of 1988, a work that explores a lesbian relationship, was a scandal at the time of its publication.
Posted by Douglas Messerli at 7:33 AM