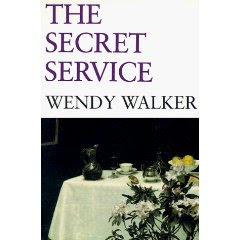 In 1982 Wendy Walker, at the suggestion of Charles Bernstein, sent me the manuscript of The Secret Service. In retracing the long history of that book, I’ve discovered that it wasn’t quite yet finished at the time; the author completed it later that year. While I quickly accepted it, given my perpetual financial difficulties and the size of the text, I was slow to publish. The following year Wendy finished a new collection of stories, The Sea-Rabbit, Or the Artist of Life, also sent to me, which I immediately recognized as a work that might be more easily assimilated by the public, arguing that it should appear first. The Sea-Rabbit was published—with some very good review attention—in 1988 (after only a three year wait!). Meanwhile, Wendy continued to revise The Secret Service, finishing her revisions in 1990. I published that book finally in 1992—ten years after its original acceptance!
In 2007, I decided to revisit or to “review” the work—in the true meaning of that word. What I discovered is what I had known all along, that the work is a true masterpiece. But I think, perhaps, it has taken me these 23 some years to truly appreciate its multiple themes and its overall significance. Certainly the critics of 1992 did not fully comprehend the fiction, and sadly, it has now long remained out of print—something I pray may soon be corrected.

The story of The Secret Service—and Walker’s works, unlike so many other books I have published, can truly be described as having plots—is a knotted tale of intrigue. Agents of the British government Secret Service have discovered, based on an anonymous message, that the King—as a result of a series of perfidious acts the author describes as “an enormous vengeance,” involving a switch of babies by the French Marchioness of Tralee—has married his own sister. Not only is the future of the royal house, accordingly, based on an incestuous relationship, but, as it becomes apparent, other French and German figures are plotting to publicly reveal this information, and so bring down the Church of England and destroy the monarchy, replacing the Queen with a French pretender.
In order to discern the machinations of that transformation and ascertain the timeframe of the plot, the Secret Service springs into action. Rutherford, his young new inductee Polly, and Rutherford’s aging mentor, the Corporal, along with a local agent, posing as a keeper of a flower shop, have perfected a system, combining various theories of the transference of time with the power of opals to produce visions, in which human beings can be changed into objects. Knowing of the three villains’ passions—Baron Schelling’s devotion to glass and porcelain, Cardinal Ammanati’s love of sculpture, and the Duc D’Elsir’s admiration of roses—they transform themselves into appropriate objects: Polly into a perfect Baccarat wine goblet, the Corporal into a bronze statue of Thisbe, and Rutherford into a salmon-blossomed Albertine rosebush—all awarded the three foreigners by their supposed friend and ally, the King of England.
Things go swimmingly along until the three, admiring each other’s treasures, accidentally break the goblet—potentially destroying Polly, who has been kept in the dark by Rutherford and the Corporal about the pernicious plots the enemies are hatching. Rutherford must seek out the broken object, revealing himself to a young woman the Baron holds in a tower. That woman, we later discover, is actually the stolen princess (believed dead, but saved, it is later revealed in a wry Dickensian-like tale, by another exchange of infants by the late-Marchioness’s nanny), and it is her young lover, Ganymede, himself a sort of changeling, who ultimately retrieves Polly/the broken goblet from the Baron’s locked chambers.
Brought back to England, Polly undergoes recuperation, recounted in the longest chapter of the fiction, Chapter Nine, as a series of adventures Polly imaginatively experiences, filled with dozens of different dream images and structures from Freud and Jung to literary fantasies suggested by writers as various as Poe, Borges, Nabokov, Barnes, Calvino and García Marquez.
Meanwhile, the plot thickens as the malefactors, now aware of the nature of their gifts, speed up their machinations. Agents foil and ultimately destroy the Duc and Cardinal, but the Baron, who has also covered his own body in a porcelain sheen (polished with the bones of infants) which protects him and proffers him eternal life, plans to embalm his young charge. She resists, offering up only one arm for experimentation, before Rutherford and his men arrive on the scene. Meanwhile, in a paranoid delusion that all objects about him may be inhabited by his enemies, and suffering from horrible side-effects from the application of his porcelain coating, the Baron goes mad, tearing up his mansion and, eventually, destroying his own body in an attempt to break through his new “skin” to the blood and bones behind it.
While Walker’s story is certainly engaging, it is her writing that utterly captivates the reader. Unlike so many works of contemporary fantasy and folktale that seem to be only half-committed to the reality of their creations—the writers appearing to have one eye on the constraints of the story and other on the enchantment they are busy weaving for the child-like reader—Walker is completely convincing; without sacrificing irony, she apparently believes in the transformative acts she is describing and is utterly committed to the adult art with which she is engaged. I can think of few other contemporary works with such authoritative stylistic flourishes as The Secret Service. A single quotation must serve as evidence in a near-encyclopedic work of astonishing writing. The following, a dreamscape of the wonderful city of thieves, is as compelling as a De Chirico landscape:

As she neared [the domed building], …[it] gave the impression of a
basilica. Its walls were sheer and high, like the walls of all the houses
in the city, and marked only by the thinnest and longest of windows,
like slots in a box prepared for the trick insertion of knives. The dome
rested on a square base, from which a varying number of apses ex-
truded, tall semicylinders on each face. All around the houses of the city
clustered up almost to touch the building, but as its main entrance lay
right in the line of the street, she had little difficulty finding her way to
the threshold.
Passing under the deep archway she entered a radiant grey half-light.
Hundreds of people were quietly milling about in the great circular space,
while the hemisphere, its circumference pierced by many windows,
floated above them. The floor was inlaid with a pattern that sprung from
the center in beams fragmented into lozenges. The crowd massed in
irregular groups on top of this pinwheel grid, punctuating it as trees do
a flat landscape. Polly stood just inside the door a few minutes, accus-
toming her eyes to the light, watching the crowd shift, and wondering
where to go. Then, as though it were the sea parting, the crowd, with
no evident purpose, moved away to either side, leaving a clear path to
the heart of the pinwheel; and there, Polly beheld three men of astonish-
ing height in long red robes, the middle one with his back turned toward
her, the other two facing away to the left and the right.

Walker’s world is a world of mystery, castles, architectural wonders, secrets, changelings, doubles, madness, terrorism, and death—in short, as she herself prefers to characterize this work, she is writing in the tradition of Gothic fiction, horrible and terrifying in its revelations. If her writing style outshines even her inventiveness of story, these two work in tandem to create themes that for some may be even more overwhelming. For Walker’s world is also one of eternal change, constant alteration where humans and landscape morph into one another and, in so doing, transform experience into a series of encounters dangerous for those who prefer tranquil stasis. Just as the characters change into goblets, roses, and sculptures, so too do her sentences arch each over the next, reforming the text as it moves forward until we can no longer recognize a single “truth,” which is, obviously, the very nature of all great art.
After her multitude of adventures, real and imagined, Polly discovers that fact once again as she attends a play in Paris, a melodrama clearly intended for popular audiences. The plot of the story and the dramatic flourishes of its actors—the drama parallels what Polly knows to be the “true” story of the imprisoned princess who has now disappeared—convince her that she is observing the princess and her lover Ganymede themselves. She rushes backstage only to discover a forty-year-old tragédienne, sponging “a grimy veil of moisture from her ripe cleavage.” Yes, we suddenly realize, art is a terrorist act!
It is fascinating to read this great text of transformation, as I did, in late 2006-early 2007, in a time when we are asked by our government to be on the lookout for possible terrorists and their activities, when a large city like Boston can come to near standstill on account of a few light boards strategically placed to advertise a television cartoon series. Walker’s 19th century British Secret Agents ultimately destroyed their enemies only to realize their enemies had themselves been deluded; neither side knew the “truth.” As The Secret Service reveals, perhaps the truth, in the minute foreignness of our memories, can only exist as a forgotten dream.