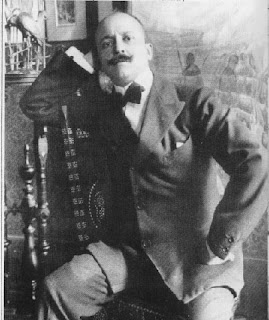 It seems appropriate to be writing on F. T. Marinetti’s fulminating fiction The Untameables on the island of Ischia, suffering today, the third day in a row, from the blistering heat of an African sirocco. For, although Ischia is normally paradise, the walk into Forio this morning left me dripping even onto these pages upon which I am writing about the criminal crew of cutthroats sentenced to the bottom of a pit on the desert island of Marinetti’s work:

Everything was clear under the merciless sunlight that would have reduced
any European cranium to madness. The gallop of the heat across the flame-
congested sky forewarned of the tropical noon. Enraged, the sun sparkled
like a sharp smooth sword held high by a celestial executioner. Below, the
terrorized isle trembled, bristling with flames like the head of a condemned
prisoner. Light. Silence. Destiny.

The author speculates an African seas setting, but suggests that his fiction more likely occurs on an island—like Ischia—“that had emerged from the lava sea within a volcano.”*


But here we must depart my beautiful—if fiercely hot—Ischia for a world where Negro soldiers with mastiff heads locked into steel muzzles keep watch over their vicious prisoners, chained together in the pit below, men whose flesh is coagulated with each other’s blood and whose bodies are covered with open sores from the incessant squabbles.


As Luigi Ballerini pointed out in the introduction to my Sun & Moon Press edition of 1994, it is not hard to imagine this horrific world as a metaphorical representation of the “stinking, blood-filled trenches” experienced by Marinetti during his service on the Austrian-Italian front in World War I. Certainly there is something far more pitiable about the “heroes” of this work, Vokur and Mazzapà—perhaps another version of the Laurel and Hardy kind of pairing that is part of a long literary tradition beginning with Flaubert’s Bouvard and Pecuchet and continuing with such figures in works by Joyce and Beckett—than the violent Nietschean warrior Mafarka of Marinetti’s earlier “African” novel Mafarka the Futurist. For neither the black guards nor the prisoner Untameables control their destinies. The mysterious rulers of this desert island are the Paper People, cone-shaped beings “surmounted by circumflex book-hats,” who hiss their instructions into the ears of the Negro guards. In short, not only is this world ruled by people of the written word—not unlike bureaucratic paper pushers—but is metaphorically ruled by the author and readers—the ultimate Paper People who push and bully their raw entrapped characters into a bizarre series of events.


Thus the fiction predictably begins as a series of stories within stories, as Mazzapà tells the tale of “The Battle of the Two Oases,” of the struggle between the Oasis of the Moon and Oasis of the Sun—a story, in short, about a battle between the feminine principle and the masculine—which anyone who knows Marinetti’s writing would have guessed, ends in the Sun’s victory, the island strewn with camel carcasses, the Oasis of the Moon having lain idly dozing to the clanking of the camels carrying skins full of blue water. Although Vokur suggests some possible escapes, Mazzapà reveals to him there is no way out.


Soon the guards receive surprising new instructions to unmuzzle themselves, unchain the Untameables and travel together to a surrealist-like oasis at the center of which is the lake of poetry and feeling.

There was nothing in that lake, nothing. But all dreams bubbled there among
velvet crystals and melodious jewels.

As the lead Untameable Mirmofim and the others arrive at the shore, eleven Paper People spring up upon the opposite shore, recommending the lake’s waters: “Drink up, bathe and create if you can, with the coolness of these waves, the high serene music of goodness.” As Vokur dives into the waters other guards follow, Mazzapà finally dragging Mirmofim and the Untameables into the water with them.


Suddenly their vicious hostilities fall away as they join one another in a new sense of camaraderie which borders on a Whitman-like homoerotic communion of men:

Mirmofim the surgeon took Curgass the priest by the hand, Curgass took
Kurotoplac the teacher by the hand, Mazzapà and Vokur joined them, and
the five of them began a ring around the rosy in the water which encircled
them at the waist.

Thereafter, they circle round one another upon the shore in a hilarious sing along that might remind one more of a Beckettian hootenanny or the zany tunes of Weinstein’s Red Eye of Love [see my essay on Weinstein in My Year 2003]—with lyrics such as “Big big / is the boat / where our friendly friends and family / are as happy as can be / when the Angelus is heard / on the sea”—than this author of explosive manifestos.

The Untameables hugged each other and were amazed that they were no longer
hurting each other because the studs of their legbands, armbands, and frontlets
bent easily in the grips of tenderness, like the tentacles of an octopus in the warm
summer sea.

This love fest continues with a frenzy of brotherly kisses until, like Ionesco’s flying personages, Vokur's and Mazzapà’s heads begin to float “up up up.” Together with the army of transformed Untameables they triumphantly enter the city of the strange luminous Paper People.


Although this is certainly a wondrous city, filled with shape-shifting buildings and phosphorescent houses akin to something one might read in a work of science fiction, there is an even more important shift in tone at this point in Marinetti’s strange fiction as the Negro guards and the Untameables transfer their newly discovered spirit of brotherly love to an empathetic outrage over the working conditions of the paper mill workers, the River People, upon whose hard labor the Paper People’s supremacy depends. The backs of these billions of “ferocious wheels” in the Paper People economy have nearly atrophied from bending over their assembly-line work.


In short, brotherly love has now metamorphosed into a social commitment that propels the Untameables into political action, which one easily perceives will inevitably wreak havoc upon the so-called “enlightened” ruling class.


And indeed it does! Forming a coalition with a few revolutionary Paper People, the Negro guards and the Untameables, led by Mirmofim, lead the River People into rebellion, determining to attack and smash open the Cardboard Dam—metaphorically, the pent-up creativity of the working class.


Mirmofim and Mazzapà climb the bars of the dam’s towering gates and hack away with axes upon the cardboard, loosing a flurry of “free words” and sounds—

—which flood the city, threatening to drown the River People, guards, and Untameables all, while the Paper People watch from their impregnable high towers.


As guards and former prisoners gradually come to after the flood, squabbles again break out, with Mirmofim throwing himself upon Mazzapà and choking him to death. Before breaking out in a howl of sorrow, Vokur calls his comrades to the rescue, who come “heartened in their bones and muscles by their reborn hate.” Mirmofim and the Untameables are returned to chains, while the Negro guards, “like obedient mastiffs,” offer their “weary spherical heads to the Paper People, who methodically and unhurriedly clamp new muzzles on them.”


The sun drenches poor Vokur as it had at the work’s beginning with “molten lead,” and he awakens crying out to his (now dead) friend. So the unending cycle of alternating love and hate comes round.


Yet Marinetti’s fiction does not, as one might presume, come to an end. “But,” begins the last chapter, titled “Art,” “the Untameables weren’t sleeping. They were boiling.” Mirmofim has a vision—an internal memory—of what has happened; his brain, he proclaims, is “opening up!” As he begins to retell the story, like Homer repeating Odysseus’ incredible adventures, Mirmofim recounts the Untameables’ voyage to the oasis and beyond. Alarmed by the sound of the storyteller’s voice, Vokur reaches for his rifle, and with his own and the dead Mazzapà’s weapons in hand, goes down into the pit to check on the ruckus. Upon hearing the quiet rhythms of Mirmofim’s tale, he crouches down in the sand, the bayonets of the two rifles crossed in his hands. Art has metamorphosed the beasts into men!

___
*Italian critic Silvio Benco describes both of these novels as African novels: “The creator of Futurism is an African. Whoever wants to forget it will be reminded by him from time to time. Born in Egypt; Sudanese nurse; a wild childhood before an education in Paris as a youth.” For Marinetti’s own description of his upbringing, see “Self-Portrait” in F. T. Marinetti, Critical Writings, ed. by Günter Berghaus (New York: Farrar, Straus and Giroux, 2006).