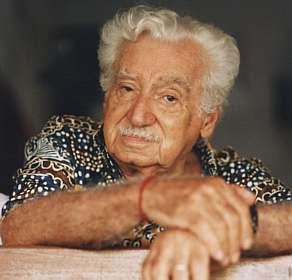 My first contact with Ilya Ehrenburg, better yet, with the literature of Ilya Ehrenburg, happened around 1932 when I read The Adventures of Julio Jurenito, in an edition by Civilização Brasileira, in those early pioneering days of translation into Portuguese of important books from abroad. The book fascinated me, owing above all to the character of the great adventurer, who is able to master a time of revolt and revolution—to go beyond the immediate circumstances and reach a broader, deeper vision of what occurred and its significance to humanity. The acidic grin of the anti-hero, imprints, in relief, the tone of truth in the resulting convulsions of World War I and the November Revolution. In this way, I became an enthusiastic read of whom, years later I would also become a friend—an intimate friend and with whom I would have daily contact. Throughout twenty years, from 1948 when we met in preparing for the reunion of the World Congress of Intellectuals for Peace in Warsaw in Poland, until his death, in 1967, together we fought ardently, having and living through many experiences. We did what we believed beautiful and just. We lived through the terrible reality of the times, through the pain, the blood, the injustice and the crimes, in search of human dawn.
“We are writers that cannot write books of memories,” I was accustomed to saying, commenting on the atrocities we were witnessing in the torturous space of the Cold War and Stalinism, when the new Inquisition (the new Inquisitions, implacable from all sides, covered with flags, even the most generous) exhibited its countenance of death. In all of this, at least there was a small breathing space, a sigh of humanism, even though limited and fleeting, of the great writer and his lucid testimony, who wrote no more than six volumes of memoirs. In them he spoke of many people and various events; he lifted the veil deforming figures and hiding evil details, but kept in his revolutionary consciousness—the truths, not the cast of opportunists the degrade socialism—others and perhaps even more terrible examples of the violence unleashed against the individual remembrances, when, being one of the “writers that can’t write memories,” decided to take the bit and remember the past, recompose it from his soviet and universal conditions.
A universal and Soviet writer, at a time when these two adjectives were not very compatible in discussing literature, because of the limitations imposed by Stalinism on its creation and its creators reduced to the miserly condition of political propaganda and of the cult to the personality, the greatness of the literature and of the art of the first years of the Revolution, not to mention the physical liquidation of great writers like Babel. Well then: Ilya Ehrenburg managed the miracle of maintaining himself a universal and Soviet writer even during the Stalinist tunnel. Be it in the novels and stories of this phase, Julio Jurenito, The Roots of Moscow, The 13 Pipes, be it in the magisterial war novel and the real alliance with the people, The Fall of Paris, of in the small and very important The Melting, the first book to announce a literary renaissance in the USSR. His Jewish blood and long stay in France, the travels around the world, kept whole the universal quality of this writer, entirely representative of the best qualities of the Soviet Literature in its national originality (or multi-national).
I could write pages and pages about Ilya Ehrenburg, his literary work, his activism in the fight for peace and against the perversions of socialism in the Soviet society; and who knows, one day I will. Not here, however, when the invitation from Enio Silveira, intellectual and unparalleled editor, at the service of the same causes of humanity to which Ehrenburg dedicated his life and his work, I come only to herald this new publication of The Adventures of Julio Jurenito. Once again Civilização Brasileira puts in the hands of the public this extraordinary book that processes one of the most important times in the history of humanity when, at the close of the First World War, the November Rev-olution marked the birth of a new era, the era of socialism. It is a book from the heroic phase, romantic and grandiose, from this first phase of Soviet Literature, creative, with sharp, critical socialist spirit. This phase was responsible for production the novels of the Don of Sholokov, Babel’s Red Calvary, Ostrowsky’s The Iron Storm, The Ruin of Fadeev, the first books of Konstantin Fedin, The Twelve Chairs and The Golden Beetle of Ilf and Petrov, the great free verse of Mayakovsky. The Adventures of Julio Jurenito give us the exact measure of force and freedom of creation existent in the USSR of that time of such generous inspiration. A book whose importance grows with the passing of time.

_____
One of the major modernist Brazilian fiction writers, Jorge Amado de Faria (1912-2001) wrote numerous books of fiction, including Dona Flor e Seus Dois Maridos (the film of which was popular internationally), and, published in English, The Violent Land, Gabriela, Clove and Cinnamon, Home Is the Sailor, Shepherds of the Night, Tent of Miracles, and Showdown.
The essay above was sent to Green Integer for publication before Amado's death in 2001.