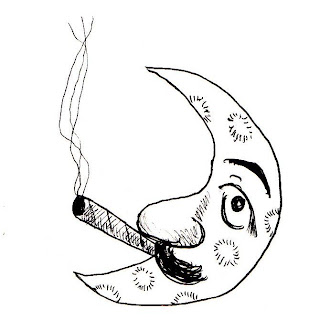 
On Eating a Star

An Incident at the Concert

The North Star Fantasy Concerto was getting underway when yellow smoke whirled up with a clap from the center of the orchestra It spread throughout the hall
At the entrance the ticket-takers panicked and opened every window in sight intent upon clearing the air When the smoke was indeed gone the orchestra as well as the audience was nowhere to be seen In the enormous hall only a radiant spray of light was pouring down
Just what happened? Since the people who'd come to the concert hall had vanished for no apparent reason this mystery was perhaps an effect at nightfall probably as a result of the sky being crammed with stardust or so went the generally accepted explanation

At an hour when the moon was rising I was walking around the perimeter of a dark cone-shaped tower when I heard a click and fell into pitch blackness or so it seemed as I entered the tower Floor and wall alike were painted with an odd geometrical pattern Right in the middle on top of a round table sat a black cat Just when I thought of touching it I heard a switch flick on and the tower began turning round and round Inch by inch it grew narrower I was tossed about in a red and yellow vortex and forced up into the apex of the cone when Pong! I was flung out In midair I did two or three somersaults and got hooked on an electric line but the wire broke and I dropped onto a passing horsecart
Unnoticed by the dozing driver I lay atop the straw in a trance that carried me over the road in the blue moonlit night transported to a distant realm

One evening while singing Rule Brittania I tossed my hat up in the air It struck a star A single star fell with a clink onto the brick pavement I picked up a white object that had fallen nearby and went over to a gaslight Just as I was examining it and wondering whether to keep it as a medallion it crackled and burst
I dashed across the street into the police booth
"You probably picked up a firecracker by mistake The real star should be over there" the policeman said as we arrived at the scene
He pulled out a flashlight Nothing was found
"It must have been a star after all" the policeman said
"A star that's some sort of firecracker?"
"Who knows...."
"It's hardly possible—" I went on to say "for a firecracker to sparkle so"
The policeman and I stood around for a full five minutes immersed in thought
"But even if it were a star...or a firecracker.... Even so...."
The policeman glanced at his wristwatch as he said "What a mysterious case!"
Whereupon the policeman and I walked off together

On Making Bread Out of Stars

Late at night above the city streets I came across the most beautiful stars Because no one was up and about I snatched three stars from the top of a wall whereupon footsteps sounded from behind When I turned round Mr. Moon was standing there
"What did you just do?" Mr. Moon exclaimed
When I tried to escape Mr. Moon grabbed my arm dragged me into a dark alleyway and beat the dickens out of me On top of all this he stung me with parting gibes I hurled a brick in their direction As it crashed on the pavement I heard a gasp Upon my return home I fumbled in my pockets The stars were smashed to smithereens Someone I'll call A. ground the dust into flour and yesterday baked three loaves of bread

A Dose of Speed

Late one evening as I was leaving a bar, the bartender said, "Have a nip of this!" and handed me a bottle wrapped in newspaper.
I swallowed a mouthful—it reeked of calcium and had no taste whatsoever. Assuming that it was a tonic for sobering up, I gulped it all down. And as I walked my steps began to accelerate. Finally it was impossible to stop. Just when it seemed that rows of gas lamps were streaking past me, I was sent crashing with tremendous force through the door of my house.
When I came to, I was sitting in a chair. The door was locked, exactly as it had been earlier that evening. Wondering why, I opened the door and went to have a look outside. At that moment I heard what sounded like the slamming of a car door and found myself back in the chair in my room. The door was locked, just as before. I took the key from my pocket and opened the door. Once again I went outside. At that moment, for the second time, I heard the slamming of the car door and was thrown back into the chair where I'd been before, I kept doggedly at it: opening the door I went out to have a look. This time there wasn't a sound. Taking deep breaths, I strolled about. Then a cop who was walking his beat came along from the opposite direction. He asked what I was up to and so I said that I was sobering up, but just then the car door slammed.
The cop and I found ourselves sitting across from each other in the locked room. One minute we exchanged glances and the next thing we knew, there was a noise inside the room and the two of us were thrown outdoors. At that moment our bodies rebounded with a bang to the room where we'd been before. There was a noise and we were thrown outside, another noise and we were thrown inside the room. The policeman and I clung to each other as we were thrown into perpetual motion. I figured the only thing we could do was wait and see what would happen at the crack of dawn.

Why Did He Become a Smoker?

"Mr. Moon's triangular" said a young man
A boy turned toward him and asked
"What do you mean by that?"
"When you look through smoke rings like this Mr. Moon is undeniably triangular" the young man thus replied and breathed in his fill of smoke from a cigarette that he held between his fingertips With a puff puff puff he blew smoke rings Just then blue moonlight streamed in Only the two of them were in the room There was no one else to disturb them And when he switched off the table lamp a great many fluffy white rings came out of the young man's mouth and disappeared as if they'd been sucked up by that radiant blue light Meanwhile the young man was looking through smoke rings at the moon He puffed out one right after another as he peered up at the moon and eventually the moon really did appear triangular What's more according to the young man's logic whether or not the moon appeared triangular was immaterial Sitting in a darkened room and blowing smoke rings toward the moonlight and the moon's being triangular were one and the same thing Did the boy believe this in theory as well as in reality? I wouldn't know a thing about it because I'm not that young man—in any case the young man kept on smoking and went through five or six cigarettes He tried to get the boy to look through the smoke rights but all came to nothing And yet from the next day forward the boy's pocket contained a paper pack The boy started going off by himself to practice blowing smoke rings And after three months filled with night after night of fine moonlight the boy had become a full-fledged smoker with silver cigarette case and all This was when the young man came to understand something and I heard it from his very own mouth To begin with there is no question that the boy was able to blow perfect smoke rings But what does that have to do with viewing the moon? Did the moon in fact appear triangular? I haven't bothered to ask I didn't need to For both that young man and myself the only real question was why the boy started smoking in the first place We were people who by our very nature were exclusively interested in things such as this

Dubbed by the Japanese as "the 21st Century's Dandy," Inagaki Taruho wrote short and incredibly concentrated stories of his favorite things: machines, airplanes, modern fairies, Saturn, falling stars, the tin moon, geometrical shapes, boys, policemen, aromatic Turkish cigarettes, black cats who turn into smoke, crashing comets, gay bars, and numerous other subjects. Writing from the 1920s to the 1970s, Inagaki is a true original, seen by many Japanese as the equal in talent to Tanizaki, Kawabata, and Mishimi, and as one of the great Japanese writers of the 20th century.
Posted by Douglas Messerli at 7:51 AM