Douglas Messerli | Seven Stories from Once and Upon: Sixty Tiny Tales 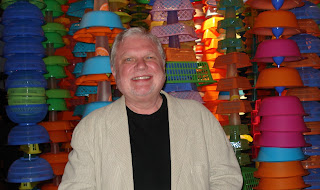 Douglas Messerli
Seven Stories from Once and Upon: Sixty Tiny Tales


Once and Upon
Once and Upon are the characters of this tale. Once is a little dreamy, abstract. He's a guy who always looks as if he was about to fly, but leaped into the sky so long ago that no one including him can remember when. For he is very very old, with a beard down to his knees. And when he sneezes he stands on tiptoes, with consistently a burp, a growl down deep in his stomach, a sniff or two, a snuffle, a whine and—excuse me please—often enough a fart. And although, so rumor has it, he was romantically inclined, today, even with Viagra, he cannot erect that past. His eyes often drip, along with his nose. His toenails need a trim.
He has been married for centuries to Upon, a clumsy slut.

Time was their only son.

City and Country
My father always used to say, "There's the city and the country," and you knew right away just what he meant. He did not mean to say there are substantial differences. Any fool knows that! He did not intend to imply that the city had a myriad of pleasures of which country folk had no knowledge or if they did had no hope of partaking of. He did not even mean that it's beautiful and quiet in the country, so still you can hear the stars in the sky.
He meant one and one is not always two, that you cannot add up people and their lives the way you do pears or apricots. Lots of people prefer the city and lots of people prefer a quieter way of life—although whenever I've been in the "country" I've encountered the incessant sound of tractor motors, the roar of threshers, shouting children, cawing crows, barking dogs, and cheeping hens. But lots of folk prefer one or the other and there's nothing else to be said.
My father was born in the country and lived in the city most of his life. I do not think he longed to return. But you could never tell.

My wife and I went to the beach where we witnessed a man lying in the sand, not as others, sprawled upon it frying in the sun, but with head and hands appearing only, he preached to us of our sins. A little crowd gathered round him, some to jeer, a few to applaud, a couple to kick sand in his face which had gotten very red in the heat and the excitement of what he said. "Come out of there!" the lifeguard called over.
"I can't," he paused in his list of our transgressions, "until everyone here has knelt in prayer."
A boy collapsed to his knees and began to beat his breast in mockery. "Gawd, forgive me!"
"He's a loony!" another man shouted, shielding his eyes from the sun to see the buried priest better.
Several in attendance walked off as if they suddenly remembered that they had come out to celebrate the day, and wandering out of reach of his message, they laid down blankets and bodies upon them. Some stayed to taunt his torsoless rantings, but becoming bored, most of these also fell away. Two boys alone stayed to keep up the banter, racing round and round the plot until one tripped his friend who pulled the first to the ground with him.
"Sit down," my wife commanded. "The lifeguard has gone to get a shovel."

Right in the middle of forgetting I forgot, remembering at last what was about to be lost. Yet it had apparently passed, since I could not now recall why I had wanted to forget or why in the midst of forgetting I could suddenly recall all. Eventually I knew I would forget, and having forgotten would attempt to recall what I had this time not. Fearing that, I attempted to memorize the past, and repeating it over and over, in retrospect, I began to realize that I had already forgotten a lot, the colors of clothes and rooms, the smells of—was it summer? the seasons, the sounds of certain voices, and the sources of the voices themselves. Now I knew everything only in outline, and the more I retraced the outline the more I comprehended how its contents had been condensed, until I saw what was within as only a spot, a dot that stood for all that it was and could then have been. Until it appeared that nothing really had occurred, although it might have if only I had drawn in a deeper breath or studied the ceiling, a dress, or listened for what must or should have been said. And so it seemed now that nothing really had been spoken—although there were certain sentences that I seemed to remember such as: Are you certain? And as certain in such a circumstance as such an uncertain person as me can be—or accomplished by my committing it to memory, or even remembered and finally forgot.

Some days, nothing goes right. I get up and it's raining. Well, okay, I'm not made of clay and I have an umbrella. But then, when I lean down to pick up the soap in the shower, I hit my head. Nothing serious, but it hurts. Is that blood? I must have cut myself shaving. It's just a little nick. Now I've lost the hot water again. If I stop to tell the landlady in the office, I'll be late for work. I'm late nonetheless. The boss had been looking for me to discuss the new account for which I haven't finished the papers. The meeting with their representative, I discover, has been changed from next week to this very afternoon. On the way to his office I twist my ankle—not enough to incapacitate, but leaving me still with a dull, stabbing ache. Is that a sore throat I feel coming on? Well, orange juice will take care of that! At the café, alas, they've just run out.
Then everything changes! Apple juice actually tastes better. The paperwork is an absolute breeze. The representative is delighted to sign on the dotted line. The largest transaction, I am told, in our company's history! I will probably get a raise. I leave the office early to discover a shining sun casting a pleasantly cool shade across the city streets. Hurrying home, I enter the living room to observe that my wife has already set the dinner table. I can tell we're having a special gourmet treat. She runs from the kitchen in anticipation. How beautiful, I gasp.
Unfortunately, I recall, I am not married. this is not my house. I have made a horrible mistake.

Pretty Is as Pretty Does

Someone had put up Christmas lights in the middle of July.
"What a shameful sight," my mother observed.
"It's pretty," I replied.
"Such lights are an expression of a very special occasion," my father's voice rose—a clear sign he was speaking only to indicate his support of my mom—"not just for any and every day of the year."
"I like them," I stubbornly held to my viewpoint.
"Christmas is a holy time," my mother insisted.
"Are the lights holy too?" I maliciously asked.
"No, they come from Pagan celebrations, to commemorate the transformation of Winter darkness to Spring light. But in our culture they represent something else," my father explained, "The birth of our savior and the light that brought into our lives."
I pretended to be stupid. "Maybe these people are Pagans too."
"They certainly seem to be," my mother responded sarcastically.
"Or Italians," my father laughed.
"Sometimes Italians use firelights just for decoration," my mother attempted to explain. "But they're usually just white."
"I like the colored ones, like these. They remind me of Easter," I added, daring to challenge their assertions.
"Well, they are pretty," my father had to admit.
"Pretty is as pretty does," warned my mother. "And a rose celebrating itself in the snow immediately withers."
She turned to the backseat where I sat, a scowl upon her face.
I didn't dare say a word after that.
But my father couldn't bare the silence we had embraced. "Look there!" he pointed his finger ahead. "The Martins have gone and painted their mailbox red."
"I think it's pretty," I quickly said.
My mother was speechless for the first time in her life.

There is always another way to tell the same story. For example, I have a friend who collects rocks. She has thousands of rocks, not only on tables, shelves, and mantels where people might normally display them, and on every window ledge, but in beds and chairs, in closets and shoes, and in the icebox. Naturally, people think this is strange and so they keep their distance. Which is really too bad, because my friend in every other way is very normal, kind, and generous to a fault. If you were sick and couldn't get to the physician's, she'd run you over in a second. She'd clean your house, if you let her. She'd bake a cake—although she'd always burn it—and take you over a hot plate.
I have another friend who collects clocks. He has them on the mantel too, and on shelves and tables and in closets and odd corners here and there. But no one seems to think there's anything unusual in that. People are always over at his place. Which is rather strange really because he isn't very nice. Right in the middle of a conversation, he'll walk out of the room and start tinkering away on one or another of his cuckoos. And even if you're absolutely parched he won't ever offer a glass of ice. And yet people come from miles around to see him and hear all those ticking clocks strike.
One day I thought about this for hours. Both are created from little pieces, bits of intricate metal in the one and in the other, sand and dust. Both tell us of time: the first by the second, the second by the age. And both will wear down it you wait long enough: the metal will fatigue and rust in the clock, wind and water will disintegrate the rock.
Despite these similarities, however, there are essential differences. The one is all noise in motion, the other suspension, silence. And while the one is all man-made, the other has nothing at all to do with us. In short, the one is naturally why the other is art.
Only then did I comprehend the intense hostility between the yard and the house.

Douglas Messerli is the author of several books of poetry, most recently, First Words and Dark, which will appear in 2009. He is also working on his annual cultural memoirs, My Year, of which the 2004, 2005, and 2006 volumes have appeared. He edits Green Integer and Exploringfictions.
Posted by greenintegerblog at 11:15 AM