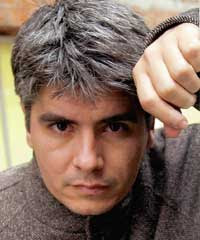 The telephone rang at three in the morning. A grave voice asked me if I were awake. “Who is it,” I asked him. This has gone on for three nights in a row, and I haven’t been able to get back to sleep afterwards. I am waiting for the telephone to ring again in the middle of the night and for some man to come on the line. He called because he couldn’t sleep, he told me. For six months he hasn’t been able to sleep. Nor does he try: sleep is not indispensable, unless it is in order not to be bored, and one ends up very bored indeed going night after night without talking to anyone. That’s what he told me. So it occurred to him to call someone and, over the course of the last few weeks, he’d been doing it, passing his nights talking with persons unknown, calling them and waking them. Many reacted badly, hanging up after insulting him. Others indulged him patiently as if listening to a late-night program on the radio. To select someone to call he opened the directory to any page and the number his finger fell upon, he marked. Later, after talking with the unknown party, he scratched out the name or, if the contactee had been amenable, let it stand, so as not to preclude the chance of hitting upon it again. At first, he had seen a doctor, in order to find out why he couldn’t sleep, until he realized that the doctor tried to change the subject and convert his treatment into psychoanalysis. The man left. He wasn’t obsessed. He had too much time on his hands, that was all. More than he could fill. He read, he listened to music, he watched television, and yet still was left with so many hours to juggle that he found it necessary to occupy them with nocturnal calls. 8 each day for 365 days per year for some 50 years of life, for example. I surmised that this was about his age. Also he related to me I don’t know what sort of idea about forming a band of insomniacs; insomniacs who would take it on themselves to keep the city constantly awake with telephone calls. “Sleep is reactionary,” he told me. The world goes on spinning and belongs to those who do not sleep. There are things which must be combated with their own weapons. The name of the band would be The Shrew-Mice. I asked him why, and he said it was because shrew-mice are the only animals that never sleep. Sleeping is not one of their capacities. Later, he replaced the word ‘capacities’ with ‘defects’. What is more, the only kind of fatigue experienced by insomniacs like himself was precisely that observable in shrew-mice: the ability to lose themselves to any awareness of the succession of events, to transpose themselves with an indeterminate point at which personal perception of time is kept annulled, at which time dies, for we recover the sense of consciousness only when it has first been suspended, then revived, and we return to being slaves of transpiration. He had become so fond of talking with anonymuncules on the telephone, that perhaps he would venture to experiment with countries in which it is nighttime when it is daytime here, because it wasn’t just a matter of yakking: it was the fact of waking someone, the longing to liberate from the chains of dream some person or person unknown. He told me that a stray motorcycle, free to cruise the city without being stopped, could wake 150,000 people. It was another of the projects planned by the band of insomniacs The Shrew-Mice. I told him it seemed a good idea to me. I don’t know how long we went on talking. In the end, I asked him not to blot out my name in the directory: wishing to concede to his foraging finger the option of being selected anew, if he had no objections. He accepted, graciously. When he hung up I couldn’t get back to sleep. I grabbed the directory, opened it at random, and dialed a number. I underlined it and gave it a ring. At first, I couldn’t shake off the idea that perhaps it was the same man who had called me, so I set down the receiver. Later, though, I repeated the exercise. This time I woke someone: a woman. I didn’t dare say anything and hung up when she insistently asked who it was. I don’t know what is happening, but I haven’t been able to sleep since then. Nor am I bothered by my inability to achieve a state of weariness. If only it weren’t for the shadow of boredom that drizzles over me. I read, I listen to music, and I watch television, but still there remain many and various hours until the sun cleanses the shadows completely from the sky. I know that at any moment the telephone will ring again, and it will be that man of whom I have spoken, and to whom I will say, “Yes, I want to form part of The Shrew-Mice.” I will begin to rouse unknown parties so as to tell them, “The world keeps on spinning. Awake! Sleep no more!”

Spanish author was born in 1966. Among his many books are Nadie conoce a nadie, Cansados de estar muertos, Yo soy, yo eres, you es, and Los príncipes nubios.
Posted by greenintegerblog at 8:14 AM