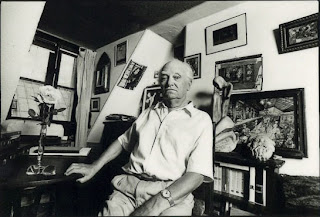 Marcel Béalu
Walls
Translated from the French by Gilbert Alter-Gilbert

The ease with which I traverse the walls readily persuaded me of their inexistence. Not least of my errors was imagining that they were simple assemblages of bricks or stones. The walls are made like plants, from living matter. Recently I found proof by accident (if this word can still make sense here.) In one of the houses where I love to glide surreptitiously, I suddenly experienced a sensation of suffocation, and a violent need for flight. The audience was too numerous for that, for me to be able to do it without passing, plainly manifest, by the door. So I went to open it and ascertained that the wall bulged from behind. They were well shut up inside there! I was startled by the general unconsciousness. To each the multitude of doors gave the illusion of being able to exit whenever one wished but no one had any desire to leave; they stayed, all ignorant of the trap but they didn’t dare say so and, owing to their cowardice, their awareness differed little from ignorance. Since that day, I no longer ask for the key to open the door but for the pickaxe to stave in the wall.