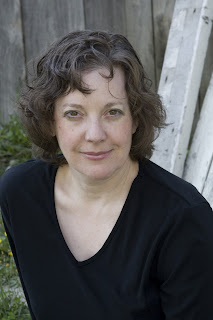 Stacey Levine
The Water (from The Girl With Brown Fur: Tales and Stories)

If it were merely water and unimportant, but it is water, all-important, more brilliant than clean.

If water could rage back at us in a future of silver clashes. But water is merely itself—its body, its delirium of cohesion, its obeisance to gravity, its life as the house of fish—so water will never blame, only the people do that: for example, Gale, who lived in Tallahassee; he owned a rural house; he hated writing his thoughts. He liked tea at nighttime with the trees hanging near the fence, when there might be a mood in the air. And smoke (all through the waxy future, we will not lose such nights). He called his wife "Mother"; he lived on a hill. Gale did not vote this time. He was not a bad man, not through all the bad years while Florida lost its lakes and he watched, while the lizards died papery in the grass. The lakes' deaths were a shame, Gale said, resting in his chair, and Mother wrote a blaming letter to a magazine. Gale liked chicken. His children would soon retire. The water will be algae-oily and never consciously suffer.

We might reach an arm toward a dark surface someday, gasping alongside the boats and birds, alongside this incomprehension of water and the way those living at the top always rule. Gale knew it. Still and all, he was glad he lived. He said to Mother, Hi, Koo-Koo. Aren't you glad you lived too?

Author of My Horse and Other Stories (Sun & Moon Press), Dra— (Sun & Moon Press), and Frances Johnson, Stacey Levine lives in Seattle. The Girl with Brown Fur: Tales and Stories will be published later this year, and Dra— will be reprinted in early 2010 by Green Integer.
Posted by Douglas Messerli at 8:14 AM