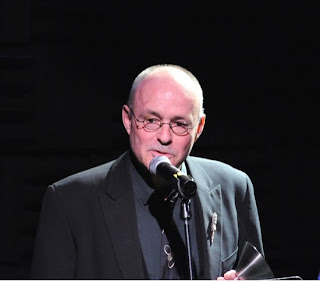 
Five.
Once past the marches of Moon Trouble, the couple glides into (and over) what is known as the Hidden Quarter of Set County, holding hands. Their eyes sparkle; they are in love. Behind them the enormous sun is a blazing, burnished medallion of tremulous metallica. All is well; the world is a happy place for those aloft in the hot air balloon of their over-wandering, far above, between cloud towers the color of the rusty and bloody red badlands of New Marrowbone. Sweetly and severally, they blacken and reblacken each others’ teeth, and ride the wind known as the North American Imp’s Breath as it wafts them, completely counter intuitively, from East to west, rising above the Shamrock Cordillera and over mist-shrouded Moth County, the place inhabited by old clothes and antique iron clothes-racks. They sing bad songs from yesteryear like “O Arabella” and Mumblety-peg” and “I Shall Cast my Shadow as Far as Your Car”. Spike’s cloven hoof of a face softens in the moist warm steam rising off Lake Lucrece near the outskirts of Cananga, the old hub of transport for the entire region; and especially the made to measure and variable focus foam rubber flywheel industry, known world wide.
Nearby heady New Dynamo’s flaming night factories churn out fantastic geysers and towers of semi-liquified scree and fiery clouds of Kanu-Kanu, slag and asphalt which when cooled is employed as a generatrix in various lively powders; in particular, Phenobotulene and Pistolplasm, substances sought in all the capitals of Europe and Asia. Set County’s photopetropharoonical pride. Next the lovers shrill with delight at the sight, veiled through flat, black planes of a northerly cloud sheet dark as deepest indigo, of the towers of the Mohonka Extension Bridge, the last and greatest work of the famed architect Flatwood Easthammer, a nephew of the great Mahoon and literary dilettante, P. J. Bojangles Crapley. The Crapleys and the Perdidos share an ancestor in the in the person of Consternation P. (For Perdido) “Buzzsaw” Nightwalker, a member of the United states Senate just before the brief and unfortunate presidency of S. S. “Steamboat” Crowe; and also an inventor of a kind of circular saw, one given to lilts and tilts and thus off the main branch of technological advance.
Sweet Linda lifts a champagne toast to her distant relation as they fly over the Nightwalker Mausoleum in nearby Minsk, adjacent Mink Muscle, near East Fossil and West Hijack, along the crumbling two-lane highway that runs into the rolling grasslands surrounding the town of P— ; P for unpronounceable, near which Narthex notices line after line of dusty, yellowish clouds. Smoke or Smaze. Smunk even, daze. Days of daze, he offers to his gal, speculatively stroking the jagged scare than runs up the North side of his face, from Adam’s apple, around the cheek bone to a thin and hollow temple. Looks to be a motorcade of heavy trucks, earth moving machinery, backhoes, graders. Wonder what they are doing in such a far and empty place as that? His wonder wanders as the balloon turns about, and teased by a new, lighter wind, tizzies on for all the world like a child’s toy exponentially removed by some fluxion of airy nothings, by moon cats and goldish crickets, out of noplace into someplace.
Linda Perdido is thinking about this glorious day of reckoning, recognition and plain old fashioned wreckage. Nothing can beat the feeling you get. Her crooked smile is so wicked you could read it, and her by implication, as an instance of innocence unalloyed. Now those years of humiliation, the teasing of her social-betters, the harsh punishment for petty theft and ladybird beetle larceny; for misdemeanors, miscreation, misdeeds and misdoods. Miscarriage in major and minor keys. That year at the Bad Girls’ School at Wemkie. Misconduct and misguidance at the Drug Rehab facility at Broom. Misery, years of it, just itching to be expressed to the full extent of the Second Digit, proudly erect, in the stony face of authority whomever and wherever he or she might dwell all over this colossal shit hole of Set County, a place more fit for the Japanese Beetle than for a person clued into her own minutely calibrated inner-life. Her cold and gem-like gaze skims lightly over the landscape, a landscape she has had to deal with from a stance of chronic powerlessness all of her twenty-five years, and finally this! This Advent, this miracle, this miracle trellis of the blackest of black blooming roses, and in the farthest reaches of her psyche: nightbright wicked blacklight the color of obsidian, the color of anthracite.
Her soul is anthracite, his is of zinc; the conversation is all crazy eights, tetchy, and often catadioptric. A whiff of cannabis reaches high flying birds– ducks, pigeons, and of course the little known Perdido Macaw, so rare and metaphysical that the creature’s namesake is, herself, unaware of this creatured fact. (Not quite the namesake as the bird was named for Honor and Hope, twin daughters of a distant relation, Carter Fenelon Perdido, a professor at the Department of Avian Studies at Glorious Morning College in Cananga; long dead but dearly remembered by his disciples at the Ganymede Foundation.

The lovers’ collective vocabulary: Forty-six words; the central object in their over-wandering of Set County and beyond: Maximumification of the state of cool; knowledge of the finer points of balloon navigation: Hazy at first, hazy at best; the state of provisioning as of this moment: Half a dozen ham and cheese sandwiches on rye toast, two Granny Smith apples, a smallish but inordinately fuzzy pink peach, a carton of slimjims, a gallon of spring water from over in Vandalia, and a case of Blitz beer in aluminum cans (with the irate black-tufted Malabar squirrel on the label; irate and like Narthex, zinc of will, gazing knowingly and hard directly into the eye of the would be imbiber; plans for the future: Vague at best, indefinite; religious sensations: Eleusinian, priapic (loosely defined), satanic; their proximate destination: Rattlesnake Mountain Lodge in the High Sierra where the two bad ones envisage another swath of desecration and demolishment at Camp Wounded Bear, a summer institute for advanced study of the Book of Mormon and the golden questions, the playing of Bugles and other Horns; (first) secondary destination: Loon Lake on Matapan Peninsula near the Velvet Sea, a place said to harbor myriad penitent and initiates– many of them old pals of Narthex from his days in the reformatory at Weasel– at the Temple of Lower Motorcycle; (second) secondary destination: Proboscis Island in Smoke Top Bay, Each Sandwich County, and in especial, the upper slopes of Old Moldy where there is to be found a certain medicinal herb, Pheronacea or Gag’s Periwinkle, said to possess spectacular powers of enhancement in the mental realms of sparkle, dazzle and total pizzaz; (third) secondary destination: The animal shelter at New Gradual, Montana, where it is hoped pet adoption might be arranged for, in order of preference: A fennec, an Osborne’s Owlet (the blood-orange variety), and, or, a Jupiter Beetle from Kalimantan said to be able to change colors, imitate rhythmically and in various radiant Coleopteran registers the Top Ten pop tunes of any given moment; tertiary destination: The holy city of Bing in Bandana County (apparently near Laos on their map, a Ziegfield Projection based on the dubious propositions of “Lateral Thinking”) where Bhang may be purchased in bulk at a reasonable cost depending on the current exchange rate of the Beng, a black-market currency unofficially official in that errant place of untamable hoydenry, maniacal hubbub, black lizards (always irresistible for our irrepressible girl); ultimate destination, barring instantiation of the higher (as opposed to the lower) Unseen– the cave known as Morocco’s Lair said to be located behind the false wall, in an unknown closet, adjoining the antique bathroom at the Inn of the Zinn of Mohocs on the occult or hidden side of the hypothetical planet(oid) Blue Streak whose maddening and rubbery orbital periodicity is such that the object never emerges from behind the moon; their purpose in regard to this last: To ascertain the truth of what is said about this feature of Blue Streak, namely Morocco’s Lair, at the Temple of Higher Motorcycle by certain of the higher priests; and what precisely is this something that is alleged to have been said? This they have forgotten, but it runs roughly like this, although scrambled and jumbled by nameless deep space juju:

; and just what is, in precise terms, their true destination to be, after all this tacking and yawing, all this waxing and waning? Vast, rumpled, slumbering Set County, skin the color of the Komodo; whose dream is the inside of a hunk of basalt (in the dream Set thinks, those who once made quite a noise now lie quiet).
Are the two criminal balloonists aware of this?
No.
Does anyone know this is the case?
No.
Does anyone know anything?
No – a trifecta of negation, like a tanager with three heads; or Cerberus (A hybrid Saluki), guardian of the bad place, the bad place called P —.
You guess.
Yes. You guessed it. Yes.
Back at the smoking ruin of the WalMart at Silo Heights, a small, wet, scorched and smoke-blackened man from the Tabernacle; small and mild and about as wise as a peach, surveys his crumpled SUV– smashed by falling debris and strangled by a seething mass of fire hoses. Crumpled and sodden, the SUV (a brand new Taboo) is filled to the top with box after box of soggy toilet paper, paper towels and napkins. Norris McCoy is his name, and he turns to one of his brethren, also of the Tabernacle, and says, I should have stayed at home, his voice breaking.

Mac Wellman's recent plays are: Bitter Pierce, Jennie Richee, Anything's Dream, and Antigone. He has published two novels with Sun & Moon Press, The Fortuneteller and Annie Salem, and one long fiction, Q's Q with Green Integer. Sun & Moon also published his book of poems, A Shelf in Sheep's Clothing; Roof Books published his poetry collection, Miniature. With Douglas Messerli, Wellman co-edited the large drama anthology, From the Other Side of the Century II. Sun & Moon also published his plays Bad Penny and The Land Beyond the Forest, and Green Integer reprinted (from Sun & Moon) his quartet of plays, Crowtet. Welllman has received numerous awards, including an NEA grant, Rockefeller, McKnight, and Guggenheim Fellowships. In 1990 he received an Obie for Best American Play (Bad Penny, Crowbar, and Terminal Hip), and in 1991 he received another Obie for Sincerity Forever. In 2003 he received an Obie for Lifetime Achievement. He is the Donald I. Fine Professor Play Writing at Brooklyn College.
Posted by Douglas Messerli at 8:13 AM