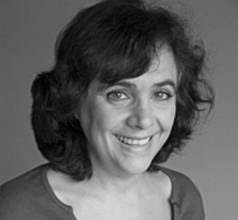 When I was an adolescent, there spread before me, like an unfolded fan, all my possibilities: I might become an airline pilot or a teacher, a housewife, a writer, a boxer, or an oil derrick. Over the course of time, with each bend in the road, the fan began to close, inclining, finally, in only one direction, to which it had narrowed until there was left to me only one possible destiny; unmistakable, unalterable, distinct, unique: to be an oil derrick, definitely.

They stole the stereo and the candelabra and the food from the refrigerator, and the crystal ashtrays and the television and even the air conditioner, and then they stole the refrigerator itself, and the television stand and the rest of the furniture and the cash stashed in the strongbox kept in the safe in the bedroom wall, and then they stole the safe and the bedroom wall as well; then they stole all the other walls and the bronze plumbing running through them, and the cement foundations underneath them, and the roof above them, and then they stole the trees and flowers from the garden and then the garden itself and the soil on which the house had been built, and they stole the granite substratum and various additional geologic layers, including one particularly extensive solid mass of pure basalt, and the pockets of water trapped inside it, and they kept on robbing and robbing until they set off an eruption of lava from a volcanic explosion which completely buried all evidence of their exploits, along with the immediate environs, the entire town, and a sizable portion of the greater metropolitan area in which they had carried out their crimes, and various sections of the adjacent geography, too, and, finally, fittingly, themselves, those bungling, impetuous and, most of all, overrated thieves.

—A fish hurt my foot.

—Did a shark bite you?

—But you said it hurt you?

—Yes. I put my foot in...water…and something tugged at me from below, quite hard…but I couldn’t see what it was…

—It tugged at your foot?

—It didn’t tug, exactly. It hurt me. It tugged, but not at my foot. It was a very rare fish.

—I couldn’t see it, but I know it was a fish. It had a peculiar name and was very rare.

—Then I found myself here. Where is this, anyway?

Born in Buenos Aries in 1951, Ana Maria Shua first published a collection of poetry at age 16, El sol y yo (1967). To date she has published five longer works of fiction, including, most recently, El peso de la tentación, and several books of shorter fiction, along with four books of what she describes as "microfictions." She has also written numerous children's books.
Posted by Douglas Messerli at 8:37 AM