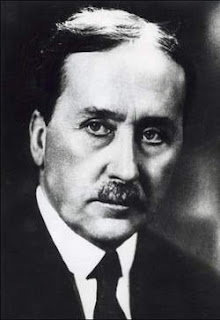 The Flemish writer Willem Elsschot’s last fiction, Het Dwaalicht (translated into English as Will-o’-the-Wisp) is perhaps his best, if shortest, work. The story is so simple that it feels a bit more like a cartoon image than a narrative “plot.” Three “blackies,” as a grocery-store owner characterizes the three major characters, suddenly appear at her door, and when the customer—Elsschot’s Chaplinesque hero, Laarmans, who appears in several of his fictions—exits the store, they approach him for help with directions, thrusting what becomes an almost sacred piece of cardboard into his hand. The card contains the name Maria Van Dam and an address, Kloosterstraat 15.
To elude further relations with the strangers, Laarmans attempts to quickly give them simple directions. But he finds it difficult in English, the only language he and the leader of the three, whom he as secretly named Ali Khan, share. Instead of going left or right, one street snakes into twists and turns, and he attempts to describe the route, accordingly, in grand gestures that only draws a crowd to the small gathering. A local tough attempts to lead them off to a local sailor’s brothel, but after Laarmans explains where the boy plans to take them, the visitors, sailors from the ship Delhi Castle, insist they want only to see Maria Van Dam, and head off vaguely along the path that Laarmans has provided.
Laarmans moves off to head home to his wife and family (we later discover that he has six children), but while waiting for his tram encounters them once again; and this time he becomes determined to help them find the right address. Thus begins a voyage as surreal and comically meaningless as any tale by Beckett.
It is apparent from the outset that they will never find the beautiful young woman who the three men met that very morning when she visited their ship to mend bags. So taken are the three by this beauty that they award her almost everything they have, a scarf, a pot of ginger, and six packs of cigarettes. She, in turn, reciprocates with her name and address scrawled on the piece of cardboard they carry. But the search, spurred on by the slightly selfish and secretly bigoted kindnesses of Elsschot’s Flemish fool, is everything, for the journey tells us much more about these four men than any possible resolution.
Despite the constant paternalism of Laarmans and his inner feelings that the "Indians" can comprehend little that his culture puts before them, it is the Flemish “leader,” if you can call him that, who is utterly confused, so desperate in his own married and bourgeois life that he imagines even this tawdry encounter between three men and one woman to be an exciting adventure. It is he, not the three “foreigners” who imagines that the young girl might be underage, fourteen or even younger. Ali and his friends are quite shocked; no, the woman they seek is in her 20s. Laarmans justifies his imaginative slip as part and parcel to his general disdain of his own country’s values and religion. He is the kind of small-minded burgher who refuses to see himself as a sexual prude. But the men who follow him are, we later discover, as moral as they can be. They, so they later tell him, are not from India, but from Afghanistan, loyal Muslims who are totally immersed in their religion and cultural values, and who later chastise Laarmans for his drinking.
Yet, their very appearance in this world of blondes leads them into danger. The first address they visit sells bird cages, empty cages that lock away not only animals, but, symbolically, the sons and daughters of the Flemish merchants. Laarmans and his Afghani charges cannot help but wonder whether the old woman at the counter and her young brute of a son are hiding Maria in a back room.
The second of their visitations leads directly to the police station, a notorious place of lock-up obviously dangerous to these strangers, aware of the racial restrictions of the culture; they will not even enter. Laarmans takes over, prying information from the fat officer at the front desk. But even though they wait outside this gigantic cage, Ali is captured and brought inside to be charged for a nonexistent crime. Without Laarmans' identification of his friend, he would surely have been incarcerated.
Their final destination is also a kind of prison warren, a dilapidated hotel used partially, it is apparent, as a brothel. Here both customers and clients are locked away in tawdry little rooms where the bartender-owner warns that some of its registered denizens have been dead for years.
Through this strange night voyage, the three Afghani men behave with the greatest of grace and honor, while the Flemish citizen, even the obsequious Laarmans, dismiss, doubt, and threaten the holy trio on their search for their own Mary. These three strangely wise men do finally find, in the wretched hotel, their mother and child, but when they attempt to award her the flowers they have purchased for Maria, she merely snarls.
As they return to their ship, the exhausted Laarmans heads home, suddenly realizing the brutal irony that the object of their search likely was, after all, to be found in the brothel where the butcher’s boy originally had intended to take them. Their dream, this likeable fool now comprehends, is far superior to the utter and endlessly boring ties that bind him. The cartoon image with which the book seem began has been mirrored back unto the society which created it.

Posted by Douglas Messerli at 8:15 AM