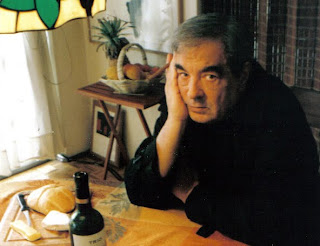 When Martin turned and began his retreat, Tom suddenly tackled him and
they both rolled down the slope of wrecked metal in the auto salvage yard.
They fought hard and senselessly and with love. How can that terrible moment
be described if neither of them lived to tell about it?

With that remarkable questioning of his own narrative techniques, Alberto retreats from his seemingly objective narration (something he does numerous times throughout the book) to question not only his authorial motives, but the meaning of it all.

Would it be better to use this page to reflect on the indecency of wars,
which do not end when the politicians sign their peace treaties but live
on in the survivors, the victims of an arduous campaign that still goes
on inside each one of them, between their guts and their hearts?
…But does that make sense? What good would it do? Tom and Martin
won’t read this book: if the document exists, this fiction about facts, it
is because they could not rely on the shield of letters, sentences, para-
graphs, parapets of words. The only way to change destiny would be to
lie, and not even a lie would save men: death, too, is a tyrant.

Alberto here defends fiction as an act of imagination rather than a telling of historical or political truth, which he recognizes would have to be a kind of lie. Life does not represent, after all, an orderly pattern of experience, but is a “totality of coincidences. And accidents” that includes everyone. It is only through the imagination, through a recreation of reality, that forgiveness and redemption can be found.
This is, at last, a novel of just such redemption. Mandy and her lover return to their relationship, with Ramos’ blessing. Agnes MacLarty, at book’s end, is pregnant with her second child. Laura, after a period of psychological recovery, is studying psychology at the University of California at Los Angeles. When one of Tom and Martin’s young friends is caught up in depression and joins a religious sect, the Children of Heaven, which brings him to the edge of suicide, Ramos, Uzcanga, officer Wellington Perales, Laura’s father, and the headmaster of the Emerson Institute secretly travel to Utah, attacking the “monastery” and rescuing the boy.
Out of these seemingly meaningless deaths grows the awareness within the community of Caracol Beach that everyone is in some way responsible and that they need to admit their failures, forgiving one another and themselves. Perhaps more than any novel since Heimito von Doderer's Everyman a Murderer, Alberto's Caracoal Beach recognizes that we are all, in small way, "responsible parties." By novel’s end, fortunately, “clemency” is finally realized—if only as crossword puzzle word—and mercy is awarded for those who have survived.