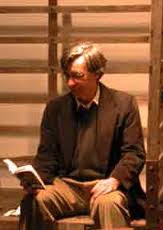 La Farge begins his third volume of “13 Writhing Machines,” the beautiful pamphlets on various oulipian and other devices to create formal constraints that liberate the writing of fiction and poetry, with the following words:

Rhyme—the echo, shadow, twin, mirror-image—fascinates me. In a world of differences, identity, or similarity pushed close to identity, seems to suggest less chaos, or a different chaos, than we’re aware of. Rhyme is used in magic. Rhyme is also a compositional constraint for writers.

La Farge, however, is not talking here, basically, of standard end rhyme, but of numerous poetic devices, games, and challenges which echo or mirror the words and ideas of creative texts. I will not speak of all of the devices La Farge suggests; I encourage everyone who’s interested in language to read the original text, but I will name a few of the author’s suggestions, while readily admitting that I am not sure that every one of them would work for me to create a interesting text.

Certainly La Farge demonstrates through several of his own examples, that he is not only a skilled fiction writer—he is the author of three works of fiction—but is also a skilled poet. For years he and his writer wife, Wendy Walker, have made the argument that excellent narrativists and fiction writers must also—or, at least, should—be skilled poets, connoisseurs of language.

La Farge begins with “Homophonism,” a process whereby an author takes a larger text, his example from the back of a cable company’s bill, and, rhyming with the same sequence of syllables, creates a new text. It is a difficult process, and La Farge points out that, in his example, liberties were taken. Here’s my example, a somewhat literal rhyming of the first thirteen lines of a longer poem, “A Lecture upon the Shadow,” by John Donne:

A Vector of the Straddle

Although there are a few variations from the original in the above (“That love hath,” for example becomes, in my version, “Fat plovers”) these are minor examples of clinamen, what La Farge defines for the reader as “a swerving,” that is essential to much oulipian writing. As the author points out, the clinamen often allows for greater aesthetic possibilities than do the “consequences of a restriction.”

La Farge’s discussion of the differences between polysyllabic rhymes (“rime riche”), often used in French but sounding clumsy and, at times, absolutely silly in English (he points to the example of the operettas of W. S. Gilbert) is elucidating. While in French the alexandrine form is still possible, in English we tend to rhyme in one or two syllables at most. But he does suggest an interesting or difficult experiment that English writers might attempt, the holorhyme, a series of identical sequences of letters that do necessarily parallel the sound. His example from Howard Bergerson is interesting:

One of the most wonderful things about La Farge’s series of “Writhing Machine” is his recountings of historical figures and texts. For any serious reader of oulipian-like writing, it is crucial to know the works of Raymond Roussel, which in eight pages of this small text La Farge describes, sharing some of the various devices and their relationships with other texts of Roussel’s novels Impressions of Africa (1910) and Locus Solus (1914). This short disquisition alone is worth the publication of volume 3, and reiterates how useful these books would be in the classroom. More and more I feel these texts should be used in every creative writing class across the country. Who better to take poets and fiction writers, young or old, through various and sundry literary forms as “the Rebus,” “Echo Poems,” “Punkwatrain,” “The Strasbourg Tramway,” “La GuaGua,” “the Brazzle,” “Pig-Language,” “Anguish Languish,” “Literary Homophonic translations,” the “Zukofskan Translation,” and even the absurd “Poems for Dogs?”

The Punkwatrain—what Robert Rapilly calls a katrainbour (a cross between a quatrain and a calembour, the French word for pun)—is a particularly fascinating form, wherein one takes a name (La Farge uses “Gowanus Canal”), which is then translated into a homophonic equivalent (La Farge’s is “Go on askin’, Al”). Then one takes the new phrase as the “moral” of a short fable or riddle in a verse quatrain which obliquely makes reference to the original phrase. The rhyme scheme and meter are left up to the poet. La Farge’s hilarious, and quite excellent, example is:

Gore takes the global view: “Go Green!”
Well, carry on, but there’s a spot
Of brown in Brooklyn Al’s not seen.
A waterway it’s not.

What fun! I can’t wait for the next volume.

A Lecture upon the Shadow

Stand still, and I will read to thee
A Lecture, love, in Loves philosophy.
These three houres that we have spent,
Walking here, Two shadowes went
Along with us, which we our selves produc’d;
But, now the Sunne is just above our head,
We doe those shadowes tread;
And to brave clearness all things are reduc’d.
So whilst our infant loves did grow,
Disguises did, and shadowes, flow,
From us, and our cares; but, now ‘tis not so.

That love hath not attain’d the high’st degree,
Which is still diligent lest others see.
Posted by Douglas Messerli at 7:48 AM