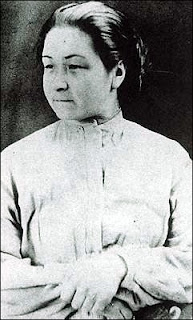 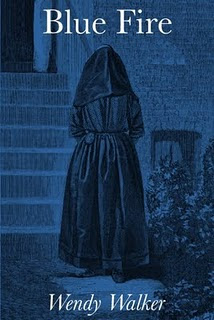 Sometimes the revenant is discovered because his grave is visible, usually by either a blue fire of blue glow.... The blue glow, in European tradition, is frequently interpreted as the soul, and it is seen as an indicator of buried treasure through much of Europe, apparently because its shows where a body is buried, and bodies were frequently buried with valuable grave goods.

Wendy Walker describes her new book, Blue Fire, as "a poetic nonfiction." This book concerns the great 19th century child murder of Savill Kent, which was thought by many at the time to have been committed by his nursemaid, Elizabeth Gough, and Savill's father, Samuel, on account of the boy's having awakened during the night and witnessed them in a sexual embrace. The Road Murder, as it was named, was one of the most sensational events in England of the late 19th century, resulting in an explosion of media coverage and inspiring at least two fictions of the day, Wilkie Collins' The Moonstone and, created out of events revealed at the inquest, Charles Dickens' The Mystery of Edwin Drood; there were also two prose recountings, John Rhode's 1928 book The Case of Constance Kent and Joseph Stapleton's 1861 book The Great Crime of 1860, the latter book attempting to remove any blame from Stapleton's friend, Samuel Kent. Indeed, Walker found the "rhetoric, marked by the easy confidence of an educated man," so repellent that she had difficulty in reading it.

The inquest, which also focused on the possible guilt of Savill's sister, Constance Kent, ended, because of lack of evidence in an investigation that was badly bungled, in the conclusion that Savill had been "murdered by persons unknown."

After the trial, Constance was sent away to France to the Convent de la Sagesse. In 1863 she returned to England to enter St. Mary's Convent in Brighton as a nurse trainee. There she met and came under the influence of Rev. Arthur D. Wagner, a member of the Oxford Movement, who wanted to return the practices of Anglicanism closer to the Roman Church, and was a particular enthusiast of confession.

What occurred between the young woman and her confessor is unknown, but two years later Constance traveled to London in his company to confess to the Road Murder. Her detailed description of how she had committed this crime was, as Walker describes it, "A tissue of fiction, contradicting forensic evidence and important testimony." Yet Constance was tried by a judge who sentenced her to death. For the next twenty years Constance Kent was remanded to penal service in five national prisons: Millbank Prison in London, Parkhurst on the Isle of Wight, Brixton, Woking, and Fulham. Her sentence of death having been commuted, in 1885 she was released, moving to Australia under the name Ruth Emilie Kay to live with her brother William. At the age of 46 Constance began nursing studies with a woman who had trained under Florence Nightingale, and over the rest of her life she served in several Hospitals, becoming matron of the Paramatta Industrial School for Girls before serving at a tuberculosis sanatorium in Mittagong and, at the age of 66, opening an old age home for nurses. Constance Kent lived to 100 years of age.

As anyone who has read the circumstances around this murder has wondered, why did Constance Kent admit to a crime—refusing to deny her testimony for the rest of her life—that she most probably did not commit? How can one come to any understanding of a figure seeking and achieving so much good after, at least her own mind, committing such an atrocious act? The child, after all, was not just smothered, but cut with a knife before its body was thrown into the privy!

The problem here, as Walker recognizes it, is how to "tell" this story without making further assumptions about the young woman's life or simply throwing a web of one's own imaginative desires across the almost obliterated truth of the circumstances.

To "trick" herself into reading the biased Stapleton book, Walker employed a method used by John Cage, the mesostic, in which she selected "one word from each line of Stapleton's book, proceeding line by line but never choosing two words that followed consecutively." This she poses as a "poetic" revelation of the now-liberated text on the left-hand side of each page, while on the right she selected extant passages from texts about the murder, including Constance's own "Sydney Document," written in response to Stapleton's book, and selections from other works in the Kent library. Walker also traveled to the houses and graveyards of the Kent family and to churches known to contain mosaic works done by Constance during her imprisonment, representing those visits with photographs.

The result is an amazing work of erudition that not only asks important questions about Constance and her family, but reveals the cultural context surrounding a young, somewhat bored and occasionally rebellious girl, haunted, perhaps, by the familial relationships between her own mother, who lived in one part of the house, and her father, who lived with the nanny, Mary Pratt (who later became the second Mrs. Kent) in the other. Constance's mother, perhaps always a frail woman—several of her children died in childbirth—was also rumored, mostly by the father, to be mentally unstable.

As Walker demonstrates, the role of a young English girl of this period was to live out life of such overwhelming sacrifice that it might lead even to invisibility. What women represented was more important than their reality: they were emblems of perfection, even saintliness.

Constance was none of these. She was an intelligent and highly curious child who was punished, time and again, for the smallest of infractions or inability to learn her school lessons by Pratt. She had seen her mother, moreover, ousted from her own life in a manner not unlike the wife of Edward Rochester in Jane Eyre. So unhappy was she that, at one point, she convinced her younger brother to escape with her to sea, with the hope of joining their elder brother, Edward, who had joined the Merchant Marines. She cut her hair, dressing as a young boy, and the two escaped to Bath where they were uncovered by a hotelier and returned to their father.

By quoting from various reports of the murder (including newspaper clippings of the time, Rhode's and Stapleton's books, and Constance's own writing) and Victorian writings as varied as Dickens, Collins, Elizabeth Gaskell, Charles Kingsley, John Ruskin, Florence Nightingale, Sir Walter Scott, Charles Darwin, and numerous others, the author recreates the tenor of the period with the reader beginning to comprehend the psychological aura of this young, rather plain-faced, slightly obstinate child. Walker does not "explain" or answer anything, but through her choices of texts conjectures, convincingly it seems to me, that if Constance did not commit the crime, she felt, in her sense of failure and out of her confused emotional responses to family life, that she was nonetheless guilty—guilty of something. Her own disposition was to give of herself, to sacrifice, and the only way she knew how to accomplish that for her own family, whether or not she realized the truth of the situation, was to take on what was perhaps her father's guilt, to become the scapegoat that might salvage the others' beings. Given her outsider role within family life, perhaps she had no other possibility.

My only quibble with Walker's work—and even that word is perhaps too strong since it is apparent that Walker is purposely bringing up these issues—is the book's subtitle. Blue Fire is indeed "poetic," but not simply because of Walker's application of the mesostic method. As Walker and I have discussed previously, all great fiction writers are also excellent poets. Walker herself has proven that in all of her fictions, and major fiction writer-poets such as Herman Melville, James Joyce, Djuna Barnes, and William Faulkner have often done their best poetry writing in their fiction rather than in their books described as poetry. Walker's word choices in the mesostic construction, lines such as "strides of blood among questions / those consequences of narrative," "insinuation of screen in truth / to conduct criticism," "any English simplicity of negligence can say / reading this after usual murder son feelings / will question truthfulness of women," (I could quote from almost any page) is more emphatically prose-oriented, in that it reveals possible "truths," rather than attending primarily to language. I am not suggesting that these passages are not poetically compelling or linguistically challenging, but positing the idea that, perhaps because of the source material, the mesostic work syntactically suggests a prose coherency.

Her "non-fiction" passages, on the other hand, although all representing material from extant works, are more fictional in their careful arrangement than some so-called novels. Prose, it seems to me, pretends, at its heart, to a sense of "truthfulness," however slippery we know it to be. Whether the prose writing be autobiographical, historical, philosophical, sociological, political, reportorial, whatever, we expect in reading it to be the truth, even though we recognize that truth in all these fields is a nearly impossible thing. That is why, when we discover a work described as prose such as James Frey's A Million Little Pieces (touted as prose by Oprah Winfrey) is actually fiction, there is a public outcry.

But that is just the problem. It is our presumption that there can be an objective reality that falsely separates prose writing from fiction, that misleads us time and again, the reason, in fact, that Walker had such difficulty reading Stapleton's prose. All prose is equally imbued with the writer's desires, imagination, miscomprehensions, and personal views, immediately transforming what is presented as "truth" into a kind of fiction. Perhaps only in a purposeful fiction can we really speak the truth.

In Blue Fire Walker is less interested in discerning any one "truth," than in questioning the multiple possibilities; and in that sense, it is not directed in the same way as "nonfiction," but represents an extremely artful construction of texts not at all unlike original fiction.

I read the book, accordingly, by using the mesostic passages as poetically-charged prose that stood alongside and against the reportage and writings of the period, the one overlaying the other ricocheting into new realities. (Indeed, I attempted to do something similar in one of my own works, Along Without, in which I used short passages of other writers' fictions to create the "story" for a film, in which the characters spoke in a highly poeticized diction.)

Blue Fire uses poetry and prose, but in a manner that is closer to fiction, I would argue, than most works describing themselves as such. For the soul beating at the heart of Walker's work, is, like blue fire, a hotter evidence of warmth and desire, a buried treasure hidden in the actions of a young girl who gave up her soul in order to enrich others' existences—a truth that was not to be comprehended in Constance's real life.