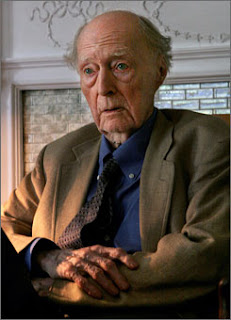 Though he has entered his fifth decade of publishing, James Purdy is not afraid to experiment or take risks. In Gertrude of Stony Island Avenue he takes more than a few: he creates a narrative voice decidedly different from that found in his other fiction, explores the relation of life to art, and manages to interweave a contemporary story with the myth of Persephone.

A fictional and sideways glance at the life of twentieth-century Illinois artist Gertrude Abercrombie, Purdy's novel is recounted by Carrie, Gertrude's mother, as she attempts to come to terms with the life of her artist/daughter, now deceased. Gertrude is an odd coming-of-age novel, about a mother's final move, late in life, from being a child to being an adult. As she makes that move, she discovers for the first time who her daughter is and thus symbolically brings her back from the dead.

The characters seem somewhat crazy, even to be living in another world—Purdy mentions, for instance, one falling back on the language of the Elizabethans as he speaks. The value of Purdy's art is not primarily mimetic: the value lies in his ability not to depict the world but to transform it and by so doing to cut through all that which obscures what it means to be human. The writing here is beautifully formal, Purdy refusing to opt for the crudities of expression. Instead of the quick fix, Purdy allows his story to build slowly, exerting slight pressures with such evenness and exactness that one is trapped before realizing it. Remarkably quiet at first, Purdy's Gertrude of Stony Island Avenue soon builds to a powerful pitch. A first-rate read, it reveals that Purdy is an artist who remains vital, impressive, and necessary. [Brian Evenson, The Review of Contemporary Fiction]

Posted by greenintegerblog at 8:54 AM