Charles B. Harris | Review of Powers' Plowing the Dark 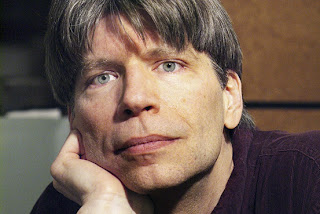 Review of Richard Powers' Plowing the Dark
by Charles B. Harris

In an early scene in Plowing the Dark, Richard Powers' seventh and most recent novel, a virtual-reality researcher at a Puget Sound digital laboratory describes the Lascaux cave paintings as the first VR. After "a million and a half years of static existence," he explains, "cave pictures [...] were the tool that enable human liftoff, the Ur-tech that planted the idea of a separate symbolic existence [....]. You see? You see? If we can make these...scratch lines come to life, then life is not just some outside thing that happens to us. It's something we come into and remake."

The theme of Powers' most ambitious work since The Gold Bug Variations (1991) is nothing less than the role human consciousness plays in creating reality and the ethical responsibilities that role implies. As symbol-makers, we alone among the life forms invent out environment. "Buildings," muses Adie Klarpol, protagonist of one of the novel's braided narrative strands, "were art's skins, the pictures we lived in." So, too, Powers' complex fiction implies, are the cities in which those buildings stand, the states and nations containing those cities, and the worldviews—cave pictures expanded to a global scale—over which nations do battle ("the basic process of modern times," Heidegger once observed, "is the conquest of the world as picture"). In the most literal sense, human reality is our hypostat.

Adie is one of eleven researchers recruited by TeraSys, a Seattle computer firm, to construct the Cavern, an empty white room that, through the magic of technology, can morph into a Rousseauistic jungle, von Gogh's bedroom at Arles, or the Hagia Sophia. A mélange of nationalities, religious backgrounds, and academic specialties, the team comprises a microcosm of late-twentieth-century America. For some, the Cavern represents "humanity's final victory over the tyranny of matter," a redefinition of what it means to be human. For Adie, who had abandoned a promising career as a painter to escape the commercialization of art, the Cavern provides an opportunity to make something beautiful. Like the high modernists whose post-Kantian view of aesthetics is encapsulated in Auden's famous line, "poetry makes nothing happen," which Powers selects as one of his novel's epigraphs, Adie equates art with detached inutility.

While Powers ultimately rejects this view, he gives it its due and is not immune to its appeal. "Sailing to Byzantium" is an important intertext in the novel; indeed, it is Yeats' paean to intellectual art that inspires Adie to construct a life-size model of St. Sophia, the Byzantine temple in Istanbul she associates with Yeats' "artifice of eternity." But if the Hagia Sophia is a temple of icons, it is also the site of ferocious iconoclasm, having been damaged and on at least two occasions destroyed by various mobs and armies during its 2,000-year history, each time being rebuilt in the image of whatever religious view its respective captors advocated. Adie and Auden may dream of an art for art's sake, but other forces, what Powers calls the "world machine," stand ready to appropriate the aesthetic for utilitarian and ideological ends.

The novel's second epigraph, drawn from Stein's Autobiography of Alice B. Toklas, describes Picasso's realization, upon seeing a camouflaged cannon trundle through a Paris street, that modernist experiments with color and light had made military camouflage possible. Near the novel's end, Adie suffers a similar epiphany. Watching Desert Storm, our latest televised war, she realizes that the electronics propelling the devastatingly accurate smart bombs derive from her team's research. The air force had taken "all her pretty pictures and put them to use." Powers'spoint seems clear. Because the mind, as one of the novel's characters observes, "gets to say what the world isn't yet," imagination carries an awesome responsibility: "A person should never represent anything that they aren't willing to have come true." Life, that which we enter and remake, depends upon poetry, which, willy-nilly, makes everything happen.

As Adie and her team of researchers increasingly elide the boundary between thought and things, Taimur Martin, protagonist of the novel's second narrative strand, occupies another empty room in another country. An American of Lebanese descent, Taimur has fled a failed love affair to teach ESL in Beirut, where he's captured by Islamic fundamentalists and held hostage for five years in a tiny cell. Because of the Moslem prohibition against figural representations, Taimur's life becomes as unmediated as Adie's is becoming virtual (for the bulk of his imprisonment, he's allowed only one book, the holy Qur'an). As Adie's group projects their imaginations outwardly, displacing the material world with embodied simulations, Taimur progressively retreats from his physical deprivations into disembodied mental space, imagining a world elsewhere, one removed from "all militias, ...power, factions, and revenge." Despite their radically different circumstances, and although a continent separates them, Adie and Taimur advance toward an eventual meeting as unlikely as it is inevitable. Book review conventions prevent me from revealing the details of this surprising and literally magical meeting. Suffice it to say that they mystical encounter enables Adie and Taimur to reinvent their lives, and that the novel's singular ending will entic many readers to turn the book over and start reading it again.

A profound meditation on the uses and abuses of the creative imagination, Plowing the Dark is a novel of ideas whose layered complexities will keep literary exegetes busy for years. Because these ideas are anchored in human actions and human emotions (like many of Powers' novels, this is also a love story), critics and general readers alike will be drawn to the book's visceral power. As important as it is riveting, Plowing the Dark confirms Powers' place as one of our few indispensable literary talents. [Charles B. Harris, The Review of Contemporary Fiction]

Copyright ©200 by Charles B. Harris

Posted by Douglas Messerli at 8:31 AM