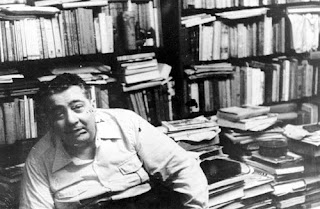 Paradiso comes with a strong pedigree; though long out of print, it is considered by luminaries such as Harold Bloom and William Gass to be one of the great contributions to Latin American literature. But even among such bizarrre company as Julio Cortázar's Hopscoth and José Donoso's The Obscene Bird of Night, Lima's novel is atypical. Those novels challenged readers with intellectualized grotesques; they made their break with the old continent through sheer force of imagination. Lezama Lima's imagination isn't so rampant; rather, he challenges his reader to trace the development of his novel's own cultural identity. Of all the Latin American masters, Lezama Lima, who was first a poet, is the most backwards-looking, as well as the most ingenuous. Paradiso is thus in many ways an off-putting book, more impressive than enjoyable, but the expanses of Lezama Lima's vision tower over many smaller masterpieces.

The novel traces two generations of cultural and philosophical development through José Eugenio Cemi and his son José Cemi. The father's life dominates the first third of the book, as he grows from a reticent student into "the Colonel," the grand patriarch of a Cuban family. In contrast to the ecstatic chaos of Gabriel Cabrera Infante's Three Trapped Tigers—another great Cuban novel that purports to encapsulate the country in its pages—Paradiso seeks intimacy in comparatively few characters. Infante sought a panoramic, egalitarian portrait of Cuba; Lezama Lima is unabashedly bourgeois and old-fashioned. The portrait he paints of Cuba is without violence or discord, a personal reminiscence turned into objective reality. Cuba is a dazzling entity unto itself: a house that "had all its rooms dripping with light. It was deliquescing in the excess of light, imparting to its surroundings the surprise of marine currents. Inside...the unrecognizable Isolde began to raise her voice to the animistic possibilities of song." Through the Colonel's experiences, Lezama Lima does for Cuba what Nabokov did for Russia in novels like The Gift, expressing nostalgia for a pure sensory wonder that has been irreparably removed. The grotesque matters little to Lezama Lima; he prefers to invoke the sublime.

With the sudden death of the Colonel, however, the book abruptly shifts. Having recovered from a near-fatal attack of asthma, José matures into an entirely different sort of man from his father. The Colonel's wife says that her husband's death "left me with a dream that one of us would be a witness to our transfiguration in order to fill that absence." Lezama Lima means for José to enact that transfiguration, yet the methods he uses are arcane in every sense of the term. With José's indoctrination into academia, plot is forsaken for theology; from an earthly paradise, the novel attempts to move to a philosophical one.

Two hundred pages of Rousseau-esque discourse follow, with only the barest outline of plot and character supporting the philosophical edifice. The long, convoluted conversations that Cemi has with his friends and antagonists Focion and Fronesis are reminiscent of Thomas Mann, but they are rooted in aesthetics rather than politics, and thus much more abstract and difficult to grasp. Further, Gregory Rabassa's capable translation sacrifices lyricism for what feels like literalness, making the whole enterprise seem more stilted than it should be. Still, Lezama Lima's erudition is apparent as he traces the development of eroticism and sensuality alongside cultural history. Fronesis paints homosexuality as a cultural development on the order of the Enlightenment, but one completely á rebours. Lezama Lima does not deign to explore the implications of such intriguing ideas; he plows ahead, leaving fully-formed but half-explained ideas in his wake.

Yet through such difficult and open-ended prose something genuinely tangible and profound emerges. It becomes clear that the Colonel's life was Cuba's cultural evolution writ on a personal scale, and that José's transfiguration is to see in an instant the entire history of mankind laid out as a path to the infinite. The theological and philosophical abstractions, however opaque, are ultimately stepping stones to a human end. Character and event get sacrificed to spiritual ideas along the way, and Paradiso functions as an analogy for that process, much as Dante's Paradiso made its way upward.

This is a very weighty theme, and Lezama Lima communicates his ambition more effectively than he enacts it. At 450 pages, the novel is thick first with images and then philosophy, sometimes to the point of incoherence. The characters have to struggle to keep up with the burden of ambition that has been placed on them, as does the reader. Lezama Lima's vision is so intensely personal and individualistic that Paradiso will leave cold many who do not share the author's lofty, cloistered concerns. But the scope of mind which Lezama Lima evokes two entire worlds, one conjured from philosophy and one restored from memory—and then joins them—has rarely been matched. [David Auerbach, Rain Taxi]

Posted by greenintegerblog at 10:01 AM