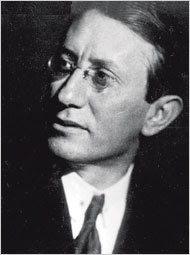 FORGETTING TO NOTICE
by Douglas Messerli

The Russian author Sigizmund Krhizhanovsky, so we are told in Joanne Turnbull's Introduction to Memories of the Future, was born in Kiev, graduating from Kiev University in law. After a short stint in the Red Army, "he lectured intensively in Kiev on the theater and music." Abandoning poetry, he took up writing stories, ultimately moving to Moscow, where his tales became more philosophical in nature.

Finding a room on the old Arbat, Krzhizhanovsky joined the thousands of other Russians in a cramped, communal life, filled with sounds and smells of crowded human bodies. In 1924 he was teaching drama theory in the experimental studios of the Kamerny Theater, and the following year one of his tales was published in the literary journal Rossiya. From 1925 to 1930 the young author found work as an editor for the Great Soviet Encyclopedia, writing further stories through these years. When his work on the Encyclopedia came to an end in 1931, a friend of Krzhizhanovsky's published a small monograph titled Poetika zaglavii (A Poetics of Titles), which ultimately allowed him acceptance into the Soviet Writers Union, and allowed his wife to enter his works into the formal State Archive of Literature and Arts upon his death in 1950.

In short, Krhizhanovsky's life at first seems to parallel many minor Soviet authors of Stalin's regime. Yet this author and his writings, radically satirical outcries against the Soviet system, survived precisely because almost none of his work was published during his life. The few stories he did submit were determined to be "untimely," and several of his tales, such as "Red Snow" might have resulted in imprisonment or even death. It was only a quarter of a century later that critics discovered his Kafka-like creations, works that created worlds unlike any others. As late as 2001-2010 Krhizhanovsky's complete writings were finally published. In short, this author wrote in almost utter silence, self-censoring his own output in order to survive.

The nightmarish satires that make up seven tales of this volume are all worth reading again and again. "Quadraturin" is a Gogol-like parable, where Sutulin, a prisoner of the cramped communal quarters—a room so small that he can open the door with his toe while lying upon his bed—is visited by a stranger who offers him a magic essence, a "proliferspansion" ointment, for free, if only he will sign a testimonial. Sutulin somewhat reluctantly agrees, and when the visitor leaves applies the substance with water to the walls and floors of his warren. He runs out of the essence, however, before being able to apply to the ceiling. In a short while the room does indeed begin to expand, but the walls and floor do not move equidistantly, but create strange, "monstrously misshapen" forms which transform his comfy coffin into a terrifying labyrinth of space. From the bed, he cannot even find the light.

Before long, the match-box room has squared itself again and again to establish itself as a huge narrow barrack-shaped space that continues to grow minute by minute so that, finally, Sutulin cannot even find his way to the door.. A desperate cry of terror for not being able to find his way out brings the apartment house-dwellers to his little cell wherein he now is totally lost in space.

"The Bookmark" begins with a man rediscovering in the confines of a book a bookmark that he once used and loved. Intending to rejoin his bookmark friend once more on a journey through a text, he seeks for a title, but unable to find an appropriate book, goes for a walk. On the street he encounters a slightly garrulous writer telling amazing stories to a friend; soon after, he himself joins the writer and, metaphorically becomes the bookmark himself, as he points to possible stories, plots, imaginary events. In one of the writer's stories the Eiffel Tower goes mad, and attempts to walk away from the City of Light; in another a cat trapped outside an office window on a sill for days, encountering storms and starvation, jumps to its death; in still another a corpse misses its own funeral and haunts a nearby grave digger who tries to find a way to dispose of the body. Each tale is more fantastic than the others, all are remarkably imaginative, but one after the other they are rejected—just as Krhizhanovsky's own works—by editors for being inappropriate. The author describes his own condition in another series of stories: Stories for the Crossed-Out.

In "Someone Else's Theme," the narrator encounters a man, Saul Straight, who sells philosophical systems for the price of a bowl of soup. In "The Branch Line" an exhausted train rider falls asleep as the conductor calls for "All dreams, please." The nightmarish journey this rider takes, where various forms and types of dream imagery push him forward, backwards, and sometimes block his path, are as outlandish as those of Borges or even Kafka's labyrinths.

The best story in this fascinating collection is the novella "Memories of the Future," a tale of an obsessed genius Shterer, who, almost from birth, is fascinated with time and tinkers throughout his life on a H. G. Wells-like time machine that will hopefully take him into the future.

So obsessed with his invention, Shterer barely notices the rest of the world, focusing on attempts, despite poverty, to create his machine; but almost the moment he finishes he is called up into the army, where, soon after, he is arrested and imprisoned in a concentration camp. There he receives word that his father has died, leaving him his fortune, if only he can return to Russia. After much pleading and maneuvering (Shterer has loaned his genius for creating mechanical devices to the Germans, improving their gates), the man is freed, but the Revolution has dispensed with the money and the bank.

Finally, the determined Shterer finds a group of individuals who will support his venture in turn for rides into the future in order to escape the Soviet system. Shterer eventually achieves his goal, but before he can share it with the others, he is blasted off alone, returning years later, an exhausted and changed man. A journalist befriends him, and others told what he has experienced demand that he share what he has witnessed there, in that unknowable world. But the man who has paid such little attention all his life to things around him is vague about what he has done and seen, and the little he remembers is obviously terrifying to those in power, as is made evident by a secret visit to Shterer from Stalin, who leaves Shterer's under-the-staircase quarters, in a rage.

What Shterer has not comprehended, Krhizhanovsky brilliantly demonstrates through his own life and writings: in order to have a future you must have a past, even if that life is lived in the shadows.