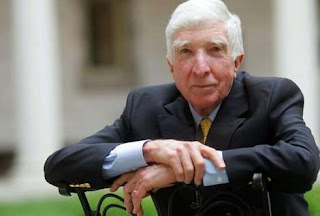 BEFORE THE CURTAIN RISES
by Douglas Messerli

Why American critics and prize-givers have been so enthusiastic about John Updike's work (he has won the Pulitzer Prize, the National Book Award, the American Book Award, the National Book Critics Circle Award, and the Howells Medal) and readers so faithful (this is his 18th novel) has always been a mystery to me. I have my theories, but they shall have to wait for another occasion. Regarding his most recent novel Gertrude and Claudius, however, I can only assert—in contrast to the several appreciative reviews that have proceeded this one—that it is little more than a work of restrained mediocrity.

The problems are many, not the least of which is the fact that Updike has chosen to write in the shadow of a great work of art that we all know and love, only to leave off at precisely the moment the other begins. That is, he has chosen to narrate the events of Shakespeare's play up until the very moment Hamlet gets underway. Certainly, the story of Gerutha (later Geruthe and finally Gertrude) and Feng's (later Fegon and ultimately Claudius) adulterous relationship fits nicely into an oeuvre obsessed with adultery. And in the hands of a greater artist—Tom Stoppard has shown us in Rosencrantz and Gildenstern what can be done with Shakespeare and his sources—this might have been an entertaining fiction. But in Updike's hands there is no sustaining story. Gerutha is forced by her father Rorik to marry Horwendil (King Hamlet); she finds him unsubtle and lacking in the finer sensibilities of bedroom behavior, and from childhood has been attracted to his brother, Feng. When Feng returns from his multifarious travels (undertaken primarily to remain away from his brother and Gerutha, to whom he too has been highly attracted), they gradually develop a relationship that quickly shifts from a play of wits to a drama of secretive and romantic love. When the King discovers their treachery, Feng (with the help of the Lord Chamberlin, Corambus [spelled throughout the novel also as Corambis, later Polonius]) poisons the King and takes over the throne, marrying his lover. Enter Hamlet.

Of course, great works of art have been written with much less of a story to go on. But Updike's work—at least in this novel—is highly dependent upon plot, and with so little to work with he fills the book with what I am sure he believes are deep insights into his characters: Gertrude is an independent woman who has no other choice in her society but to be pliant and supple; King Hamlet is a man of good deeds, a good King, a good Husband, but has no sensitivity whatsoever, and hence, is referred to by Gertrude and Claudius as "The Hammer"; Claudius is a true romantic and is capable of great subtlety in love, but also is deceitful and capable of murder. In repeating these qualities again and again throughout this short work, however, Updike becomes less than subtle himself and hammers his characters' qualities into the poor reader's perceivèd thick head. Gertrude is described over and over as "surrendering" (even as late as page 200 in the 210 page work); King Hamlet is The Hammer throughout, Claudius a clever but too subtle man. One might overlook some of these simplistic characterizations had Updike filled his yarn with some true adventure, but it is almost as if the author could not decide what to fill it with. Time and again in the book, he devotes paragraphs and entire passages to various arcane subjects: a short treatise on falconry, a description of the various toiletries available to a Scandinavian queen of the day, a list of the foods they eat, a short historical compendium of the Byzanthine empire, a brief explanation of the Nordic råd and thing. Many readers enjoy historical fictions precisely because of what they can glean from such information. In the hands of a Lagerlöf, of an Undset or a Yourcenar these kinds of facts are thoroughly embedded in the stories themselves; here Updike features it as if proving to the reader that he has done his research or used his imagination; or perhaps again he feels that few readers could possibly have knowledge of such things. One can almost see the scraps of loose jottings spread across his writing desk as he determined what to include and what not.

That said, there are a few delightful moments in the plot, as when Gertrude (having obtained from Poloinus the use of his castle for her rendezvous) requires the middle-aged Claudius to climb through the tower window, which she must help to pull him through. The couple later have a hot groping session—with their heavy clothes on. Yet, Updike doubting, so it appears, that the reader may not recall the event, repeats it later, as Claudius—fresh from emptying his vial of poison into the ear of the King—climbs for his escape, through a window (reminding him of the earlier one) into the castle latrine. Get it?

The paucity of plot might be less an issue if Updike's style—that for which is is most often touted—were not so embarrassing. He begins the novel in a kind of fake Shakespearean language "bespoken" with "bewitchments, be-botherments, and bewildernesses" and some inverted syntax that, fortunately, he quickly drops. But what replaces it is, at times, even more embarrassing. After a discussion between Gertrude and Polonius, the author waxes poetic:

O the days, the days in their all but unnoticed beauty and variety—
days of hurtling sun and shade like the dapples of an exhilarated beast,
days of steady strong cold and a blood-red dusk, tawny autumn days smelling of
of hay and grapes, spring days tasting of salty wave-froth and of hearth-smoke
blown down from the chimney pots, misty days...days of luxurious tall clouds...
days when the shoreline of Skåne lay vivid as a purple hem upon the Sund's
rippling breadth...[this continues for another page]

One can almost see, as in a grade B film of 1940s, a montage of calendar pages being ripped away one by one. How one longs for a simple, elegant, "Time passes."

Indeed, there is a kind of hack cinematic quality in many of Updike's images and words throughout the book. Each character is described at some point as if the camera were embracing their faces in a closeup, perspiration forming on their upper lips ("A ridge of dew appeared on Geruthe's upper lip, which bore transparent down he had never noticed before.") But the language of much of Updike's work is that of the soft porno novel. Penis's are referred to as "horns," "members" or—when the action gets truly racy—"spouting cocks" ("I should beat you. I should pound the pale slime of that spouting cock from your gut.") Just before this ridiculous statement Updike devotes a whole page, again emphasizing Gertrude's oft cited submission to men, to a description that summarizes the quality of much of the book:

Whereas Fengon was content to loiter in a twinned concupiscence, telling Geruthe
over and over, with his tongue and eyes and rethickened horn, all the truth
about herself that she could hold. He uncovered in her not just the warrior but
the slave. Had he bid her lie down in pigshit she would have squeezed her
buttocks together in the clench and rejoiced to be thus befouled. At night, reliving
the afternoon's embraces, she would lick her pillow in hunger to be with her
lover again—her redeemer from lawful life's deadening emptiness, her own self
turned inside out and given a man's bearish, boyish form. Her father's court
held no more eager slut than she.

Had Hamlet read this version of his mother's secret life, instead of returning to Elsinore, he might have stayed in Germany.

Posted by Douglas Messerli at 8:34 AM