Douglas Messerli | Being Alone (on Gerbrand Bakker's The Twin) 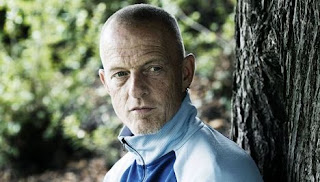 BEING ALONE
by Douglas Messerli

In Dutch novelist's Gerbrand Bakker's The Twin, a farmer, Helmer van Wonderen undergoes what one might describe as a kind of mid-life crisis. One day in what apparently is 2005 (he was 18 in his first year of college in 1967, and we are told he is 57 during the events of this work), Helmer wakes up and moves his elderly father—who can no longer walk—from the downstairs bedroom to the upstairs room where Helmer has slept most of his life.

At the same time he throws out a number of pieces of furniture and a rug, and reorganizes the downstairs. It is, as if, suddenly at the age of 57, Helmer—who at the time of his identical twin brother Henk's death in 1967, has been forced to leave the university and take his brother's place on their farm—has recognized that this is now his farm, and that he has earned the right to make decisions about his life.

Henk, although a few minutes younger than Helmer, had always taken the lead in acting and was clearly their father's favorite, a son who looked forward to continuing in father's footsteps. Helmer, more introverted and intellectual, was determined to attend the university, and had recently begun courses there. Now, years later, his bitterness toward his father is apparent, and his treatment of the old man might, at times, appear almost to fall in the category of elder abuse. But as this slow-moving, simply expressed fiction develops, we slowly begin to understand the farmer's anger and frustration with his empty life.

Bit by bit, we discern what Helmer himself seems never to be able to comprehend, that the relationship with his brother was more than sibling love, and that his inability since the fatal day of his brother's death to find anyone to care for has not only to do with his isolation in terms of both his temperament and the place, near Monnickendam in Northern Netherlands, where he lives, but is intertwined with his attitudes toward sex.

Before his death, Henk had determined to marry Riet, a young blonde woman who has come to live with the family. Riet, having just learned how to drive, took her fiancé on a ride which ended in an accident and the tragedy which changed Helmer's life. The father sent Riet away, while all these years Helmer has suffered on, milking cows, watching the sheep, mucking out the yearling's stall, and caring for the only animals he himself added to farm, two donkeys, perhaps emblematizing his own stubborn aloofness from life.

Helmer's world, in short, until the special day in 2005, has been frozen in time, as if with Henk's death this twin simply shut down.

Now, he suddenly sells two of his sheep, purchasing a map of Denmark to place on his bedroom wall. He takes down photographs, repaints floors and walls.

As Helmer proceeds with these gradual alterations to his home, we learn more and more through his awakening memories of his father's psychological abuse of both Helmer and his dead mother, and we gradually perceive other moments that help us to understand Helmer's sexual conundrum. One of his favorite moments of his youth, for example, concerns a hired hand who taught him to skate. What Helmer most remembers, however, is not the lesson itself, but the worker's hand against his "bum" and ultimately, the placement of his body against the boy's back.

The friendship between the two, boy and the hired worker, Jaap expands as Helmer visits the small hut where the worker lives. There is no sex involved, only a kiss, and the two talk of everything but sexual matters, but it becomes clear that Jaap is gay, and that Helmer's interest in him is centered in that fact.

The father, sensing something strange in the situation, fires the worker. In short, anyone who might have possibly demonstrated any love for Helmer or shown him any affection has died or been sent off!

Coincidentally, Riet herself writes, asking if, after all these years, she might come to see Helmer. She now has two grown daughters and a teenage son from the husband she has married after Henk's death.

Somewhat reluctantly, Henk agrees to a visit, after which she pleads for him to take on her son as a worker, perceiving of the boy's unhappiness in her home. Helmer vaguely acquiesces, and the boy, also named Henk, is suddenly sharing his quiet abode, where there is not even a television set.

Much like Helmer, Henk is also dissatisfied with his life, in part because of his boredom at home, and the transition he is himself undergoing—he is 18, probably the same age Helmer was when his twin died—and is unsure of his direction in life.

Helmer puts him to work, but the boy does not always accomplish his tasks, often sleeping in for the whole day. Yet the two do somehow get on, Helmer purchasing a television set, buying him wine, and basically permitting the youth to come to terms with the world in which he is involved. Ultimately, Helmer, imitating the bad habits of his young guest, takes up smoking. Henk even saves Helmer's life when the farmer is trapped under a sheep in a small stream.

It appears that Henk is also questioning his sexuality, as at one point he attempts to join the farmer in his shower, and for several nights crawls into Helmer's bed, refusing to return to his upstairs room which once belonged to the now-dead Henk.

Helmer, although a bit confused by the boy's action, refuses to return any affection, and Henk grows daily more angry about the relationship and his place on this farm. Is he a replacement of the other Henk, he assertively asks.

Although Helmer, unlike his father, refuses to abuse the boy, either verbally or sexually, the relationship between the two resembles Helmer's and his father's. Like Helmer, the young Henk is clearly unable to explore love in this environment.

As the situation begins to become more and more tense, Helmer writes Riet, telling her that he intends to send the boy home. Henk, however, rips open the letter before it is mailed, and burns it.

Yet in that act, he realizes he now has no choice but to go away.

This time Helmer himself has sent a source of love packing. As the boy bicycles off, moreover, Helmer's father dies (he has refused to eat for weeks). Suddenly Helmer is left in utter silence with no purpose to his life but the routine of chores.

Into this vacuum, Jaap returns for a visit.

Neighbors check in with the famer and a funeral of sorts (despite the father's insistence that he should be buried without one) is held, attended by more people than the son might have imagined.

Finally, Helmer begins to perceive a logic in all the recent changes he has made. Selling his cows and yearling, and arranging with the neighbors to care for his donkeys and sheep, Helmer goes off with Jaap on the first vacation of his life—to Denmark, where the two swim nude, share a double bed, and play cards in the evenings. There is no mention at all, once more, of sex. But it is clear that Helmer may have found a companion with whom to share his newfound pleasures, and the "vacation" seems to be open-ended.

Bakker does not end the book, however, with that kind of revelation. As Jaap invites him to join him in cards, Helmer takes another short voyage, walking to the sand dunes where the summer sun is in its slow set. Undressing, he takes a short swim, then sits on a dune to ponder the beauty of the world around him. Behind him he feels a presence, a warm breath; it is a sheep come to keep him company. Helmer knows he must get up and return, but the novel ends in his remaining there, peacefully sitting: "I am alone."

Although the twin has led an empty life, it was never been on his own, having been determined by all those around him until this very last moment of Bakker's quietly meaningful work. After all these years, the twin is now free to define his own future.

Posted by Douglas Messerli at 9:34 AM