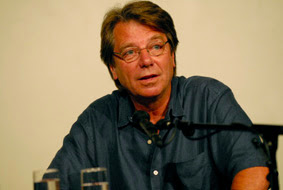 THE BLUR
by Douglas Messerli

Frau Markbrieter sits in a Vienna café with her sister Minna, awaiting the arrival of her daughter and other friends; Imre van Gyurkicz, painter and cartoonist, self-made man with a significant (if false) genealogy, is having an affair with violinist virtuoso Charlotte von Schlaggenberg; Charlotte’s brother, the writer Kajetan von Schlaggenberg is currently engaged in developing his theory of “The Necessity of Fat Females to the Sex Life of the Superior Man Today,” a theory which Councillor Georg von Geyrenhoff finds as scandalous and dangerous to contemporary ideologies; the wealthy widow Friederike Ruthmayer, one of the most respectable women of Vienna society, is roused from her bed one night by the wild carousing of a group of men and women known as “Our Crowd,” and joins them drinking cognac directly from the bottle; the self-educated factory worker (he teaches himself Latin, for example), Leonhard Kakabsa falls in love with a widow, Mary K, who has lost her leg in a streetcar accident. If these often slight and somewhat silly incidents and events seem, on first hearing, unimportant, almost meaningless, they are—along with hundreds of others—what make up the epic “story” of Heimito von Doderer’s great Austrian novel The Demons, a book of 1,329 pages I published in paperback in 1993 (and which I believe is one of three or four of my most notable publications). For few writers have so completely revealed the interconnected fabric of everyday life that results in often shocking and earth-shattering events—in this case the takeover of Austria by the Nazis and its destruction in World War II.

I begin with this great masterwork of fiction because while reading a translation in manuscript of Peter Rosei’s far briefer Wien Metropolis (Metropolis Vienna), I was struck by how similar it is to von Doderer’s work—at least in method and incident. Wien Metropolis begins almost at the moment that The Demons closes, at the other end of World War II, as two Austrian Nazi soldiers, Oberkofler and Pandura, wait out the night in a Polish mansion into which they and their compatriots have forced their way, presumably to drink up the remaining wine. That evening, as the Russians advance toward the town, these two strike up a conversation, beginning a strangely close friendship, which ends in their sharing an apartment on Josefstädterstrasse after the war.

I describe this relationship as “strange” only because, although the two are outwardly heterosexual—with Pandura described as a “ladies man” and Oberkofler developing a near sado-masochistic relationship with the beautiful Viktoria Strnd—they function as a team, as a kind of semi-comic duo (Laurel and Hardy spring immediately to mind) who run a local dancing and charm school for the entrepreneurial Leitomerizky. One night, moreover, Pandura screaming out in his sleep, is shaken awake by Oberkofler; Pandura, “still fully stupefied with sleep,” flings an arm around his comrade, pulling him forcibly down to him as the two engage in a kiss. Nothing more is made of this exceptional event; however as the relationship between Oberkofler and Strnd continues, Pandura threatens to move out; Oberkofler commits suicide by putting his head into an oven filled with gas.

Suddenly the narration shifts to Kalgenfurt, the Carinthian capitol city, the birthplace writers Robert Musil and Ingeborg Bachmann (whose own father became a Nazi six years before Hitler’s invasion), where we encounter another male couple, two young boys Alfred and Georg, both natural-born leaders, whose stories make up the heart of Rosei’s fiction.

Like Oberkofler and Pandura, these boys grow up—Alfred, short and broad-shouldered and Georg talk and lanky (in the Laurel and Hardy mold)—to develop a deep friendship as they attend the university in Vienna, a friendship which one day results in Alfred kissing his friend Georg upon the lips. Again, nothing is made about this event, and the narrative of their lives continues as if it has been of no importance. Alfred, we discover, is the child of Viktoria Strnd; the backer of Oberkofler and Pandura’s dance school, Leitomerizky (now a successful automobile dealer, with outlets eventually throughout the country) is, so he announces in Strnd’s prensence, Alfred’s father. The Jewish Leitomerizky and the Catholic Strnd had been deeply in love before the war, we are told, and for some time after the Nazi Putsch Leitomerizky successfully avoided capture; ultimately, however, he was sent to the camps, returning to Vienna as a survivor. Strnd has, we discern, created a real estate business which has sold Jewish property to numerous Nazis and continues in her these nefarious connections after the war. Later, Strnd denies Leitomerizky’s paternity.

I won’t describe all of the various interlinking stories and events this fiction conveys; as the narrator admits, in Vienna everyone knows everyone, and as in von Doderer’s fiction, Wein Metropolis weaves numerous lives together in a way that while describing everyday events reveals something far deeper. For we soon perceive that nearly all the figures in this book—all in some sense “survivors”—seek in others a kind of a love that is not always as sexual as it is based on inter-dependence. Both Alfred and Georg, at various times in the book, romance the wealthy young, sophisticated Klara Wohlbrück; neither of these young men seem actually to love her—each are slightly disgusted by her endless laughter and chatter—yet each develop a near-desperate need to have her near them. As Alfred breaks with Georg to travel abroad, Georg takes up with another young man, Stepanik, with whom he develops a successful advertising business. As that relationship, in turn, begins to wane, Stepanik turns gambling each night with a new friend, the elder Leitomerizky. Numerous other pairings appear and disappear, almost as in Schnitzler’s Hands Around or as in a grand Strauss waltz. The dance, for these alternating couples, is just that, a patterned performance that has little to do with emotional or sexual fulfillment.

It quickly becomes apparent that each of the characters living in this post World War II Vienna are seeking some sort of meaning in their lives, grasping at get-rich quick schemes and attaching themselves to other beings in order to fill their emptiness. As the older generation have already lost their way—Viktoria turning to alcohol and Leitomerizky to, at first, women, then to late-night partying, and finally to the Bible—the younger figures desperately try to carve out meaningful lives through vague political alliances (Alfred is fascinated by the German Baader-Meinhof Group, and, on his own, plots the death of a wealthy lawyer whose villa reminds him of the Wohlbrük villa back in Vienna—which, if he actually had joined political left, could be the subject of an entirely different essay) or social connections (Georg marries Klara, moving to a reconstructed villa with her and his mother); yet these couplings with individuals or organizations provide only ephemeral happiness. Like her mother, who later in her life retreats from her family by seeking out sexual partners each night on the Vienna boulevards, Klara retreats from Georg into her sick bed, finding a sexual outlet with her new friend and confidant, Professor Frodl. In the end nearly all the active players in Wien Metropolis are left alone in a kind of hazy vision of reality that Rossei describes effectively throughout the fiction in the pattern of Viennese sunlight dappling the trees, a pattern that blurs perception.

Rosei’s Vienna is not at all the black and white Expressionist-like world of Carol Reed’s film, The Third Man, a world reminding everyone—characters and viewers both—of that great city’s monstrous acts and the culture’s fall from grace. Instead, Rosei’s figures—caught up in a society of avoidance—pick up existence as if the War had not occurred, attempting to ignore or outrun their terrible past in a rush for money and success. Even in their achievements, however, they discover they have no lives, that their beautifully reconstructed city—as the novelist who drunkenly intrudes upon one of Klara’s salons argues—is “nothing but a playground of stupidity and beastliness, of beastliness and stupidity, where nothing but baseness ever prevails, or at best the ridiculous.” Too often, as in the murder by Alfred’s father (the only father he knew as a child) of a nearby neighbor and in Pandura’s violence against nonviolent protesters, that beast they attempt to hide terrifyingly reveals itself.

By fiction’s end, the reader comes to recognize that the two incidents of kissing I described at the beginning of this essay are emblems of an impossible search for innocent love, a child-like love, perhaps even a kind of narcissistic self-love that is not permitted for these Viennese survivors. Even the healthy working class passion between Johann and Maria Oberth ends in a cancerous-induced fog of forgetfulness.

Metropolitan Vienna is a culture doomed to death by the past and its refusal to accept responsibility for its acts. Like the frieze on the corner of Oberkofler and Pandura’s apartment, depicting “an oversized male head with the flowing beard of a prophet,” lips sealed, eyes wide-open in a blind stare, these figures of post-war Vienna are souls that have lost track of themselves in their “joy-crazed adaptation to existence.”

Rosei has brilliantly picked up were von Doderer’s fiction ended, only to reveal that nothing much has changed, except what once was a world of self-made men is now a society of men and women who create identity, like drowning beings, by grabbing on to anything or anyone they can.

For all that, we still feel for Rosei’s drowning damned, allow them to grab onto us through our distant imaginations, suffering some sorrow (in the cases of Oberkofler, Strnd, Leiotneizky, Fau Wolbrück, and Alfred) for their deaths and disappearances and sympathizing for (in the examples of Klara, Maria and Georg) their meaningless lives—even as we fear the tenacity of their empty aspirations. If, as one of Rosei’s character’s argues, the Holocaust is the most important event of the 20th Century, what might we fear and image for the century in which we now live?