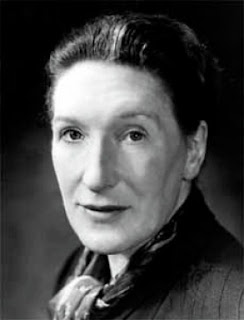 CAUGHT IN THE WHIRL
by Douglas Messerli

The title character of Elizabeth Bowen's deliciously written fiction of 1969 is an outsized woman, described variously by the author as "monolithic," "a giantess," and "an Amazon," along with other unflattering appellations. From the very first action, as Eva Trout drives the Dancey children past the castle she owns and where she was schooled for a short while, Bowen fixes her figure in our minds as a purposeful being constantly on the move: at the moment at the wheel of her Jaguar. The book is subtitled "Changing Scenes," a suggestion of the numerous shifts in location and emotional states of its hero. Even Eva's position in the car, as the author puts it, is "not, somehow, the attitude of a thinking person."

As we first glimpse this towering and overpowering figure, she is about to bolt from the household in which she had originally asked her guardian to place her: Larkins, the run-down farm house wherein reside the Arbles. Iseult Arble, a former teacher of the girl, is perhaps the first and only person who attempted to actually educate her; while Iseult's husband, the less than brilliant Eric, has grown comfortable with Eva's presence, he feels a growing tension with his wife, a shift that Eva interprets as Eric's attraction to herself.

In preparation for the move, announced to the Dancey family, while kept secret from the Arbles, Eva's London-based guardian, who has gotten wind of Eva's plans, calls Iseult to the city in order to plot a way to keep his charge from running off before inheriting, a few months later, the fortune left to her by her father, Willy. And the interchange between the two is one of the great moments of the book, as these most intelligent figures of the work attempt to comprehend and outwit one other. Constantine, as one might describe him, is a darker and more sinister version of Iseult, a man who clearly is used to hatching plots—although in this case he fails. For Eva rushes to the small town of Broadstairs, purchasing a house by the sea. But it is clear that this woman, incapable of even boiling water, will not be able long to care for herself.

Eva has left behind numerous signs of her destination, and both Eric and, soon after, Constantine follow her, the latter believing he has found the two in an uncompromising situation (in fact, Eric has simply taken a nap). Eric and Iseult divorce, just the first of numerous negative effects that this giantess will have on all the figures around her.

After gaining her inheritance, Eva travels again, this time to the US to purchase what is presumably an illegal baby, there coincidentally meeting up with her first love, a former fellow classmate, Elsinore, who is now married to a traveling salesman. Her encounter with Eva results in an expression of great unhappiness with her current circumstances.

Eva soon returns to England with her young son in hand, this time staying in a series of hotels. The child is a deaf mute, perfect for a mother who has little of intelligence to say, and who throughout the fiction is searching for someone upon which to shower love. In short, Eva continues to wreck havoc upon all those with whom she becomes involved.

For Eva, we gradually discover, is not so much a realist character for the author, as she is a metaphor of pure action, a big, clumsy, whirlwind of a figure of thoughtless motion. Those least able to act, the emotionally complex and introspective Iseult and the eldest Dancey child, Henry, a bright a witty boy who ultimately enrolls in Cambridge, are naturally attracted (if slightly disgusted) by this energized force. Eva represents precisely what these two are missing in their lives. Yet by nature they both fear her: Iseult is not at all amused by Eva's blank stares, and Henry chastises Eva several times for her failure to think things out. Yet both enter into strange commitments with this force. Iseult determines to read to the young Eva in hopes of opening her mind and, later, of course, opens her house to her. Against his better judgment, Henry agrees to play her husband in order to fulfill the fantasy of love and marriage for which Eva has so longed.

The disaster with which Bowen's fiction ends, the child murdering his mother with Eric's loaded and real gun, is somehow inevitable. For in a sense, the great vortext that Eva symbolizes must be destroyed in order that other, more normal figures, can survive. Ultimately Eva's son, Jeremy, would have suffocated in Eva's fantasy of love, and he would never have been able to return enough to fill the vacuum at its center.

Bowen reiterates the tension between the two kinds of people she has created with references to Victorian literature that both Iseult and Henry mention. Broadstairs, the town to where Eva first retreats, is the home of Charles Dickens, a place which Iseult later visits. Henry mentions Browning's narrative poem-play, Pippa Passes. These two authors could not be more different. Dickens' works, filled with motherless and fatherless orphans desperately seeking for love, are played out on huge stages of vast action that catches up its characters into circumstances that are nearly always extreme, very bad or very good.

Pippa, of Browning's carefully rhymed poem, walks through the city, singing songs that almost no one hears, but who changes everyone for the better as she invisibly passes. While the figures of Browning's work may be contemplating divorce, rape, murder, revenge, and other horrible acts, Pippa's very existence, for the most part, alters their awful plans.

Iseult must certainly see herself more as a Pippa than a Dickensian figure, while Eva, it is clear, is a 20th century equivalent of more than one of the great novelist's desperately needy beings. Iseult's feeling that she has somehow magically connected to Eva's son Jeremy, is perhaps a kind of Pippa fantasy. But Iseult, in the end, does find some sense of balance, returning to Eric.

Henry, like Constantine is too cynical to see himself as aligned with either, but the family in which he has grown up behave much like a series of Dickens' comic characters. But he, like Constantine—who changes in the process of the story from a wicked controller of others to a man in love, in his case with a priest—is so thoroughly effected by Eva that by work's end, he is ready to really marry her instead of simply mimicking the act. Eva, drama itself, may be wonderful to contemplate, but it is impossible to have and to hold.