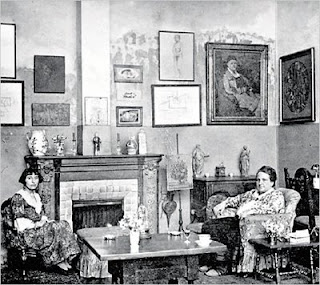 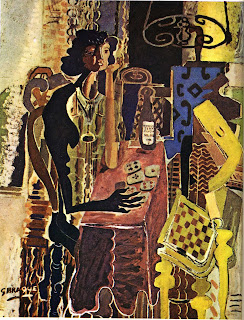 DISTRIBUTION AND EQUILIBRATION IN STEIN’S THREE LIVES
by Douglas Messerli

Gertrude Stein’s brilliant study of the lives of three women, motivated, in part, by her reading of Gustave Flaubert’s Trois Contes, is a deceptively simple work of fiction. This, the first of her works published in book form (1909), ostensibly tells simple and fairly straightforward stories of three women. The first tale, “The Good Anna,” relates the story of a simple, if scolding, German working woman, who serves three different individuals throughout the tale—Miss Mathilda, Miss Mary Wadsmith, and Dr. Shonjen—while also developing close friendships with Mrs. Lehntman (the “romance in Anna’s life”) and Mrs. Drehten, as well as caring for various dogs and serving girls. The most difficult of the three stories, “Melanchtha,” tells of a mulatto woman and her love for a black doctor, Jefferson Campbell, despite the pulls of “wondering” and “excitement” with shady figures such as Jane Harden and Jem Richards; in the end, the thoughtful and complex Melanchtha loses the love of Campbell and the friendship of Rose Johnson because of her adventurous ways. The third tale, “The Gentle Lena,” is perhaps the simplest of the three, as Stein narrates the life of a “dreamy” and basically unthinking German girl brought to the United States by her cousin, who marries her off to a mamma’s boy who does not enjoy the company of woman; despite these facts, Lena bears him three sons before she dies in childbirth.

Most commentaries of Three Lives have centered on the present-tense narrational structure of the tales using Stein’s own comments from a lecture twenty years after writing these pieces, “Composition as Explanation (1926),” a work seemingly centered on Stein’s ideas of the definition of character as beings in action, which, for this author, is related to her concept of behavioral repetition slightly altered each time it is repeated:

Referring both to Three Lives and her long fiction, The Making of Americans, Stein describes the process she would use throughout much of her early writing and which influenced her later work:

In the first book there was a groping for a continuous present and for
using everything by beginning again and again.
There was a groping for using everything and there was a groping for a
continuous present and there was an inevitable beginning of beginning
again and again and again.
Having naturally done this I naturally was a little troubled with it when I
read it. I became then like the others who read it. One does, you know, ex-
cepting that when I reread it myself I lost myself in it again. Then I said to
myself this time it will be different and I began. I did begin again I just
began.
In this beginning naturally since I at once went on and on very soon there
were pages and pages and pages more and more elaborated creating a more
and more continuous present including more and more using of everything
and continuing more and more beginning and beginning and beginning.
I went on and on to a thousand pages of it.

In the introduction to my Green Integer edition of 2004, Lyn Hejinian, following the lead of Donald Sutherland and other early Stein critics, approaches Three Lives in just this manner, relating it to Stein’s ideas of composition as a continuous present. Yet Hejinian also convincingly connects these tales to Stein’s relationship with art, in particular the Portrait of Madame Aubin by Cézanne, which hangs upon Stein’s drawing room wall, glimpsed in one of the most famous of the photographs of Stein and Alice B. Toklas. Quoting Stein herself— “Everything I have done has been influenced by Flaubert and Cézanne, and this gave me a new feeling about composition”—Hejinian also refers to critical commentary by figures such as Joachim Grasquet, who described “Cézanne’s ability to convey his subject’s inner experience, his ability, as it were, to paint time.” Similarly, in his early study of the author, Sutherland describes the stories, particularly “Melanchtha,” as having the weightiness of Cézanne’s apples and pears.

Perhaps if we think more broadly about the idea of composition of Stein’s, separating it from her obvious use of the “continuous present, and focus instead on her comments, introduced at the end of her “Composition as Explanation” essay, on “distribution and equilibration,” we can more clearly understand the relationship of Stein’s work to visual representation.

Throughout, “The Good Anna,” for example, we discover that this serving women is attracted to certain kinds of individuals, involving herself in a pattern of relationships that one might also describe as magnetic-like forces which Anna cannot resist. The women with whom she works best, and to whom she is even romantically attracted—Miss Mary Wadsmith, Miss Mathilda, and Mrs. Lehntmann—are opposed throughout the book to those for whom Anna sees herself as unable to work for, Mary’s neice Jane and Dr. Shonjen’s wife. Stein capsulates these differences in terms of various adjectives and adverbs throughout her tale: Anna is described as scolding, hard, short of temper, conquering, magnificent, grumbling with a high voice, a woman with a small, spare, worn, and awkward body, her thin cheeks, sharp and clear; her life, we are repeatedly told, was “an arduous and troubled one.”

In opposition to those qualities, Stein early on tells us that

Anna found her place with large, abundant women, for such were always
careless or all helpless, and so the burden of their lives could fall
and give her just content. Anna’s superiors must be always these large help-
less women, or be men, for none others could give themselves to be made
so comfortable and free.

Predictably, Miss Mathilda is described as a “large and lazy woman,” with a “cheerful, lazy temper to be always without care.” Mrs. Lehntman is “bland, impersonal and pleasant,” a woman slack, “diffuse, and careless in her ways.” Mrs. Drehten is patient, homely, stalwart, cherry. Anna likes men such as Dr. Shonjen, moreover, because they “could eat so much and with such joy”; “And then they were warm and full, they were content, and let her do whatever she thought best.” In short, Stein balances her characters as would a painter placing groups of people or objects upon his canvas. The thin and sharp placed in apposition to the round and slack, the scolding conqueror set against the lazy and the large. Perhaps rather that depicting on the cover of the Green Integer edition Stein in her apartment in a vertical position in relation to her Cézanne painting, if we had presented the picture horizontally, portraying a vast distance between the heavyset smiling Stein and the thin, slightly dour- looking Alice B. Toklas, we might have more completely represented the structure of the first of Stein’s Three Lives, where figures are distributed in equilibration.

Stein’s great story “Meclantha” also contains numerous instances in which characters are in type and size are drawn or repelled to one another: Meclantha is clearly attracted to Jeff Campbell because of his thought processes, his need to think things over, while she is often a dreamy wanderer who has a hard time “remembering.” Early on it the story she is drawn to Jane Harden because she can help her to become “understanding,” and later she is pulled toward another of Stein’s lazy, selfish women, Rose Johnson, in part, because they are true opposites, Melanchtha being “complex” and yet obedient, almost servile in her presence. Yet if we look for the kinds of sculptural balances that we have witnessed in “The Good Anna,” we will be disappointed in this longer story. The idea of distribution and equilibration does not work in the same way.

Recent and often younger critics have often represented Stein’s story of a Baltimore black woman as being racist, and there certainly are elements in the writing that might be interpreted as such. Some of the descriptions of Rose Johnson, for example, seem, upon first reading, to be stereotypical white myths of black behavior:

Rose Johnson was a real black, tall, well built, sullen, stupid,
childlike good looking negress. She laughed when she was happy
and grumbled and was sullen with everything that troubled.

In Melanctha’s position as a mulatto, there is often a suggestion that she is superior to her black friends, and even Rose, raised by whites, notes of herself “No, I ain’t no common nigger.” Yet, despite these uncomfortable passages, one does not at all get the sense that Stein is herself judging these figures, and her sympathies for Melanctha have less to do with Melanctha’s racial mix than with her natural intelligence and almost desperate search for meaning. Given the situation of Southern Blacks in the period in which this story was written, 1905, it is indeed an amazing feat for a white woman to be writing of a sexually mature black woman, who is not only intelligent but is represented as seeking out knowledge (both sexually and spiritually) through what Stein describes as “wandering.” Against her stands not only the entire white world, but the black bourgeoisie and their complacency, evidenced particularly by doctor Jefferson Campbell and the declaration of his desire for his race to not go about seeking “excitements,” and by Rose Johnson’s eventual abandonment of her friendship with Melanctha, primarily on the basis of gossip. Rose may be “no common nigger,” and Jefferson a good man who hopes to help his people, but both find it impossible to hold and embrace this prototype of a feminist hero, who throughout the work desperately seeks to understand the world about her from both blacks and whites.

Rather than distributing her figures in “Meclantha” in terms of their size and psychological qualities, Stein uses the compositional method of color and the effect these colors have upon each other. Meclantha’s mother is “pale yellow,” she herself is sometimes described as yellow, at other times as brown. Jefferson is also brown, sometimes black; Melanctha’s father is a dark black. As the representative of the worst of bourgeois attitudes, rose (Rose Johnson) is opposed to Meclantha, who as the story progresses, becomes more and more “blue,” the two major colors, not so coincidentally, of Picasso’s early paintings. In its palette “Melanctha” reminds me somewhat of the 1942 painting, “Patience,” by Georges Braque, a portrait of another tormented woman.

In short, Stein uses color in this story the way she used weight in “The Good Anna,” as a method of distributing her characters in “equilibration,” representing them in a state of balance or of opposing forces.

By the time she completes “The Good Lena,” the shortest work of the three, Stein has almost dispensed with any compositional method, in part because her central character does not seem to really exist. Lena is not only described as being “dreamy” and slow of mind, she is literally “not all there,” a character in name only. In a sense Lena is an abstraction, a thing which her aunt, Mrs Haydon, collects, just like the objects purchased by so many American tourists, on her trip to Germany. She is of use, upon their return, only as a kind of test case for Mrs. Haydon to discover if she can arrange a marriage, an act she must soon accomplish for her own two monstrous daughters.

Equally without substance, Lena’s husband Herman Kreder is forced to give up his life to his mother and father, having nothing of his own except for the three children Lena produces before she dies.

At the heart of this story, accordingly, is a vast emptiness, almost a vortex of energy that leaves us only with an abstraction. Like Picasso and others who during this same period were moving away from naturalist presentation, and like the Vorticist artists of some years later, Stein would increasingly shift, after this work and The Making of Americans, into a creative process where her images (of words) no longer represented naturalist figures, but created meaning in relation to their placement to one another in space.

Posted by Douglas Messerli at 9:53 AM