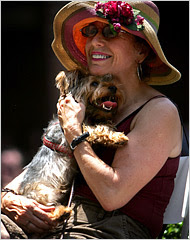 Let me begin this short essay with a strange apologia: normally I would not have read a book like The New Yorkers by Cathleen Schine, predicting that it would not hold the complexity that I seek in art. However, when I began working on these cultural memoirs, I determined that I would also try to pay some attention to popular culture, and in a year devoted to the theme “To the Dogs,” it was impossible to ignore a book reviewed in The New York Times Book Review under the title “The Year of the Dog.”

Indeed, this work does not hold any complexity. To even mention that word in the context of this novel seems ludicrous. For the characters of Schine’s New York are so thinly drawn that one is almost afraid that the breath one uses in reading a sentence aloud might blow the whole scene off the page.

In New York’s Upper West 70th streets, Jody, who begins the book at age 39, is beginning to describe herself as a spinster, when suddenly she discovers her 50-year-old chemist neighbor, Everett, to whom she takes a liking. Having broken up with her lover, Chris, 26 year-old Polly moves into the neighborhood, bringing with her brother George, who, having been dismissed from a job as a waiter, now works as a bartender at the local Go-Go Grill. The Grill is run by a gay man Jaime, who with his partner Noah, is raising a rather large family of their own and adopted children. Another local, Simon, sits lazily on a park bench in Central Park. The wealthy neighborhood busybody, Doris, meanwhile, goes about the neighborhood with a scoop and plastic bag, gathering up discarded bottles and excrement left by her neighbor’s dogs.

Almost before Jody can establish a relationship with Everett, Polly sweeps him up, while Jody turns to Simon. George moves in and out of brief relationships with women without being able to discover what he wants to do with his life. Chris remarries, Doris gets angrier and establishes a neighborhood watch group to restrict the dogs in the park and ban them from local restaurants such as the Go-Go, while Jaime and Noah blissfully continue bringing up their brood. When Simon tires of Polly, he escapes to Virginia; Polly determines to break it off with Everett; and George, asked to help train Alexandra’s (the woman who fired him) pet, discovers a new career—as well as a new companion. Jody and Everett finally come together, fall in love, and marry. Doris—the enemy of all canines—begins to breed teacup Pomeranians. The End. The New Yorkers, raved The New York Times Book Review, is “a redemptive fairy tale of urban loneliness.”

Admittedly, my brief summary is missing an important element of the book. But in terms of human characters it’s pretty accurate. They do little more throughout the work than walk the streets, visit the Go-Go Grill, and fall in love. Although we are told that these figures do sometimes take in local films, not once do they singularly or collectively discuss any aspect of cultural life. And only one character, Jaime, mentions a literary work, quoting a line from the pop-poet Billy Collins, whose blurb on the back of the book describes Schine’s work as “charmingly immortalizing” the neighborhood upon which she focuses.

The real characters of this work, if they can be described as such, are the dogs owned by Jody, Polly, Jaime, Alexandra, and Doris, and cared for by Everett, Simon, and George: Beatrice, Howdy, Jolly, and others. And the reader is provided with a little more information about these beasts—an agèd blue-eyed pit bull, a loving puppy discovered in the closest of the apartment Polly rents (owned evidently by the previous tenant who recently committed suicide), and a schizophrenic terrier who alternates between expressions of gentleness and violent biting of its own tail and people’s faces. It appears that the author has centered her book around these dogs more as devices to bring her characters together than for any thematic purpose. The most profound level to which this novel ascends is to repeat the old saw: people often project their own joys and fears upon their pets. As Everett explains to Jody:

“When Emily [his daughter] was little, she used to tell her troubles to
a little stuffed dog.”
“I suppose this isn’t too much different, is it?” Jody said, pulling gently
on the leash until Beatrice stepped gingerly forward.
“Just a whole lot of projection?”
“Well, yes. But what I really meant was love.”
Everett noticed with relief that the church group was gone, and he left
Jody and Beatrice at Simon’s door, then walked thoughtfully across the
Street. Love. Projection. Who was to say they were not the same thing?

Some readers will accuse me of asking too much from what might be deemed as an amiable satire. But even here, as a reader, I come up empty-handed. What is The New Yorkers satirizing—New Yorkers in general, New Yorkers who live on the West Side in the upper 70s, people who own dogs? I happen to know several people living in that very neighborhood who bear little resemblance to the stick figures Schine describes. And as satire this work is so gentle that any rubs can be brushed away as easily as a lipstick kiss planted upon one’s cheek.

If I ask more of this fiction, I fear I may come off as an ogre akin to the mean-spirited Doris. Although I have a cat, I must report, I too like dogs, and I am sure that if I were to encounter Howdy, like Everett, I might—doggone it!—fall in love. However, even here I may be too churlish, for my Webster’s Encyclopedic Unabridged Dictionary has just told me that the word "doggone" has nothing to do with dogs, but is a euphemism of “God damn,” with a meaning akin to declaring “confounded!” I am not in the least confounded, and there lies the rub. I guess what I really meant to say was “aw shucks.”

Posted by Douglas Messerli at 9:59 AM