Douglas Messerli | Holding In, Holding On (on Mario Benedetti's The Truce) 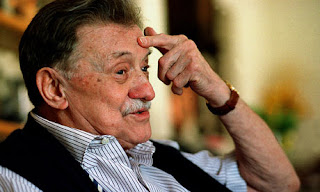 HOLDING IN, HOLDING ON
by Douglas Messerli

Mario Benedetti The Truce: The Diary of Martin Santomé, translated from the Spanish by Harry Morales (read in manuscript)

I have just finished reading Mario Benedetti's 1960 novel The Truce for the third time. I first read Benjamin Graham's translation, published by Harper & Row, sometime in the 1970s. In 1996 translator Harry Morales sent me a new version (which he revised again in 1998), restoring what he described were missing passages in the Graham translation, and retranslating the entire text. I read this new version with great pleasure, and offered to publish the book on Sun & Moon Press. We offered a $1,000 advance to Benedetti through his agent at the time, Thomas Colchie, but Benedetti inexplicably rejected the offer, Colchie responding that he could not dissuade the author from that decision. Both Morales and I feel it may have had something to do with Benedetti's anti-Americanism. So ended by brief "relationship" with the great Uruguayan author.

Upon hearing of Benedetti's death on May 16 of this year, I momentarily thought of opening my files and contacting Harry Morales again to see if he had ever found a publisher for his version of the book. A few weeks later, Morales called me, soon after providing me with yet another revised version of his translation, which I finally completed reading this week.

Accordingly, I feel I now know this fiction well enough that, whether I end up publishing it or not, I should write something about the book in memory of its renowned creator.

Few major characters are as unassuming, unpretentious, and outright boring as Martin Santomé. When one first meets him in the pages of his private diary, the reader might almost give up a yawn to this bookkeeper's calculations about his retirement and his unimaginative speculations of what he might do when he stops working:

Do I really need leisure so much? I tell myself no, that it's not
leisure that I need, but the right to work at what I love. For example?
The garden, perhaps. It's good as a restful activity on Sundays, for
counteracting sedentary life, and also as a secret defense against my
future and guaranteed arthritis. But I'm afraid I couldn't bear it every
day. The guitar, perhaps. I think I would like it. But it must be lonely
to start studying music at forty-nine. Write? Perhaps I wouldn't be too
bad at it, at least people usually enjoy my letters. And so what? I can
imagine a short bibliographical note about "the worthy values of this
new author who is nearing fifty" and the mere possibility of it is
repulsive.

From the first words penned to his journal, we already know Santomé is a man of no special talents, no great imagination, and so equivocal about every aspect of his life that he can make no significant decisions.

Nonetheless, before long we are drawn into his diary as he describes his children, his dead wife, and his office companions, none of whom does he know very well or has any deep relationships. Like almost all office workers, Santomé complains of the boredom of his job and his treatment from his superiors, yet, as the head of his department, he is a good worker, and it is, accordingly, hard to imagine what else he is good for.

His relationships between his sons Jaime and Esteban are fractious, Esteban seemingly destined to be an office worker with even less imagination than his father. Jaime, as the story develops, is discovered to be gay, and is virtually disowned by Santomé. Indeed, this son leaves home, never to be seen again. Only Santomé's daughter seems to have serious communication with him, but she has just fallen in love and has little time to devote to her father.

For all of the insignificance of Santomé's life, however, we begin to understand his series of indecisions as being related to his moral character. He is a caring and careful man, but in his equivocation simply unable to express those feelings to anyone. But given the perversities of his acquaintances, particularly his friend Vignale, who begins an affair his sister-in-law living in his house, Santomé is nearly a saint, albeit a saint with few temptations put in his way.

In short, Santomé has given away his life, never challenging himself to live up to his dreams, perhaps never having significant enough dreams in the first place. He can hardly even remember the face of Isobel, his dead wife.

It is wondrous, accordingly, that he gradually falls in love with a new employee, Laura Avellaneda. But even here his relationship begins with temerity. At first she does not appear as a beautiful woman, but slowly he begins to enjoy her company, seeing her as a whole being, suddenly slipping into a friendship which promises something beyond his own expectations. When it dawns upon him that he is truly in love, he is amazed by the possibility.

Here again, however, the two, working together, must meet covertly, must spend much time in cautious hand-holding rather than a sexual relationship. The difference in their ages, Avellaneda being a young woman just beginning her life, forces him to suggest an open relationship, in his reasoning a way to make it possible for her to leave him as he ages. When a friend suggests his lack of commitment to marriage is simply a way to protect himself from possibly being hurt, Santomé recognizes the truth, but having purchased a small apartment for their meetings, it has become too late for him to change, he feels, the nature of their relationship.

In fact, one might argue that everything upon which Santomé acts is too late. The love between the two actually blossoms into a kind of happiness which the narrator has never known before, but the moment he realizes this new-found joy, the moment he becomes determined to act out of impulse, asking Avellaneda to marry him, she becomes sick and dies. His temporary rebirth withers before his eyes.

Throughout Benedetti's slow accumulation of the details of Santomé and the figures on whom he writes, we grow almost fond of this over cautious Bartelby, who has suddenly found a way to say "yes" to life. For men like Santomé, however, there is perhaps no possible way out. Their very equivocation of life means that they will not experience life itself.

Benedetti's Montevideo, indeed, seems filled with just such people. One of the saddest episodes in the entire work is when, weeks after his lover's death, Santomé visits her father, a tailor, and her mother, neither of whom have ever met him. Both reveal, privately, their own failures at having been unable to express themselves to their living daughter, the father admitting that he had always intended to tell Laura of his love, but continuing to put it off until now he has lost his chance of expressing it. The mother, who senses who the strange is, tells an even more tragic story: she once had a lover, but had told him to go away. The daughter of that man, Avellaneda was all she had to remember that lost love, the possibility of true joy in her life:

"Laura was all I had remaining of him. Again, that's why I feel
that the heart is an enormous entity which starts in the stomach and
ends in the throat. That's why I know what you're going through."
....She was looking upwards and crying, without passing her hand
across her face; she was crying proudly.

Those tears are the closest Benedetti's figures come to outrightly expressing the horror of their empty lives. The fiction ends where it began. No change has been possible in such a world of holding in while holding on. "Starting tomorrow and to the day I die," Santomé writes, "time will be at my disposal. After so much waiting, this is retirement. What will I do with it?"

Posted by greenintegerblog at 9:22 AM