Douglas Messerli | How to Destroy Your Children (on Jonas Lie's Niobe) 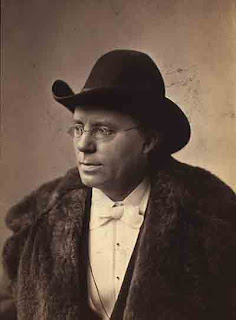 HOW TO DESTROY YOUR CHILDREN
by Douglas Messerli

Dr. Borvig and his family live a comfortable life in a small Norwegian town. Like many in their financial position, they have the normal bourgeois aspirations for their children: that they get a good education (they have hired a tutor for the lower-level schooling of their children and have sent one of their sons to the university), that their children grow up to be productive figures in the community of their choice. Borvig and his wife Bente, in short, appear like many modern couples, to have together and separately pampered and spoiled their offspring.

The son at the university, Endre, has changed his educational focus several times, abandoning, after three years, training for the Church to take up, instead, philology. As the novel opens Endre has written his mother—with whom he clearly has deeper ties than his father—that he has found his true avocation: singing. Borvig is outraged and refuses to send him more money, while his mother determines she shall help him by taking from her own savings.

The doctor feels fortunate that his other son—whom we soon discover is his own favorite—is successfully running a local mill. But Kjel also has hazy dreams of power, determining to ingratiate himself with local businessmen who might invest in his projects. We quickly see that his expenses from entertaining and gambling are even more costly than Endre’s shifts in education. And later in the novel, when he convinces the father to invest in a timber deal, his shady dealings become apparent.

Minka, their teenage daughter, has her own problems: she is terribly bright but is also highly excitable. Living a life at once protected and, in educational terms, utterly progressive, she is confused by the issues now suddenly facing her regarding sexuality, politics (in the form of women’s rights) and what used to be called the life of the imagination—a world of great music, art and literature. The tutor, Schulteiss—a slightly grotesque, hunch-backed figure—is secretly in love with his eldest pupil, and conspires with her mother to protect her innocence, which, at the same time, further pushes the young girl towards a world she intellectually conceives but knows little about.

The arrival of two outsiders, the fashionable and liberated writer Thelka Feiring (come to serve as governess of another local family) and Varberg, an engineer come to plan the new railroad, further stirs the waters at Elvsæt, the Borvig house. Thelka, admired even before her arrival by Minka, is a force of sunlight in the Borvig world; Kjel quickly charms her and they are married. Varberg, on the other hand, is a dark-eyed, meanacing presence who effects everyone with a sense of paralyzing drowsiness. We soon discover, in fact, that Varberg believes in Mesmerism, spiritualism and other “crackpot” theories that challenge the family’s more conventional philosophies. His power over Minka is quickly noticed, and Schulteiss, in particular, ineffectively attempts to intervene.

The return home of Endre from the university, soon joined by friends, brings further tension into this innocent-seeming family, as one of his acquaintances, Finsland—himself a sort of intellectual fraud—is also attracted to Minka, and finds himself in intellectual combat with the taciturn Varberg. As Kjel and Thelka’s marriage begins to disintegrate, and Borvig gradually must face the fact that his son is near financial disaster which, in turn, will involve him, through his loan, in the scandal, it becomes apparent that the doctor and his wife have indirectly created a three-headed monster in their children that can only terrorize them. A mysterious fire at the mill, protected by insurance, temporarily saves son and father from scandal. But the event breaks the older man, and he and his wife determine to protect their younger three children by sending them away to technical school for a more practical upbringing. A short time after, he dies.

Endre, whose career as a singer has failed miserably, returns home for good, and Minka, having gone off in search of love, also returns, “uncontrollably nervous in her speech, sensitive in every fibre….,” “Full of imbecile theories and notions….” Kjel’s fraud, meanwhile, has been discovered by local authorities, and he faces “penal servitude.” As the distressed family copes with Kjel’s impending arrestment and Endre’s lack of a future, Minka reveals that she has agreed to marry Varberg, a decision over which, she claims, she has no control.

Recalling that her youngest son, Arnt, had left a tin box of dynamite cartridges in the lumber room, Mrs. Borvig, “with a wild cry of terror,” strikes the box with an axe, the explosion leaving the house in ruins, “and among the logs and splinters…four crushed bodies—those of Mrs. Borvig and her three grown-up children.”

Lie’s grandly operatic novel is, at the same time, an acutely-tuned realist work that functions—given the backdrop of an everyday bourgeois family—as a believable psychological study in how children are destroyed by the very people who most love them. In the context of my discussions (in My Year 2004) of Holden Caulfield, Lolita, and Malcolm, and of Hitchcock’s film Shadow of a Doubt, we recognize that there are numerous forms of child abuse—among the worst is the blindly conventional, over-protective love of some families. It’s not simply that these children were spoiled, that they were over-indulged, but that they were led into a real world with highly idealized concepts and aspirations which, when they did not accord with reality, forced them to react deceitfully and deluded.

Fin de siècle family life in Norway, we discover, was not so very different from American life in the 1950s—or even at the turn of the 21st century. Again and again we learn, reality cannot be perceived merely through ideals and education.

Posted by greenintegerblog at 8:10 AM