Douglas Messerli | "The Intrusion" (on Julien Gracq's The Castle of Argol)

Described by its author as a fiction using obvious literary references (Wagner, Nietzsche, Poe, and others) around the belief that the redeemer-savior is often also the destroyer, Gracq's work is, on another level, a highly romantic homoerotic tale. A young man of great wealth and intelligence, Albert, purchases a castle and the surrounding landscape. He moves into Argol and immediately perceives its mystery and magic-like surroundings, particularly the nearby forest of Storrvan, which appears as a threatening overgrowth of towering trees. 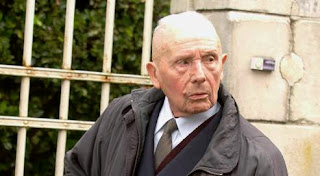 Suddenly he receives a message that his dear friend and soul-mate Herminien is planning a visit—along with a stranger named Heide. Herminien and Albert, who have roomed together as students, see themselves as almost twins, each able to intellectually stimulate each other beyond the range of all others, and each able to read one another's deepest thoughts.

As Albert prepares for their arrival, he visits the nearby desolated seashore, discovering there a graveyard. On the surface of one tombstone he inscribes the name of the strange visitor: Heide. Clearly, Heide is already an intruder; but upon her arrival he is mesmerized by her beauty and intelligence. Over the next months, a deep relationship develops between the two, galling and festering hatred in Herminien, who simultaneously recognizes that he has brought Heide to Albert for his friend's tacit approval and for sharing his love for Heide.

But Albert also seems strangely aloof and cold with regard to Heide's sexuality. One afternoon Heide and Herminien sneak away into the forest, failing to return by sunset. Intrigued and almost hypnotized by their disappearance and the forest itself, Albert follows them into the dark woods, only to discover the body of Heide, brutally raped by his friend.

He takes her back to the castle and nurses her to health. A long time later, they both follow a cleared path through the forest and discover the body of Herminien, who has been thrown by his horse. He too is returned to the castle and restored, but a new hatred develops in Albert regarding him. Heide remains secluded in her room, obviously unable to face either of them, while Herminien and Albert return to their conversations. Heide commits suicide, and they bury her in the seaside graveyard. Herminien determines to leave, but Albert follows him into the wood, putting a dagger into his side. A brilliantly abstract and hallucinatory tale.

Posted by greenintegerblog at 9:46 AM