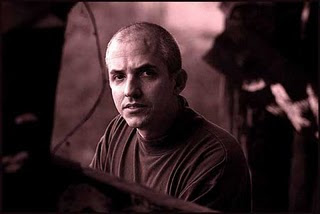 Antonio José Ponte In the Cold of the Malecón and Other Stories, translated from the Spanish by Cola Franzen and Dick Cluster (San Francisco: City Lights, 2000)

The title story of the volume of stories, In the Cold of the Malecón by Cuban Antonio José Ponte is indicative, perhaps, of the subtlety and themes of these short tales as a whole. In a fashion that might remind one of a short dialogue by Beckett or even Ionesco, a wife queries her husband concerning his visit to their son—not only about the look of his apartment and the food they ate, but how it was cooked, and, most particularly, about their activities after dinner. It is apparent from the start of this dialogue, however, that the wife has already heard it many a time, and when, and the tale's end, she asks her husband to repeat a section, we know it is a never-ending ritual, that the recounting is something they repeat over and over to wile away their own empty lives, their own loneliness. But for the reader, the details of the visit reveal, on the surface, very little. The son lives in so small of an apartment, his father claims it could almost fit into one of their rooms. There is no evidence of any other person in their son's life. The son chopped the meat they had brought him into small pieces and had eaten it rare, not wanting "to lose the blood in cooking." After dinner, the father—in what appears as an absurd request—asks to see the "whores again." He is told that it is a bad night for walking along the Malecón, the sea, with the surf so high; they may not see any. Yet the two do go out and spot a few prostitutes along the sidewalk. One of them looks at the son, for just a moment, the father explains, "Like when you mistake someone in the street and realize the mistake immediately." The two then return home for a welcome cup of coffee.

It is the very "strangeness" of this seemingly meaningless tale, retold over and over by the couple, that forces the reader—at least this reader—to reread the tale in search of greater significance. Obviously, since the father has brought the meat with which the son so carefully cooks, it is something precious; as we discover throughout these tales, nutritious food, as well as space, is a rare commodity in contemporary Cuba. But why the fascination with whores? The woman realizes her mistake in even looking at the son: is he that disinterested in appearance? Is he gay? And why has the father insisted upon seeing them? Quite obviously they represent something outside normality, something unusual in the parents' experience, something, perhaps, not only sexual and immoral, but—in their illegal activity—more open and free? Ponte provides the reader no explanations. The parents' conversation is, in fact, absurd; but then, as the author makes it quite apparent, so too is contemporary Cuban society.

In another story located by the beach, two brothers, awaiting the return of their father (the parents have evidently gone off to care for a sick relative or friend), rearrange the furniture each night, alternating their arrivals into a totally dark room through which they must pass without bumping into the rearranged furniture to reach the light. Ponte pushes this slight tale into nearly metaphysical dimensions, as the reshiftings of the room come to represent a break in the relationships of objects, of past to present, of action to life, as at story's end the older of the two boys discovers in the dark a door "that's never been there before," which he opens and "advances among the souls."

In "Station H," an old man arrives by train at a desolate station to play a game a chess with an unknown opponent, who turns out to be a young boy. But the old man never meets him, the game is never played. The old man disappears and the young boy makes away with the chess set the old man left. "This Life" is about individuals who ride the trains, almost like hobos of the American 1920s and 1930s, with no fixed destination and no apparent reason save poverty and utter boredom. The best story in this collection, "Heart of Skitalietz," goes even further in its absurdity than the others, as a despairing employee of an "institute" misses days of work only to discover, upon his return, that his office has been moved, most employees let go, and his own job terminated. Like the "disinherited wanderers of Russia," the Skitalietz, he begins to wander the streets of Havana, encountering a dying woman—an ex-astrologer who he first met via a crossed telephone connection—with whom he develops a strange relationship. But as their wanderings through often blacked-out sections of the city verge more and more on anarchic behavior, they are arrested and taken away to clinics where they might be resocialized. Released, the hero is called to take away his friend, now near death. They return to her apartment, stripped of all objects in their absence, where he places her against the wall and rushes out to buy a bed. By the time he has returned, she is dead.

Ponte's tales in this volume are not just about purposelessness, about individuals fed-up with their lives seeking pleasure and freedom; in the world this author conjures up everything has been shifted about so completely, so many times, there is no definition even of what enjoyment and freedom might look like. What is change in a society that, while incessantly shifting, never changes? What is freedom in a world in which the individual is left only sexuality as an independent political act? In a world in which great actions have led to nothing, little acts mean everything—while resulting equally in nothing at all. Death becomes the only relief, something from which the survivors have no choice but to walk away in a kind of silent envy and respect, leaving the door open.