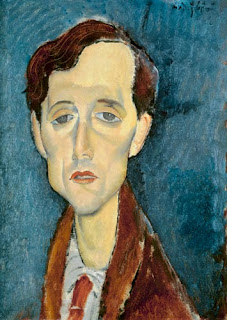 Although he is little known today—even in his native Belgium—Franz Hellens was a recognized novelist the 1920s through the 50s in his homeland; without Hellens's existence, notes fellow Belgian Henri Michaux, he would never have written his own first book. Author of over 100 books of fiction, poetry, essays, plays, art criticism and other genres, Hellens's most noted works are the surrealist-fantasy Mélusine of 1921, Le Naïf (with an introduction in the Italian edition by Giuseppe Ungaretti) and Moreldieu of 1946.

Memoirs from Elsinore (1954) is from the very beginning the kind of novel where you know the narrator is not only unreliable but is going to precipitate a great many disasters, and, accordingly, an uneasy feeling settles over this book from its first pages. The young Hamlet of this novel, Théophile, is a chubby and extremely healthy terror, whom his parents immediately dub as "the monster." His relationship with his mother is nearly incestuous; but it is his shock at seeing his work-horse of a father unexpectedly cry in his presence that haunts him throughout the early part of his life. The father soon dies and the uncle quickly enters the scene to marry the widow. Not unlike Hamlet young Théo is as suddenly sent off to school, a Jesuit boarding school in Antwerp. Fortunately (or unfortunately for the other figures of the book) Théo is allowed visits with his mother's cousin, Jean, a local canon, but also a free-thinking alcoholic with a live-in maid-mistress, the bosomy Toinette. Expectedly, Théo makes trouble at the school, forcing a young schoolmate to steal for him a poisonous snake he has seen at the zoo, and, with money from the Canon, he is off on a truly monstrous career. He returns home (snake in hand) only to have his arm blown away by an old grenade in the attic. His revenge on his step-father is now determined, and, having put the snake in the protection of his beloved Séraphine—the gardener's daughter—he plots patricide. But before it can be completed, his Ophelia dies by the sting of the viper. Now in revenge for his own father's cuckolding, his mother's honor, and his young beloved's death, he plants the snake in his uncle's bed and the inevitable occurs.

Ousted from Eden, Hellens's young Hamlet begins his voyage through life. Théo escapes to sea, where he is entrusted by the Captain of the Slonsk to keep a diary-log of the ship's many voyages. On their very first voyage, Théo murders a woman aboard who toys with his and other's affections, and begins a long life aboard the ship lived mainly in fevers and forgetfulness. He awakens just long enough for the mad captain to tell him of the existence of his goddess-like daughter, Upanisha, of whom he catches a glimpse in his feverish sleep. Hellens seems almost unable to sustain or, perhaps, explain the surreal circumstances of Théo's love-hate relationship with Upanisha; but suffice it to say that this strange portion of the novel ends in his destroying the woman and the boat. He is saved; how we are never told.

Returning home to his mother, he is suddenly forced to face a new rival in the previously unreported step-brother Victor, who is attempting to sell the lovely house and grounds in order to create a factory that will make him his fortune. The brothers, innately hating one another, are further embittered as Victor's intended bride, the mayor's daughter Amanda, increasingly falls in love with and outwardly flirts with the older Théo. But when the mother dies, in part because of an argument with Victor, Théo simply packs his bag and leaves. Just as he mystified Upanisha's murder and the destruction of the boat at sea, so Hellens turns to fable at novel's end, as Théo trudges off into the snow, never to be seen again.

It is difficult to know what to make of a novel in which the major events of the book are clouded over, and other actions, such as they are, are presented "off-stage" or in brief glimpses. Yet the psychological portrait Hellens paints of his anti-hero is a strong one, at times extremely moving and touching and at other times enormously frightening and unsettling. And that alone is worth reading this most unusual work.

Posted by greenintegerblog at 8:39 AM