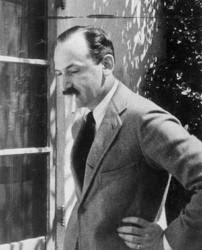 LOOKING FOR LOVE
by Douglas Messerli

Preparing to teach an MFA course on American Satires at the Otis College of Art + Design in the Fall, I recently reread Nathanael West's Miss Lonelyhearts (1933).

I had remembered better than I thought I might. I had correctly recalled from a youthful reading that the major character, a male newspaper writer assigned the job of answering letters from the love-stricken and forlorn, becomes increasingly forlorn himself and ultimately becomes depressed as he attempts to honestly answer these anonymous epistles of distress. Moreover, I had remembered the spiritual demise of the "hero," as he becomes more and more entrapped in the cynical lies of his own world—a world partly of his own making, pointed up by the very fact that the feature editor, Shrike, Miss Lonelyhearts' boss, has assigned the job as a joke. In short if the newspaper's advice to a suffering public cannot be taken seriously, what can be said of its reporting of city and world events; are their reports also jokes? And if so, where does any notion of reality begin. It is no wonder that Miss Lonelyhearts falls deeper and deeper into despair until in a feverish vision he rushes out of his room into the arms of death in the form of a vengeful husband of a woman with whom our "hero" has (somewhat unwillingly) had sex.

But this time around, I also saw what I perceive as a somewhat deeper structure to the book. I kept thinking, as I moved forward in the plot, of a popular song (not one of my favorites) made famous by country western singer Johnny Lee. One phrase will suffice to remind the reader of the piece: "I was looking for love in all the wrong places / looking for love in too many faces." For that is just what Miss Lonelyhearts does throughout West's masterwork. It is almost as if the moment he has become assigned the job of responding to his audience's tales of heartbreak, that he himself begins to seek out love, while brutally rejecting it, failing just as miserably as do his readers.

His first vague encounter with the possibility of "love" is with the all-male gathering of fellow workers and friends at Delehanty's speakeasy after work, where Shrike and others mock his job:

Miss Lonelyhearts, my friend, I advise you to give your
readers stones. When they ask for bread don't give them
crackers as does the Church, and don't, like the State, tell
them to eat cake. Explain that man cannot live by bread
alone and give them stones.

Despite his superior's cynical advice and the writer's attempt to laugh at himself, Miss Lonelyhearts realizes: "He had given his readers many stones; so many, in fact, that he had only one left—the stone in his gut."

Still, he sits down with these men, attempting, if nothing else, to engage them in conversation, to participate in a kind of male camaraderie at the very least. Soon, as these men become drunker and drunker, they spill out onto the streets where they buy a lamb to sacrifice. The men only half-kill the poor beast and Miss Lonelyhearts, after begging them to put the lamb out of its misery, is forced to go back and crush its head with a stone. Almost immediately in this work, West reveals the violence behind almost all actions in this society, and the inability of more caring individuals, which Miss Lonelyhearts would like to be, to prevent it.

His second encounter is with Betty, his girlfriend, who it is clear is not at all suitable for the writer. As he describes her, she is "Betty the Buddha," a unmoved woman, smilingly and smugly judging his every act. What begins as an attempt to find some rapport, ends, once more, in a kind of violence, abusive language, followed by tears and the order for him to leave.

The next adventure in this "Looking for Love" tale is even more brutal as, once more with his speakeasy friends, he encounters an older homosexual man waiting in a public bathroom. The group entices the man to join them. After toying with him for awhile, joking about the psychologists Havelock Ellis and Krafft-Ebing, the men begin to get ugly, particularly Miss Lonelyhearts. As the man begins to sob, Miss Lonelyhearts falls upon him: "He was twisting the arm of all the sick and miserable, broken and betrayed, inarticulate and impotent. He was twisting the arm of the Desperate, Broken-hearted, Sick-of-it-all, Disillusioned-with-tubercular-husband." As the old man screams, someone hits Miss Lonelyhearts over the head with a chair.
It is not unusual, I should mention, for highly-closeted individuals such as Miss Lonelyhearts seems to be, to turn their frustrations and violence upon those who are more sexually open.

His next stop, a swing to the opposite sex, is to visit his arch-enemy's wife. Mary Shrike, hating her husband, is only too happy to accommodate him; but the sex is empty, and leaves him even more lonely: "Like a dead man, only friction could make him warm or violence make him mobile." Later Mary invites him back to the house, and he agrees to return, finding a diffident Shrike at home. The two, Mary and Miss Lonelyhearts go out on the town, but when they return she no longer will let him kiss her, and they are greeted at the door with Shrike in only his pajama top.

Within this dizzying spiral of failed love is Miss Lonelyhearts' meeting with one of his readers, Fay Doyle, a woman who literally entraps him and forces her love upon him.

A field trip and even a short stay in the country with Betty does not cure him. Upon his return, he meets with Fay Doyle's crippled husband, who—in the very language of Miss Lonelyhearts' letter-writing sufferers—pleads with him to help him regain some self respect, follows. That outcry finally begins to awaken something in the failed would-be lover; the newspaperman finally finds someone with who he can share his love:

...Doyle's damp hand accidentally touched his under the table. He jerked
it away, but then drove his hand back and forced it to clasp the cripple's.
After finishing the letter, he did not let go, but pressed it firmly with all
the love he could manage. At first the cripple covered his embarrassment
by disguising the meaning of the clasp with a handshake, but he soon gave
in to it and they sat silent, hand in hand.

It is only after this homoerotic experience that Miss Lonelyhearts is prepared to give in to the easy "normality" that stands as a false image of true love. He agrees to marry Betty, attended with all the legalistic decision-making of any new partnership: she agrees to have a child, he agrees to see a friend about a job. "...They decided to have three beds in their bedroom. Twin beds for sleep, very prim and puritanical, and between them a love bed, an ornate double bed with cupids, nymphs and Pans." It is clear that love will be more a symbol in that household than an everyday reality.

Once he has settled for this image of normality, however, a fever rises in him like a furnace to reveal what no one in this fiction has previously seemed to comprehend: the spiritual force (he names it as Christ) he has been searching for is life and light! His search for love has always been undertaken in confusion and the dark, never openness and honesty. In something close to a recognition of a new sexuality, Miss Lonelyhearts (who in an earlier draft was named, but in the final version is described only his female moniker) is prepared to rush down the stairs and embrace Doyle, who has just rung the bell.

God had sent him so that Miss Lonelyhearts could perform a miracle
and be certain of his conversion. It was a sign. He would embrace the
cripple and the cripple would be made whole again, even as he, a spiritual
cripple, had been made whole.
He rushed down the stairs to meet Doyle with his arms spread for the
miracle.

Confused and frightened by the rushing man, Doyle attempts to escape, but in their fall, accidentally it appears, shoots him with a gun he has wrapped within a newspaper. The false, the dark hypocrisy of that newsprint world of lies, wins yet again, destroying, evidently, any chance of life and light. And so ends West's brutal satire of love.

Posted by greenintegerblog at 9:41 AM