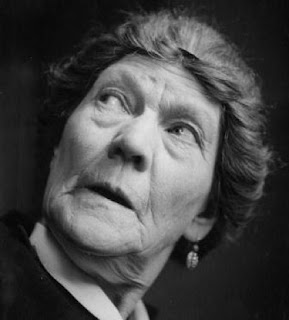 THE MAN WHO WOULD NOT DIE
by Douglas Messerli

Ivy Compton-Burnett Manservant and Maidservant (published in the US as Bullivant and the Lambs) New York: Alfred A. Knopf, 1948; reprinted New York: New York Review of Books, 2001)

It may sound by my title as if I am calling up shades of the Russian monk Rasputin to describe events in Ivy Compton-Burnett's masterful dialogue fiction. Horace Lamb, the dictatorial and peevish husband and father at the center of her fiction certainly outlives all manner of possible murders. Although none of the family and servants actually plot or enact Horace's brushes with death, they certainly all harbor some reticent desire for his demise.

The fiction begins with the rather tyrannical father arguing with his cousin Mortimer or whether or not the fire is smoking. Mortimer's suggestion that the fire "appears" to be smoking outrages Horace, who cannot tolerate nor think of abstractions. For him, everything is concrete, "black or white," "yes or no"; and that problem is at the heart of his difficulties with others, who dream and plot, wish, scheme, or just desire!

That first morning already hints of his own wife's exasperation with her husband. Called away to her ill mother, she is only too happy, it appears, to escape Horace's temper. What we don't yet know, but soon discover is that she plans to leave Horace and marry Mortimer, hoping that the children may join them.

That is the first of the dark events that permeate Compton-Burnett's fiction, and build up a web of near melodramatic incidents that often seem at odds with the intelligent and witty commentary through which the story is told. Of the British dialogue fiction writers (Elizabeth Bowen, Ronald Firbank, Anthony Powell, Henry Green, and Evelyn Waugh among them) Compton-Burnett is the purest in the sense that almost all of her tale is told through conversation rather than description. And since almost all of her figures—except perhaps for lowly servants George and Miriam—speak so literately, it is hard to imagine them playing in what at times appears almost to be a Victorian gothic romance.

Certainly there are no ghosts in the Lamb house, just the personal secrets and frailties of the entire family. While Horace is obviously the most flawed, and the least likeable figure, he perceives himself to be the most rational being in the house. Once he has gotten wind of his wife's intentions, he begins also to see himself as a kind of tortured man, betrayed, a bit like Lear, by his family members.

Rather than railing against events, however, Horace determines to change his relationship with his children, which he achieves, bringing them from open fear and opposition into a more-loving family circle wherein he reads to them, embraces them, and opens himself to their expressions in a way he had not previously done. Despite her intentions, his wife, Charlotte, does return, and discovering the changes in family life, realizes she cannot now leave without losing her children.

Mortimer perceives that his relationship with her cannot persist, particularly since she is more in love with her children than with him. While accepting Charlotte, Horace sends Mortimer away, hoping he will marry a local girl and live in the mill house. But Mortimer breaks with the girl when he discovers that it she who has read Charlotte's letter to him and revealed the truth to Horace. With a small allowance from Horace (who controls what is his wife's money) Mortimer leaves the Lamb house, staying in a rented room in another town.

While neither Mortimer nor Charlotte have sought Horace's death, they were certainly ready to spiritually and emotional destroy him through their acts. And from these events Horace gives rise to new suspicions he might have previously been unable to imagine. At times his fears grow into a kind of paranoia.

Nonetheless, Horace is secretly pleased when Mortimer unexpectedly returns to the house, having missed their conversations.

Hardly has family life returned to normal, however, before Horace, trying to sort out events, takes a walk in the direction of a bridge which most of the family members know to be ready to collapse, but have failed to notify Horace. His two sons, Marcus and Jasper, watch him as he passes, and soon recognize that he is on the way to the bridge. At first they think about warning him, but realizing it is probably too late, ponder what his death might mean to them and the family. Within a few moments, however, they are penitent for their thoughts and come running into the house with tears and cries of their fears.

People are called forth to check on Horace, as the family waits in horror. But Horace returns unscathed, a recently placed sign having warned him away from crossing. When he hears the series of events, however, he is shocked by what he quickly perceives was his sons' momentary desire for his death. His reaction, as of old, is extreme. He seems to threaten no possibility of communication or even, in their minds, expulsion from the family.

While Mortimer and Charlotte argue for their innocence and his patience, Horace grows angrier and angrier:

So I am placed like this. My children desire my death. That is their feeling for their
father. I have escaped from it to find it is what is wished for me. And I can honestly
say that I have never wished it for anyone else. I have never grudged anyone the
right to live.

This from a man who has seldom allowed others to be what they might.

We are afraid of you. You know we are...Your being different for a little while has
not altered all that went before. Nothing can alter it. You did not let us have
anything; you would not let us be ourselves. If it had not been for Mother, we would
rather have been dead. It was feeling like that so often, that made us think dying an
ordinary thing. We had often wished to die ourselves.

A third "attempt" on Horace's life occurs when the young servant George, ill-treated by the head butler, Bullivant, and virtually ignored by the family, is discovered stealing treats from the cupboard which he plans to award to his friends. Called into a conversation with Horace, the boy refuses to attend, claiming his day off. What he plans to do is to kill himself by leaping upon the bridge, leaving Horace to suffer the consequences of guilt.

George cannot bring it off, but instead removes the "Danger" sign. Again Horace approaches the bridge, wondering if it might now be repaired, before discovering the sign a ways off along with a knife that he has given his soon.

Accusations again resound throughout the Lamb home, only to be cleared when neighbors report having seen George with the knife a few hours earlier in the town general store. George, who has returned to the house, is upbraided—although in kinder terms than Horace might have accomplished—by Bullivant.

Pneumonia, a far more dangerous opponent, takes over Horace's body, and, as the family quietly suffers in silence, his end seems to be near. The wonder of Compton-Burnett's tale is that as Horace finally encounters a real threat to his life rather than the imaginary ones he has battled throughout the story, family members and servants grow more and more contrite, expressing their need for and love of their tyrannous father, who has been just if not wise in his behavior. And experiencing the weakness of his own body somehow changes Horace as well, as if he begins to perceive the human frailty in himself, not simply in others.

Horace's miraculous resurrection is also a family reconstruction, each of them returning to their proper roles. Marcus and Jasper, along with Avery, Sarah, and Tamisin, can return to being children. Aunt Emilia, Charlotte, and Mortimer again become the core of love in this cold house. Bullivant, Cook, George and Miriam remain in loyal service to the whole. Horace, for all of his weaknesses and blunders, has once again survived.

Posted by greenintegerblog at 10:35 AM