Douglas Messerli | Nothing Left Behind (on Laforet's Nada) 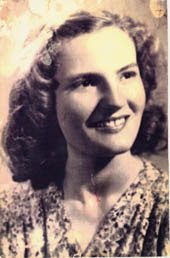 NOTHING LEFT BEHIND
by Douglas Messerli

Spanish novelist Carmen Laforet’s 1945 novel Nada begins with the arrival in Barcelona of a young and excited teenager, Andrea, who has come from the country to study in college. She remembers her grandmother, aunts, and uncles and their large apartment on Calle de Aribau with fondness; but the place now consists of only half the space of the old days, much of the furniture missing, a sense of chaos hovering over the whole. Her formerly loving aunt Angustias and her brothers Juan and Román appear cold and forbidding, her grandmother a somewhat confused and totally displaced woman unable to keep her family from their daily squabbles and formidable battles. In short, Andrea has encountered the effects of the Spanish Civil War—and, in particular, the brutality of that war upon the middle class of Barcelona.

She arrives late—the train has been delayed—and as she is gently scolded by her aunt, the impressionable young girl immediately suspects something is amiss; the darkness of the rooms, the jumbles of clothing upon the floor, the suffocating heat of the apartment all create a sense of a nightmare world. But she is tired and anxious about her new life, excited for the possibilities that face her in this new world, and cannot sort out the various contradictions she faces.

After only a few days of her stay she feels completely restricted by the poverty-stricken religiosity of her guardian, the dark and dour Angustias. Indeed, Angustias is one of the most remarkable figures of literature, a character of startling contradictions: on the one hand, she is a beautiful and intelligent woman keeping some semblance of order among her violent-tempered brothers, warning her niece of the moral and social dangers she might encounter in the city; contradictorily, she is a bitter and petty woman unable to partake of most of life’s joys, a woman who, when she temporarily leaves her family for a few days to follow her former lover, now a priest, is outraged by Andrea’s usurpation of her bed. As Andrea correctly perceives, although Angustias is monstrous, she is, “in her way, …an upright, good person among those crazy people [her uncles and Juan’s wife Gloria]. A more complete and vigorous person than the others….” Angustias, however, sees Andrea’s innocence and wonderment of life as rebelliousness, proclaiming that “If I’d gotten hold of you when you were younger, I’d have beaten you to death.” In such a sado-masochistic world, all growth, knowledge, and understanding is impossible; life becomes absurd, is incomprehensible. In that sense, the author has no choice, if she is to continue the story of Andrea’s coming of age, but to get rid of such a menacing figure, which she does by sending Angustias off to a convent, allowing Andrea to move about the city as any young girl might.

The figures remaining, however, are perhaps even more frightening in their secrets, in the power they hold over one another, and in their moral decay. Gloria, Juan’s wife, is presented as a common woman, almost a sexual slut, clearly a woman unworthy of the family’s former social status. Yet it is also clear that she and her husband Juan are incredibly in love, and that he, in turn, is a loving and protective father to their young son. The more mysterious brother, Román, insists that he “owns” Juan, and it is clear even to Andrea that he is able, through even the slightest of statements, to provoke his brother to violence against Gloria and others.

Part of that provocation is clearly based on the sexual prowess of the elder brother, and the possibility that he has sexually molested Gloria or, even worse, that she desires to continue the relationship. Andrea gradually perceives, however, deeper causes in their rift, issues dating back to their youth when Román was perceived as the more gifted child, spoiled by their mother as a talented and beloved son, whose very existence seemingly points to Juan’s failures.

In fact, both men are incapacitated children, unable to live out their adult lives as supportive figures because of the infantilism of the society at large. We discover, with Andrea, that it is only Gloria’s nighttime escapes into her sister’s house and gambling den which keeps this family from complete starvation. Her small winnings at gambling and her nefarious sales of their furniture are the major sources of family income.

Andrea receives a small monthly stipend, some of which she gives up to the family, but she is equally irresponsible with money, purchasing each month expensive flowers and candies for her friend Ena’s mother, and forced to go hungry throughout the rest of month. Ena, who comes from a wealthy and successful family, is the only one, indeed, that Andrea can turn to for a vision of plentitude and joy. In her maturity, beauty, and breadth of understanding, her friend stands out as the only figure in the fiction who Andrea might wish to emulate. Andrea joins Ena and her boyfriend Jaime in a kind of innocent threesome, reminiscent in some ways of a feminine version of Jules and Jim, as they frolic weekends on the vacation beaches of Spain.

There is something dark and mysterious, however, about Ena as well, and after meeting Andrea’s uncle Román, she cuts off her relationships with both Andrea and Jaime, casting the two into a world of puzzlement and loneliness. Has her uncle in fact had sexual relationships with Ena as well? What is his power over other people? As Andrea begins to explore the bohemian artistic circles of the city, she comes to discern the interrelatedness of events in her life and in Barcelona as a whole. A poet friend has seen a beautiful woman at a bar, with whom he immediately falls in love, a girl who, it turns out, is Ena, whom the boy and Andrea together encounter on the street. But when Andrea attempts to communicate with her about Jaime, Ena maintains her vague distance.

It is only the revelation by Ena’s mother that as a young girl she attended school with Andrea’s uncle, and later had a painful affair with him, that clarifies the situation. Ena has attempted through her own encounters with Román to understand her mother’s passionate affair of early life. Following the mother’s pleas, Andrea attempts to stop the relationship between Ena and her uncle. Her success ends, a few days later, with Román’s suicide, a death which suggests he may finally have come to terms with his own evil manipulation of others, but which also may indicate how those machinations have kept him in a world apart from others. Now there is nothing left of the operatic family scenes; only an uneducated woman and her jealous husband—a couple and a child like millions of other poor families throughout Spain—remain.

Andrea’s final escape from this formerly malevolent world—a world we are forced to perceive time and again reflects the fascist values of the country at large—represents, unfortunately, a kind of deus ex machina, as Ena and her family offer Andrea a job and a place to stay in their new home in Madrid. Nonetheless, the offer comes as a relief for the reader swept up by the hopes and dreams of this young heroine. Just as she arrived in Barcelona, she leaves, with a similar “expectation, the longing for life,” as a long black car awaits her, where Ena’s father extends his hands in “cordial welcome.”

Posted by greenintegerblog at 9:13 AM