Douglas Messerli | "Out of Order" (on Stein's The Autobiography of Alice B.Toklas) 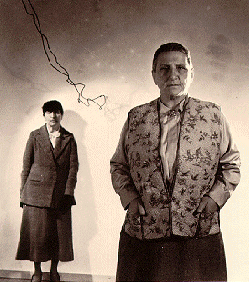 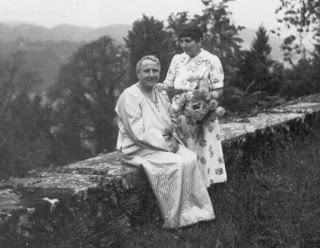 OUT OF ORDER
by Douglas Messerli

Among the most devoted of Stein’s readers, particularly those who recognize the greatness of difficult texts such as The Making of Americans, How to Write, and Stanzas in Meditation, there is the notion that Stein’s more popular works, particularly The Autobiography of Alice B. Toklas and Everybody’s Autobiography are lesser writings, what Stein scholar Edward M. Burns describes as her accessible “audience” writing as opposed to her “real” or experimental pieces.

There is no question that The Autobiography is seemingly accessible; and Stein herself claims to have written the book in just sixty days, writing for only a few hours each day. Certainly Stein’s brother Leo found the book to demonstrate no writing talent, describing its many admirers as “fatuous idiots who go to hear her silly twaddle.” And, indeed, the very popularity of this work cannot help by chafe those of us who equally enjoy or even prefer her many “unpopular” works. Without a doubt, The Autobiography is a far less complex work that any of the three I have named above. Yet, I think too much has commentary has been devoted to its normalcy rather than its various experimental aspects.

Part of the “problem,” if you can describe it seeming simplicity as a problem, is that Stein goes out of her way to normalize the structures of this work, pretending it is an “autobiography” organized in a chronological manner. But, of course, it is not a “true” autobiography, but rather a pretended one, Stein performing as the voice of her companion Alice B. Toklas, as Stein admits in the work’s last paragraph. The natural question that arises, accordingly, is what genre does this work belong to? Is it a kind of fiction posing as autobiography, or simply a kind autobiography—Stein’s autobiography—written through the voice of another being. Carl Van Vechten, in his introduction to the book, insists that The Autobiography “is written in imitation of Miss Toklas’s own manner,” the fact of which I am willing to believe. But the imitation of another’s voice does not necessarily mean that the work expresses the other’s ideas or even memories. Although Stein often goes out of her way to separate her views from those of Toklas’s—consider, for example, their friendship with Hemingway, a man who Toklas clearly cannot abide, while Stein is always able to forgive because he has been such apt pupil—it is also clear that the vast majority of the work’s observations about friends and Stein herself are the viewpoints of the real author, not Toklas. One has to wonder, for example, whether Toklas would have so emphatically declared Stein as a genius had she herself written the text. Clearly there was a great deal of love between the women, and Stein goes out of her way to celebrate Toklas’s abilities and contributions to their life together. Yet, as most married couples know, it is often harder to perceive the brilliance of someone with whom one lives than of strangers. It is a bit like patting oneself on the back for having been so capable to have chosen a genius as a life-time companion.

So, although we can easily perceive that there is a great deal of autobiographical material in this book, we cannot as readily determine whose autobiography it truly is. And that inevitably threatens the authenticity of the narrative we are reading. One’s own memory cannot ever be that of another. Perhaps Toklas would have remembered these events, moreover, in an entirely different manner. Most certainly she might have recalled entirely different events, people, and places upon which to focus. So in a real sense, this book is neither Toklas’s nor Stein’s autobiography, but something in between, perhaps, a kind of fictionalized autobiography of their life together.

Stein further normalizes the work by describing events as if they were chronologically presented. “Before I Came to Paris” presumably describes the time before Toklas arrives and enters the Stein household, covering events of her own and Stein’s life before their time together; the “Arrival in Paris,” suggests that the chapter covers Toklas’s coming to Paris and meeting Gertrude Stein, etc. Yet even in these first two chapters, we recognize that the there is something askewed about the focus of these sections. Although the work begins with the quite typical statement “I was born in San Francisco, California,” by the fifth paragraph of the first chapter, Stein as Toklas is already describing how Stein has described Toklas in “Ada” in Geography and Plays, a work published in 1922, fifteen years after these women met. And although the chapter covers the time “Before I Came to Paris,” by the last paragraph Toklas has already met Stein, been shown her paintings, and told stories of Stein’s life in Paris. If she is not actually in Paris yet, she has already, by the work’s ninth paragraph, been intimately involved with Stein.

By the second chapter, purportedly devoted to Toklas’s “arrival in Paris,” everything is quite centered on Stein’s publishing activities, and by the second paragraph the narrative has jumped ahead to describe the atelier of 1914. In short, as any reader quickly recognizes, the chronology is not one of focused upon the passage of time, one year followed by another, but by the associations of memory. And that memory is not Toklas’s.

Stein, moreover, fills her / Toklas’s work with what appear to be descriptions of hundreds of individuals and events, the very stuff of which autobiographies are necessarily filled. There is little doubt that The Autobiography consists of a great many fascinating observations—generally Stein’s—about the amazing figures its mentions, including Pablo Picasso and his various wives, Juan Gris, Henri Matisse, Paul Cézanne, Mildred Aldrich, Guillaume Apollinaire, and hundreds of others. It is these observations, in fact, which appears to make this book such a appealing work, as if we, the reader, were able to listen in to Stein’s and Toklas’s many fascinating evenings at 27 rue de Fleurus. In fact, however, as my students and I both observed in a recent rereading of this text, the reader is likely to discern these characters as quite “flat.” Although we certainly do know—as we are told time and again—Stein and Picasso, for example, were very good friends, but we get very little of Picasso’s observations or evidence of his and Stein’s conversations. It is almost as if Stein, a writer who must remember is not interested in psychological presentation, were to describe her friends by their calling cards (a device actually used in Norman Douglas’s great fiction South Wind). Although we may glimpse the hats and earrings of Fernande Picasso, we are told little about her or her husband. The dazzling presentations of these historical figures are expressed in tiny fragments that cannot but disappoint one used to normative autobiographical writing.

Combined with the radical disjunction of events I have mentioned above—in several chapters, for example, the text returns to Alice’s arrival in Paris when she begins to type up Three Lives—we soon discover that even though Stein purports to be writing an autobiography of Toklas, she is, in fact, spending far more time on the reactions she has to others than in presenting the events of her own, of Alice’s, or even “everybody else’s” lives. Although The Autobiography is never as linguistically radical as her “portraits,” it is more related to that genre than it is to standard autobiographical or even biographical writing.

At several points, moreover, Stein-Toklas gets so ahead or behind the narrative that we are told information about events which she never reaches. At other times, we are told that the narrator will later describe events which seem to be forgotten. And at one point, the narrator even breaches the walls of the text itself, reaching out to a kind of future reality which could not possibly exist in the process of the writing itself. Describing Alice’s reaction to her portrait called “Ada,” the narrator writes (on pages 94-95 of my text):

I can still see the little tiny pages of the note-book written
forward and back. It was the portrait called Ada, the first
of Geography and Plays. I began it and I thought she was
making fun of me and I protested, she says I protest now
about my autobiography. Finally I read it all and was terribly
pleased with it. And then we ate our supper.

In the space of a single paragraph, the narrative has moved from the time of Stein’s writing of A Long Gay Book, a work written in 1911-12 and published in 1933, back to a work written in 1910 and published in 1922, a moment later shifting beyond the frame of the work describing these events, to a time of Toklas’s protests against the book itself and back to the dinner table when Toklas first read “Ada.” One presumes that it is impossible to protest something that has not yet come into being and had not even been dreamed about when the events being described are taking place. Here, not only does the narration appear “out of order,” but Toklas’s protests against what has not yet been conceived, generate a kind of confusion that brings the entire work into doubt. One can almost hear Toklas’s voice crying out, in the midst of her typing up of this manuscript, “out of order, Gertrude, this is preposterous!” Yet it is precisely such a maneuver which makes this work—intentionally or not—one of Stein’s most postmodern and yet personal texts.

For in many respects, The Autobiography of Alice B. Toklas is not at all a work of autobiographical writing or even a fiction about an autobiographical work, but a text about how a writer lives and survives. For me, some of the most moving moments in this work are not those about the now-legendary figures with whom Alice and Gertrude dined, but Stein’s desperate need to be read and loved—the forces that, in fact, led her to pen this composition. As Stein herself puts it, one may be writing for strangers, but one must also be able to have books that those strangers might read. What Stein purports Aaron Copeland to have said to the young Paul Bowles—“if you do not work now when you are twenty when you are thirty, nobody will love you”—reveals as much about the narrator, it seems to me, as about the composer or the young author to whom it was said. And the touching image of Stein passing the French-American bookstore time and again just to glimpse the book Alice published in her Plain Editions, Lucy Church Amiably, in the store window, tells me more about the author and her companion than any remembered conversation between Toklas, Stein, and anybody else.

Posted by Douglas Messerli at 10:16 AM