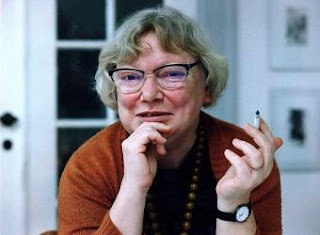 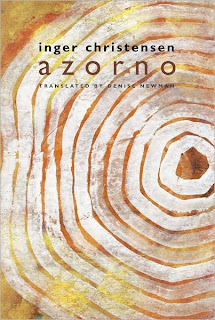 As are most of her writings, Inger Christensen's 1967 fiction Azorno, is a highly structured work. In this case, seven characters—Randi, Katarina, Louise, Xenia, Bathsheba (Bet), Sampel and Azorno—each of the women pregnant, are in the process of writing fictions. Each of their narratives—although one who be hard placed to describe any of them as having a plot—contains similar actions, phrases, and events.

Various of these figures write on pages topped by the address Rome, Via Napoli 3 and the telephone number 484.409-471.565. Several of the characters travel through Alpine passes: Oberalppass 2044, Passo S. Gottardo 21009, Disentis / Mustér 1133, Passo del Lucomagno 1917, and Biasca 2931 before approaching via Lugano 334 "in the hot, crisp, spicy landscape around the border at Chiasso and Como 201," singing with the car window open. Other figures wake each morning to watch the person across the way dress before going to a small cafe where, to free the locals from seeming to be observed, they stare at a rag, a sandstone sculpture, and a little greenish manikin. Or they go out at other times, sitting in the Piazza della Repubblica, without a hat or gloves, observing the man (or woman) across the way. They return to write on the papers headed with their name and address kept, while they are traveling, in at the bottom of a suitcase full of "a multicolored heap of extra bras, girdles, panties, stockings, sandals, scarves, gloves, creams, cosmetics, and a white hat, all rolled up in a glossy transparent plastic tube with a handle made of twisted gold thread.

Several of the women of this fiction write one another, perceived by other figures as liars or exaggerators of the truth. Bet Sampel, Sampel's wife, at one point invites all the other women to join her in the lake house, whereupon they discover that each of them is pregnant and, together, upon the arrival of Sampel, proceed to claw him to death. The dog in that house is called Goethe. A small fountain that does not imitate the sound of rain sits on a terrace.

At other times, several figures gain comfort from staring at a picture which they call "the composer," who seems to be staring at a small cigarette burn or a black dot. Some of the women go to Tivoli in Copenhagen or other parks where they order two Dubonnets, and/or two martinis, quickly drinking them and paying, after pulling the table close to them. Most of these figures speak of two ways of destroying life: with poison or freedom:

Both equally gently. Every confinement can terminated from
within: e.g., by giving the tree poison and quickly paralyzing the
tissues in their multiple functions. When everything stands still
this way, a mute block, all movement begins to go downward:
flowers disintegrate, leaves curl up, rustle, are carried away, twigs
on branches dry up, break, and the trunk cracks, caves in.
Slowly consumed by everything. Or the confinement can end
from without: e.g., by giving the tree freedom, an excess of space,
light, air, water, nourishment, by which it's made to unfold in a
series of ecstatic flowerings, abruptly followed by exhaustion,
withering. At last the tree dries up, a mute block that is slowly con-
sumed by itself. By everything.

In many respects one might say that the two methods of death described above are at the center of this "story." In several instances the women seem trapped, metaphorically poisoned by the relationships or lack of relationships they must suffer; one sits in a dark room where outside it perpetually rains. Another is locked away in an institution. Another is trapped in Sampel's bedroom at the beautiful lake house. Others move, like Beckettian figures, "in" and "out" in seeming freedom, but with no where to go, wander the streets, sit at tables to drink, or cross the various Alpine passes by car.

We soon realize that these figures are all, in some way, creations of the artist Azorno, who, when he sits at Via Napoli 3 to write, admits of using the pseudonym Sampel. In their imagination, in the possibilities of telling the various sets of possible scenarios, each is indeed made pregnant by the author, and each rearranges these series of events, like the ever-recurring image of a bouquet of various-colored tulips that is described in many scenes.

Christensen asks again, but in a highly original manner, what is reality, who of us is real? Several of her figures often have the feeling that somewhere there is a person who exactly at the present makes the same notes to be woven into a novel about him or herself.

It is only in the final section of this lyrical work that we sense we may have broken through to a seeming "reality." In that section, Azorno and Bathsheba are in Paris (not Rome) where he is writing and she, accompanying him, shops and walks the streets. Here too are many of the elements we have seen at work throughout the book: he loves listing the roses from his garden as if even saying it were a charm. The suitcase is packed with the several tablets and toiletries as described elsewhere. Just as another character cuts through a withered plant to reach its thorns, Azorno destroys such a plant in the Luxembourg Gardens. Yet here Goethe, the dog, has been transformed into a small porcelain figure set atop the wardrobe in their room. And while Azorno attempts to write his story, Bathsheba (no longer called Bet) ponders, since she has been told she will be his novel, whether she should consider herself as "simply a human being" or "as a human-made being." As elsewhere in the book, she carries an umbrella, meets a man (Azorno), and joins him at a table she draws close to herself as she orders two Dubonnets.

Yet this time, she has challenges her husband, who claims to have a vision of her, to tell her what she is wearing. As at another scene in the fiction, he responds that she wearing a white coat, white hat, and white gloves, and when the wind blows the coat open, underneath is a large-flowered dress. In fact, when she opens her coat she is wearing "an orange sleeveless dress made of a thin fabric that hung loosely on her and moved with every little puff of wind," something outside of the repeated elements of the work. In short, we now understand that she is an image to him, not a reality. She, as all people are in a world in which we create realities for them, is "a human-made being."

Christensen does not leave the story there, but finally takes it into a possible reality, as Bathsheba announces she is going to have a baby. The couple put their arms around each other and kiss, yet, as the author describes the event, it is still a symbolic act: "It was a question of gentleness."

At that same moment, however, Azorno seems to suddenly come alive, realizing for the first time that the woman "With the dark orange dress against her dark skin against the dark evening" is something separate from himself, that the mass of people around him are not the same as his creations, that he is living not a life, but his life, his only life. He realizes that he is "A person. Maybe more. Who just now thought exactly this." The revelation changes everything as the author, mimetically, becomes one of us, living human flesh:

When the gardens were about to close and the water jets
sank down so that the water's surface became calm, there was
a moment of soundlessness, everything was silent, though certainly
never completely silent, since there was the sound of many
people's movements quickly increasing, as the sound of all that
I have written was quickly increasing and limiting my freedom to
experience, but it was in this moment of soundlessness that we got
up, and the whole time I heard Bathsheba breathing, and I kissed
her, it was in that moment that we kissed each other, that for the
first time in our lives we experienced the mild even air. And sang.

And with that song the "pictures resembling creatures," of which Søren Kierkegaard writes in Christensen's epilogue, are transformed into the creatures themselves.

The death of Inger Christensen in January of this year has left us without one of our greatest celebrants of living and life.

Posted by greenintegerblog at 9:33 AM