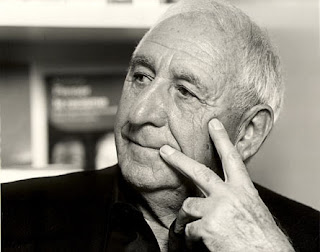 RETURNING TO THE CLOSET
by Douglas Messerli

I published—or more correctly, I republished—two books by Ray, The Twofold Vibration in 2000, a fiction first published in 1982 by Indiana University Press, and, six years earlier on Sun & Moon, Smiles of Washington Square, first published by Thunder's Mouth Press in 1985.

I seem to have known Ray (who preferred to be called Raymond, but who I knew as Ray) forever. Long before I met him, I had read his criticism, Surfiction: Fiction Now and Tomorrow, and referred to it extensively in my PhD dissertation of 1979. Ray seemed to me one of the few critics of the time who had attempted to do what I myself was trying to accomplish, to define the differences between modernist and non-modernist (narrowly referred as postmodern) fiction. Like Ray, I saw its roots from the beginning of the 20th century, from Gertrude Stein on, and I wanted to create a kind of handbook which would help people see its different approaches to voice, character, place, theme, and, most of all, form.

I think I must have first met him in the flesh—and the words "in the flesh" are important when describing Ray because he so very much larger than life—in the early 1980s, when I began distributing Fiction Collective and other small presses along with my own Sun & Moon Press. I had found a small band of independent sales representatives to sell these and my own books across the country, and each season I would meet with them, describing the new titles, in New York.

Ray, whose important fiction Take It or Leave It was published by the Fiction Collective, was a member of that group, and he and others wanted to meet with my representatives to sell their own titles. The art of describing new works to sales people who have hundreds of books to represent each season is a difficult one, which I felt I had mastered. Accordingly, I tried to dissuade the Fiction Collective authors from coming to speak with my representatives, but they were insistent. Ray, along with Russell Banks and Jonathan Baumbach (yes, the father of Noah Baumbach played by Jeff Daniels in the film The Squid and the Whale)—all sublime egoists, each capable of dominating any conversation—showed up late to the meeting and took so much time describing their three new titles that my reps insisted that they would never see them again! I was, accordingly, put in the difficult position of scolding the three, but two of them, at least, Ray and Russell remained lifetime friends.

That is not to say that I wasn't a bit taken back by Ray's dynamic personality. Indeed, in his unpredictable enthusiasms, directed mostly toward his own writing projects and, later, his understandable delight with the French and German attention to his writing, along with his winking sexual innuendos about women, sometimes irritated me and even, on occasion, scared me a little. I liked him enormously, but at occasionally he was not where you thought he was. As one of his own characters describes "the old man" in The Twofold Vibration (clearly a mirror image of the narrator, Federman):

yes, that's how our old man was, so unpredictable, so changeable,
and so careless with his own life, despondent one day, hopeful the
next, always more interested in the process than finalities....not an
easy man to deal with

And then there was his voice, with a French accent, of course, but seemingly also from another time and place. As French fiction writer Jean Frémon once told me, "When I met Raymond Federman I could not believe what I was hearing. It was a voice from another time. Only a small neighborhood in Paris spoke French that way, the way Maurice Chevalier had spoken and sung, and it has long disappeared. I asked him, my God, where did you get that accent? He told me his story, how as young boy he was hidden away from the Nazi's in a closet. And when he finally came out, that was the way he would remain the rest of his life, since by the end of the War he had escaped to the US, joining the Army."

Federman's family, his mother, father and, sisters were sent to Auschwitz, were they died.

When I visited SUNY-Buffalo several years later, on tour with fellow poet Rae Armantrout, we dined with Susan Howe, Charles Bernstein, and the Federmans, Ray and his wife Erica, at an very pleasant Italian restaurant. On our way home, after having left the Federmans and Susan, the two of us chuckled to ourselves about Ray's grandiose manner, I adding my reservations about the man. Charles quickly interrupted, "How else might you expect him to be, given the life he has led, his childhood, the condition of creating several new beings? He had no choice but to become a series of alternating voices."

I was embarrassed, and realized the truth of what Charles had said. To be fair, moroever, Ray has never denied the forcefulness and energy of his own being. In fact, he celebrates it, just as he celebrates a world in which all the action is placed on something in process without ever coming to fruition. He writes what he calls "pre-texts," texts that exist before any happening; and, in that respect, his work is about potentiality more than plotted events, the writing existing as a potential for changes not only in the future but the past.

Smiles on Washington Square, for example, is the story of a chance meeting between a poor, immigrant American Moinous (one of Federman's regular stand-ins for himself) and a New England born, slightly order sophisticate, Sucette (who shares some of Erica's qualities). The two meet, but say nothing, only smiling at one another. The rest of the tale is a series of possibilities for their future encounter(s) and relationship, all of which entail a great deal of patient waiting and outright frustration for Moinous. Their relationship, in this non-existent reality (which is, at its heart, what all fiction is about), is a touching, even romantic tale, as these two opposites gradually reveal themselves before the inevitable breakup.

This work is perhaps Federman's closest in tone to his friend Samuel Beckett. For here, the major character, like many of Beckett's tragic clowns, is an insecure, lonely, and despairing figure who bluffs his way through life. Like Federman, he has lived in the protective closet before sneaking out to enter—barefoot, armored only by an outsized overcoat—a world of excitement and danger, a tyrannical innocent ("A typical bull with his feet on the ground and his head in the clouds who struggles constantly to conquer vanity and indolence") in a world he can never completely comprehend.

In Federman's futurist fiction, The Twofold Vibration, his friends Moinous and Namredef (Federman spelled backwards) attempt to uncover what "the old man" has done to be sent to the space colonies along with other undesirables on the eve of the new Millennium. To Federman, the writer, they tell the story of their friendship and as much as they know about "the old man's life," but have no clue, in this comic Kafkaesque tale, what his criminal acts have consisted of.

Like Ray, "the old man" was been hidden in a closet, and to this part of his own story, he adds other tales, how he was later arrested and sent to the camps, escaping from his railway car at the stop to eat potatoes in another train car that had paused alongside them. More stories emerge, an brief involvement in radical politics, a short affair with a Jane Fonda-like movie star, and travels across the US and Europe, including a visit to a concentration camp, encompassing excesses and suffering, boisterous outbursts of philosophical thoughts and deep retreats into fear and doubt. His famed "Voice in the Closet" screed was to have been at the center of this work, but was rejected by Indiana University Press' editors.

Through it all, Federman is represented to his reading audience as outsized, a being at once affable and slightly embarrassing. Yet his friends—and that might include any sympathetic reader—can find nothing in his past so terrible that it might result in his being sent into outer space for what, most believe, is certain death.

The search for his unknown crime is played out almost like a mystery tale, but, as usual in Federman's works, no ending seems appropriate. As the thousands of soon-to-be expelled individuals are gathered in a large room, Moinous and Namredef are there to see their friend off. "The old man" appears reposed, even resigned, finally ready for his fate. One by one the names are called, the prisoners taken on board and their families sent off, until only "the old man" remains. The shuttle is about to be sent into space without him! What has happened? his colleagues wonder. "BUT WHAT ABOUT ME, WHAT ABOUT ME," the old man cries out, striking his chest with his hand. He has been put back into the closet a second time. The snake has swallowed its own tail; the past has become the future, a twofold vibration. The survivor without a clue how to survive is left to start his struggle all over again.

Now, finally, Ray has been removed from that closet, that coffin-like precursor of death, forever. He has joined the dead by giving up his voice. For us still here, still trapped in each of our personal closets, so to speak, we can only, like "the old man," become lonely and forlorn. We miss that larger than life wise fool so very desperately. And, gathering today, we need to speak of our great emptiness, to share it with others. As Ray himself wrote some time before his death, however, in the humorous and profound short essay, "Reflections on Ways to Improve Death":

The fact that Federman cannot say I am dead. The fact of being unable to speak
one's death is the supreme category which abolishes all the others. It is the ultimate
category, the category of the unspeakability of death. Whether one dies in bed, dies
in one's books, dies with one's boots on, dies on the vine, dies in harness, dies
prematurely or in one's sleep, dies in a gas chamber, dies while making love to
one's lover, when all is done and said, that is the category of death that has
reached total improvement because it can no longer be spoken.

Posted by greenintegerblog at 9:39 AM