Douglas Messerli | "Rickabone's Fault" (on Claus' Desire and The Swordfish) 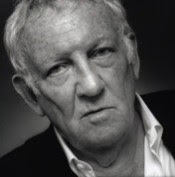 The noted Flemish writer Hugo Claus’s 1978 novel, Desire, begins in a small town Belgian gambling bar called The Unicorn. Its inhabitants, a rather seedy lot, include figures with monikers such as Felix the Cat, Verbist the Schoolmaster, Deaf Derek and Frans the Dutchman as well as more simply named (but perhaps more complexly presented) figures Jake, Markie, and Michel. The center of this down-and-out group, the traveling salesman Rickabone, is missing because of his death, and it is upon him that the group blames all the events of the story they tell.

For the first part of the novel, indeed, there seemingly is little to reveal: the small-time gamblers (with often large-time losses) seem like the kind of boy-men who exist everywhere, particularly as they engage in silly maneuvers to get a view up the knickers of straddle-legged local woman, Marianne. The game, however, soon becomes a kind of outrageous challenge, as each of the men attempt to outdo one other, and we quickly recognize that behind the standard tools of their trade—cards, booze, women, and school-boy behavior—something more frightening lurks. When one of their group speaks somewhat deprecatingly of their hero Rickabone, there is a kind of verbal ruckus which ends in the sudden invitation by the “hyper-super-sensitive” Michel for Jake to join him on a trip to Las Vegas. The pairing of these two is an extremely unlikely one, as strange as the friendships between Laurel and Hardy, Flaubert’s Bouvard and Pècuchet, or Beckett’s Mercier and Camier. For like all these famous duos, the one, Michel, is lean and, in this case, darkly handsome, and the other, Jake, a fat, jovial and placid man, the peace-maker of the group.

Soon we visit each of these figures at home, intuiting that something more is happening there than what appears. Michel is living with his mother, his only true possessions hidden under his bed: “the Hitlerjugend knife and the airgun and the weepy love letters from Markie”—one of only two times in this fiction that Claus hints that the beautiful Michel might possibly be homosexual. The author is even more subtle about the home-life of Jake, surrounded by his loving and beloved daughter, Didi, and his critical and argumentative wife, Dina. By the end of the book, however, we perceive this same scene in a completely different manner, as we discover that Didi is not at all a child, but a mentally-disturbed adult woman who behaves, after her breakdown, in a child-like manner.

In Las Vegas things are not much better, as Michel alternates between gambling tables and porno theaters and Jake attempts to take in the hotel pleasures, such as watching the performers at Circus Circus. Jake soon falls under the influence of a sham preacher, who alternates between preaching hell and damnation against the evil city and working as a gambling croupier. Although Claus takes a few potshots at American culture, his focus is not upon the American scene but upon the Belgian scene these two men carry within. Under the influences of his new experiences and his sense of distress, Jake writes strange letters home to his wife, letters which betray a new sense of reality—issues which she quickly discerns and confronts back in their home town.

Didi, it appears, was in love with Markie, even preparing to marry him until he was forced by Rickabone to break off the affair and take up a homosexual relationship with the wealthy Salome—an act which led to Didi’s breakdown.

Suddenly we begin to understand the complex relationship between the two men, the man who has had an affair with Markie and the man who has lost his daughter to insanity because of Markie. We now comprehend the love-hate bond between them, and sense the controlled violence that exists not only in these men’s psyches but in all the hearts of all the Unicorn denizens. And we also now perceive that the desire of the title is not just a search for pleasure in a world that, metaphorically speaking, is “Rickabone’s fault” (a desire holding out against by the gaping chasm of death into which one’s rickety bones inevitably will fall) but a search for redemption—that Michel’s invitation to Jake was more than a whim, was an attempt rather for the two of them reach out together for the truth.

Arriving at the truth, however, is openly dangerous. At a late night Vegas haunt, Jake recognizes some of the Circus Circus performers, one of them who stares intently at him in a clearly sexual gaze. The gentle giant snaps, violently attacking and killing the youth. Readers will recognize that Jake’s violence was directed not at the stranger but at the man who has brought him to this place.

As the two men escape back to Los Angeles and, ultimately, to Belgium, they have both undergone enormous changes. Jake moves away, never returning to the Unicorn. Michel occasionally visits, but he is no longer welcome, the denizens recognizing that something terrible has happened between the two of them—and fearing perhaps that that terrible thing is something in which they have all played a part.


Eleven years after writing Desire, Claus took on similar issues in his novel The Swordfish, but this time through the lens of a wealthy family, living in a country manor house in a provincial village. Businessman Gerard Ghyselen has married the beautiful Sibylle almost as he might acquire another piece of property to go along with “my soap works, my firm Olympia, my fertilizers, my lethal pesticides.” Sibyelle, however, has a difficult time playing the passive and respectable wife, and he is soon involved in an affair. By the time Claus’s fiction has opened, Gerard has left his wife and son Martin and returned the city and his mistress.

Highly influenced by but resentful of her opinionated mother, who drops by for regular visits and advice, Sibyelle is also an ineffectual mother, unable to properly nurture her beautiful and intellectually inquisitive son, who unlike either mother or father, has become accustomed to the country life, and spends more time, perhaps, with the drunken workman, Richard, than he does with his mother and grandmother.

Richard, who spends most the brief time in which the novel occurs repairing the roof of the house, has been hired by Sibyelle despite his time in prison—arrested, we later discover, for giving illegal abortions to the women of a small town. Similarly, his attentions to the young Martin are misunderstood by Sibyelle’s mother as attempts to abuse the young boy. Richard, as it turns out, is perhaps the most misunderstood character in a cast of figures who feel isolated from one another and unable to communicate their strengths and love. Certainly, one can presume that Richard’s and, in turn, his wife Julia’s alcoholism has a great deal to do with society’s misperceptions and intrusions upon his life.

Martin, an intense young man, living a meaningless life without proper supervision, has been taken under the wing by a religiously conservative teacher, Miss Dora, who has secretly encouraged the young boy to read a book on the life of Christ while she daily reads aloud to him from the New Testament. The result is that Martin, like many young religiously-schooled men (Toby Olson’s novel The Life of Jesus immediately springs to mind), from his own sense of confused separation from his family, plays out the scenes of the last day of Jesus’s life, struggling across his father’s estate with a cross that Richard has created for him, while imagining taunts and whippings from his fellow classmates. The absurdity of Martin’s secret exaltations is revealed when he reviles the matzo his grandmother has brought as a gift to her daughter and grandson, as being “the Jews’ bread,” exploding into an anti-Semitic rage. When questioned by his free-thinking family about the source of his feelings, Martin blames his headmaster Goossens to protect his beloved Miss Dora.

Goossens, meanwhile, is busy writing an academic drama titled Cybele—a work which he knows will be dismissed by the local officials and his fellow faculty members. In fact, the untalented author has written the work as a secret paen to his student’s mother, Sibyelle, a woman who represents beauty and grace combined, and for whom he sexually desires as against his servile wife, Liliane.

All of these characters and their bizarre actions would be only somewhat surreal and humorous if it were not for the fact that, in intermittent chapters, we observe the head of police and his violent sergeant Lippens interrogating Richard for some new, unnamed crime. What has happened, we ask throughout this work, to make them suspect him—and of what is he suspected of doing, abusing Martin as the grandmother claims? Attacking his employer Sibyelle? Although we have no evidence for any crime other than his belligerent drunkenness, we know that something as occurred offstage that will transform these pathetic longings and desires into a tragedy of sorts.

In a sense, the men around her, Richard and Goossens have both become initiates into the cult of Cybele, castrated men who have lost their sexual prowess. Trapped in a home where he is treated nearly as an infant, Goossens is nearly speechless when he encounters his Sibylle, hardly able to defend himself against having indoctrinated Martin in anti-Semiticism. Richard reports throughout the work that he has given up women—the cause of his imprisonment. The event that finally ends Sibylle’s relationship with her husband is his drunken acceptance of her dressing him up like a woman. And while, like the mythical Cybelean cults, the men around her symbolically wave swords in air—Martin uses a potato peeler as a sword, as a kind of demeaned “swordfish,” the weapon of his imagination— they are powerless.

It is only when, by accident, Goossens discovers Sibylle’s empty car abandoned on a road (she has run of gas) and he visits her at the manor house, that he is accepted as a lover, a sexual enactment that the drunken and wandering Richard, again by chance, observes through the window. His renewed sexual excitement brings him momentarily to life once more, but he must face the fact that he has no choice but to return to his drunken Julia, just as Goossens must ultimately return to the empty meekness of his Liliane.

Richard’s admission that he beat his wife to death upon his return home is a passionless tale of the inevitable consequences for a man and woman who have no way out.

What Claus reveals, just as in his fiction Desire, is that all these characters are the cause of the death, that the culture itself is enmeshed in their treacheries. Unless one of them can break free of the chain of repressed hate, there is no hope for any woman or man entangled in net of societal relationships.

Posted by greenintegerblog at 10:52 AM