Douglas Messerli | Trying to Pass (on Saramago's The Elephant's Journey) 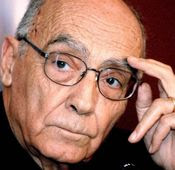 TRYING TO PASS
by Douglas Messerli

For English language readers it almost appears that Nobel-winning fiction writer José Saramago left his readers a celebratory novel for the year of his death. Saramago died this year on June 18th, and now, just three months later, Houghton Mifflin Harcourt has published this 2008 fiction.

Although it is clearly not his most important work, The Elephant’s Journey is a particularly engaging piece based on historical fact. In 1551, King João III of Portugal, decided to give as a wedding gift to his nephew, the Hapsburg Archduke Maximillian, his elephant Solomon, accompanied by his mahout Subhro. Upon Maximillian’s ready acceptance of this gift, the King sent members of his royal guard headed by their commanding officer, a group of oxen bearing a water barrel and porters in charge of both to travel from Lisbon to Vallodolid, where they would meet up with the Archduke before their voyage to Vienna.

The court had previously ignored the noble beast, who had come to them by a long sea voyage from Goa. But once Solomon was washed and set upon his journey he received the regrets of the Queen and others who suddenly missed their ungainly treasure.

Subhro, who has had little to do before embarking on this voyage, suddenly becomes a central figure in the story, despite his menial position, daring to advise the commanding officer on all aspects of the trip, including the positioning of his soldiers and the oxen tenders and the speed of their travels. The tension between the two arises as Subhro even dares to interrupt the officer’s sleep, and, as it becomes apparent that he is needed for the elephant’s care, gradually gains the confidence to speak out, often convincing the officer and his soldier’s with his logic and comprehension of the elephant’s moods.

Indeed, the wondrous elephant’s intelligence and seemingly human-like actions, coupled with the mahout’s growing awareness are at the center of this story. Like an awakening sleeper, Subhro comes alive as a figure with whom nearly everyone who encounters him and his charge must engage. And the story, which seems, at first, to be simply a picaresque tale of a long voyage, slowly is transformed into a tale of Subhro’s growing consciousness and, with it, his increasing effect.

Declaring that he is a Christian, “more or less,” he enlightens the accompanying soldiers on some of the finer points on Hinduism, including the tale of Shiva cutting his son Ganesh’s head and replacing it with the head of an elephant. With humorous and modest delight, Subhro is able even to transform the soldier’s dismissal of the story into a profound revelation at the basis of all religions. Subhro’s comment to the soldier’s disdainful remark, “Fairy tales”: “Like the one about the man who, having died, rose on the third day.” This, in turn, leads peasants of the village to begin to question their own religious tenants, waking the local priest to insist that “God is an elephant, father.” In desperation, the priest attempts a mock exorcism—employing regular water instead of holy water and speaking in a kind of pig-Latin—upon Solomon, who, in turn, gently kicks him. Later, however, the wise Subro, trains the behemoth to kneel before the basilica of St. Anthony in Padua, which is immediately declared as a religious miracle.

Before that, however, Subro and his charge must adjust to the changes that take place in Vallodolid, where they are given over to the Archduke, who is far less receptive to Subro’s subordinance than was the commanding officer. Indeed, Maximillian goes so far as to take away their identities, changing the Indian elephant’s name to Suleiman and Subro’s to the German-sounding Fritz. Their location in the entourage is altered since the royals cannot bear the smell of the Suleiman’s dejecta.

At one point, after the so-called miracle and the mahout’s attempt to gain financially from selling hairs from elephant’s head, it appears that Fritz has seriously fallen into to disfavor with the Archduke; yet he is unable to do without his services, and must endure the Indian. Ultimately, Subro-Fritz begins demonstrates his abilities as they make their way up Northern Italy, across the sea, and through the frozen winter passes of the alps, the royals coming to recognize his worth.

Indeed, it is in the coldest of the frozen wildernesses where the parade of men and beast can barely pass, where they are danger of losing their footing and falling into the chasms below or triggering landslides, that Fritz and Suleiman demonstrate their courage, surviving the unforgiving winter landscape. The voyage is, obviously, a metaphor for Fritz’s own attempt to pass, to become one with the society of which he has unpredictably been forced to embrace.

Yet it is only upon their arrival in Vienna, whereupon a young five-year-old girl runs toward the elephant while her parents and the royals look on in fear of her being trampled, that Suleiman and his rider truly reveal themselves as the gentle beasts and wise beings they encompass:

They clearly did not know soloman. He coiled his truck around the girl’s
body as if in an embrace and lifted her into the air like a new flag, the flag
of a life saved at the very last moment, when it was about to be lost.

The Archduke has no choice but to thank the outsider in the act that reveals the mahout as the dignified figure as we have come to recognize him:

The archduke stopped and looked him straight in the eye. Fritz bowed his
head and saw before him the archduke’s right hand, open and expectant.
Sir, I do not dare, he said, and held out his own hands, dirty from continuous
contact with the elephant’s skin…. When the archduke still did not withdraw
his hand, fritz hand no alternative but to shake it, his cold, calloused
mahout’s skin touching the fine, delicate skin of a man who had never even
to dress himself. Then the archduke said, Thank you for avoiding a tragedy,
But I didn’t do anything, sir, sulieman deserves all the praise, That may be
so, but you, I imagine, must have contributed in some way, Well, I did
what I could sir, I wouldn’t be a mahout otherwise, If everyone
did what they could, the world would doubtless to a better place….

And so is Fritz and Sulieman the elephant restored to their rightful place in an hierarchy where no other Indian might have ever been placed. Saramago’s gentle righteousness, however, is, as always, not without a more cynical recognition of reality. Soon after their arrival in Vienna, Sulieman dies, and with his death—despite his rightful payment and a tip—Subro-Fritz disappears from the pages of history.

Upon hearing of the elephant’s death, only the queen of Portugal mourns, weeping, as Saramago notes, “for the rest of the day.” After which, one imagines, he too might have been totally forgotten had not Saramago written this lovely fable.

Posted by Douglas Messerli at 8:28 AM