Douglas Messerli | A Vision of Uncertainty (on José Saramago's The Cave) 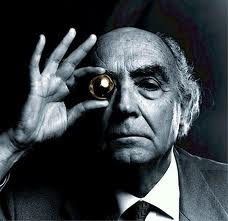 A VISION OF UNCERTAINTY
by Douglas Messerli

José Saramago A Caverna (Lisbon: Camino, 2000). Translated from the Portuguese by Margaret Jull Costa as The Cave (New York: Harcourt, 2002).

Saramago’s fiction of 2000 begins with a journey in which a potter, Cipriano Algor, is driving his son-in-law, Marçal Gacho, from their small village back into the city where Gacho works as a security guard. As they travel from the country through the so-called Green Belt (where vast quantities of agricultural products are produced in a scruffy landscape of gray and brown flat-roofed structures covered over with plastic) and the Rust Belt (an industrial region of “chaotic conglomerations of shacks”) to arrive at the Center, where Gacho works, the reader has experienced, without quite recognizing it, the entire structure of the novel. For this is a story, lovingly and languidly told, of a family’s gradual loss Eden, shifting them into an often horrifying urban landscape that might be compared with the futuristic visions of writers such as Huxley and Orwell.

Back in the small village where Cipriano Algor lives with his daughter, Marta, and—upon his regulated free weekends—his son-in-law, Algor reports that the Center—the gigantic shopping and apartment complex where Gacho works—has ordered no further shipments of the pottery he and his daughter create for their living, and that he must take away the remaining bowls, plates, jugs and other dishware. How will they survive? Gacho may soon be promoted, which means he can obtain an apartment in the Center, but neither father nor daughter are desirous of leaving their small community, their family-built kiln, and their beloved mulberry tree.

The sudden appearance of a stray dog who they name Found after he adopts them as owners, the discovery that Marta is pregnant, and a budding love-affair between Cipriano, himself a widower of several years, and the local widow Isaura Madruga further enrich their country lives, but these events also arouse further fears. What will happen to Found if they move to the city, and how will romance be possible if he is soon to leave with his daughter and Gacho. Will there be room for the child and Cipriano in the small apartments at the Center? Marta has the inspiration that they should turn their energies from pottery to figurines, and taking down an old set of encyclopedias, father and daughter set out to create a set of ceramic figures: a nurse, a bearded Assyrian, a jester, an Eskimo, etc. To their surprise the Center not only places an order for the dolls, but it is such a large order that they must overcome huge obstacles in order to create them.

Most of the novel consists of Saramago’s loving presentation of their relationships with each other, their work, and their landscape, as the reader gradually comes to know and to love these individuals through Saramago's Pastoral. Their lives, in all their simplicity and arising complexity, are presented in detail as they work at their new creations. The intermittent travels between village and city, however, gradually begin to reveal a future that is more than troubling. On one of the trips to the city to return his son-in-law to work, Cipriano observes a police crackdown in the Rust Belt that sets him to wondering if the police have not themselves created a perpetuated the violence behind it. Slogans of the Center suggest an Orwellian future.

Accepting the first batch of figurines, the Center reports that further orders will depend on a test sampling among their customers. Within the Center itself come deep rumblings as workers excavate deeper and deeper into the earth below the behemoth structure.

The long-expected news of Marçal’s promotion, accordingly, is met with dread by both daughter and father. The Center’s report that the test sample of the dolls has been negative and that it is canceling all further orders collapses the spiritual, creative, and productive world of the Algors, as they are forced to leave the dog Found with Isaura Madruga and enter a strange new world almost without natural sunlight.

The Center is wickedly presented by Saramago as offering nearly every diversion possible: “shops, escalators, meeting points, cafes, and restaurants. ...a carousel of horses, a carousel of space rockets, a center for toddlers, a center for the Third Age, a tunnel of love, a suspension bridge, a ghost train, an astrologer’s tent, a betting shop, a rifle range, a golf course, a luxury hospital, another slightly less luxurious hospital, a bowling alley, a billiard hall, a battery of table football games, a giant map, a secret door… a wall of china, a taj mahal, an Egyptian pyramid, a temple of karnak, a real aqueduct, a mafra monastery,” etc. etc. However, having witnessed the family’s previous lives, we quickly recognize that nearly everything of real importance has been wiped away. Without the natural beauty of their home, their work, and their involvement in the world around them, there is nothing at the heart of the thousands of activities offered by the Center. Family members grow secretive, suffering in silence.

A strange phenomenon has been found in the excavations below the building and the guards have been called to keep watch over the secret discovery and to listen in to the residents’ conversations. During Marçal’s shift, Cipriano determines to find his way to subterranean level where the guards are posted. I will not reveal what he and his son-in-law discover—indeed I am not truly sure myself what it actually is that they witness there. Whatever these "bodies" reveal they connect to the family itself and portend for the future of these artisans in Plato's Cave. Indeed, the future for anyone at the Center is, at very least, a virtual imprisonment, with torture and a symbolic death, if not a real one. Cipriano decides to return to the country, to Found and Isaura Madruga—even if he has no money nor future there. Marta and Marçal follow. The book ends with the family driving off together into a future that, even in its uncertainty, at least offers new possibilities and hope.

Posted by Douglas Messerli at 9:03 AM