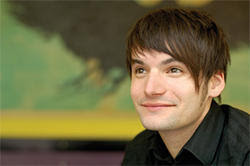 WHEN YOU CAN’T CUT FOG
by Douglas Messerli

Saša Stanišić’s remarkable premier novel, How the Soldier Repairs the Gramaphone, begins in a kind of mythologized Bosian world, a place of magical-like tales—many of them emanating from the young hero’s recently dead grandfather Slavko—mixed with a humorous presentation of the collapse of Tito’s Communist rule of Yugoslavia. Indeed a good part of this fiction enchants the reader through the young boy Aleksandr’s imaginative retelling of various stories from the small village of Višegrad on the river Drina (made famous by Ivo Andrić’s novel Bridge on the Drina), including those of his family members—Uncle Bora, Uncle Miki, Auntie Typhoon, the deaf Nena Fatima, his grandparents, great grandparents, and his own Muslim-born mother and Serbian father—and their colorful neighbors, the referee of the Yugoslavian league, Milenko Pavlovic (better known as Walrus), his son Zoran, the arguing friends Čika Sead and Čika Hasan, and Alexsandr’s school friend Edin.

Throughout this first section, as in many such childhood accounts, the mix of what remains of peasant culture with the popular culture of Western Europe and the United States (Carl Lewis, Ernest Hemingway, and Madonna are invoked as commonly as Lenin, Das Kapital and Marx), creates a humorous and often disquieting satire that cannot help but enchant.

At the time of these early events, the years from 1990-1992, Višegrad was nearly 64% Muslim and 32% Serb; today the town is almost entirely Serbian. Anyone picking up Stanišić’s book, accordingly, should have been prepared for the inevitable shift from comedy to something darkly tragic. Yet, in part because of presenting this information through his young narrator’s point of view, we witness the arriving soldiers less as the deadly murderers of ethnic cleansing than as often ineffectual brutes of war. Aleksandr with his family, hiding in their midst a young Muslin girl, Asija, camp out with neighbors in their basement as soldiers of both sides come and go, tearing apart the magical world they had all once known.

Ultimately, Aleksandr, his parents and others of his family members escape to Germany, where they face new prejudices but, at least, potentially more stable lives.

Unfortunately, as Aleksandr thrives in his new home, growing outwardly into a young man speaking fluent German whose parents eventually emigrate to Florida, his internal behavior as a slightly coy, cocky maker of lists and Comrade in Chief of the unfinished only slightly shifts. What we found appealing at the beginning of the book, accordingly, seems slightly embarrassing and, at times, shockingly immature late in this novel, particularly when the young adult returns for a visit to his former hometown.

It is hard to know, particularly since the narrator is so obviously close to the author’s own persona, whether Stanišić is suggesting that such horrific war-time experiences have psychologically damaged Aleksandr, have turned him into a kind of soccer-loving boy-man, or whether he is oblivious to his character’s no-longer-charming immaturity. It may represent a kind of catharsis to call random telephone numbers in Sarjevo, leaving a series of cryptic queries and messages about the young girl he seeks, Asija, but it also suggests that the character—still a major list maker and self-enchanted wizard—may need some medical help.

In a sense, of course, there is no way that the author or his narrator can truly reflect the horrific events that Bosnia and Herzegovina have undergone. Aleksandar knows that the dead were so numerous that at times it blocked up the river Drina, but he has not experienced it himself, and the world to which he returns is both bleak and modestly spiffed-up. Although there is still strong evidence of the destruction of nearly every building of his town, the village has attempted to become part of Westernized Europe. Zoran, the son of the Walrus, for example, has taken over an entire floor of a building, decorating it with modern appliances. The older remaining population, like Alexsandr’s former teacher, suffer from Alzheimer’s disease or, as in the case of his own grandmother, the forgetfulness of old age. Indeed, through different methods, nearly all those who remain have had to forget. And, like the fog which so deeply settles upon the Bosnian countryside that all traffic is brought to a standstill, Alexsandr’s attempt to return to this world through his memories and imagination is doomed, ending in a confusing cul-de-sac. For all his lists, all of his childlike memories, he is no longer part of that world. As Zoran moodily describes the situation:

Aleks! Just look around you! Do you know anyone here? You don’t even
know me! You’re a stranger, Aleksandr! Zoran stares at me at close
quarters. You’d better be glad of it.

Reencountering his Uncle Miki, Aleksandr is confronted by a man, we suddenly recall, who has remained as a Serbian soldier—clearly one of that town’s ethnic cleansers. Even Aleksandr must finally admit that his lists are of no worth, that remembering cannot save anyone from the past.

Perhaps Aleksandr’s manically absurd humor is the only way to deal with that dreadful and repeating history. The long description of a soccer game played by opposing forces in the brief cease-fire is certainly one of the most rewarding stories of this book of stories-within-stories. Long time friends, now dreadful enemies, Kiko (for the Bosnians) and Milan Jevrić, better known as Mickey Mouse (for the Serbians) battle to win the game and, as the cease-fire comes to an end, fight for their very lives. While outwardly they seem only to be “playing” their favorite sport, the game itself becomes a mirror of their fears and hates. As the ball goes into the woods, strong soldiers such as Meho—forced to retrieve it among the hundreds of landmines buried about—shit their pants, break into tears, and ultimately go crazy before they are shot to death. It does not fit our easy notions of war—our feelings of absolute moral outrage—to speak of a battle between life and death in terms of a pitiful sporting event. Yet it is hard to doubt that such an event might have or even actually happened in a world so completely and absurdly split apart.

In the end, we must recognize that both the author-narrator—despite our justifiable discomfort with his often coy and too clever childlike actions—weighed down with the two million dying voices of his homeland also must break, must metaphorically come apart:

The echo comes back, I have to sit down, I’ve eaten and drunk in-
credible amounts, twice, I can’t take any more, I let myself drop, I
lie there among the sweet humming of a rain of voices. Where? Howl
two million voices at once. I feel sick. I can’t cope anymore, above me
the clouds, five or perhaps six feet above me. The rain fills my mouth,
voices like flies in my hear.
Yes, I say, I’m here now.

With the completion of this fiction it is clear Alexsandr and his creator have grown into men, the latter an individual so gifted that we can only look forward to his future creations.

Posted by Douglas Messerli at 11:01 AM