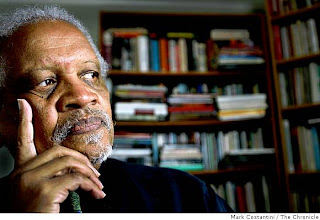 This wildly satirical novel brought Reed to national attention as an innovative voice in African-American fiction. In a grotesque kaleidoscope of a country called Harry Sam, the hero Bukka Doopeyduk, a twenty-three year old "apprentice Nazarene" struggles to come to terms with an insane world disturbingly like the America of the mid-sixties.

Reed exposes the contradictions, hypocrisy and sheer madness of just about every group or institution black or white that Bukka encounters. The reader sometimes puts down the book in disgust as if he had been wading through a field—not such of mud, as of excrement. There's a lot of shit hitting the fan in this book! But the exuberance of language, the rapid shifting of realities and the wonderful multiplicity of voices draw one back into the novel with fascination. Subsequent novels—Yellow Back Radio Broke-Down (1969); Mumbo Jumbo (1972); The Last Days of Louisiana Red (1974); Flight to Canada (1976); The Terrible Twos (1982); Reckless Eyeballing (1986); The Terrible Threes (1989); and Japanese by Spring (1993)—have established Reed as a strong and continuing voice of counter-cultural brilliance, comedy and rage. [Elizabeth MacKiernan]

Posted by Douglas Messerli at 10:46 AM