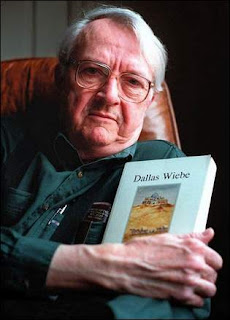 In this collection of wonderfully eccentric and inventive tales Wiebe covers a wide range of life experience from the adventures of a prodigious child who even in the womb is anxious to be born and "get started writing everything down" to the surrealistic nursing home life of the aged and blind William Weary. Wiebe's alter-ego, the mysterious Skyblue aka Badass aka Peter Seiltanzer, Ph.D., a Professor of English in Cincinnati, appears and reappears in the book—everyone seems to know him—until in the last story he has taken on the role of the Angel of Death. In "The Fairy Feller's Master Stroke" the narrator begins a discussion of a painting by the artist Richard Dadd, a genre painter of fairies who was confirmed to a hospital for the criminally insane after he had murdered his father. Suddenly the scholarly discussion turns uncanny as we realize that the narrator is an Oberon impersonator who for reasons unknown wears a golden crown and silver sandals and carries a spear. These are marvelous stories often disturbing, frequently hilarious and always surprising. The monstrously talented child in the title story reaches the age of five with total recall and a terror of kindergarten. "The dark night of my youth is over," he says. "I go to record the unrecorded babble of my race, shaking like the mountain on which I stand." Harry Matthews describes these stories as "touch, elegant and unsettlingly original." [Elizabeth MacKiernan]

Posted by Douglas Messerli at 8:59 AM