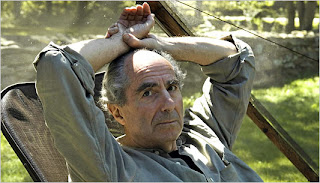 Review of Philip Roth's The Human Stain
by Igor Webb

Phillip Roth's latest novel, The Human Stain, forms the third, and perhaps concluding, volume of his recent "historical" novels or chronicles (American Pastoral [1997] and I Married a Communist [1998]), while at the same time harking back to his great novella The Ghost Writer, published twenty years ago. All of these books are narrated by Nathan Zuckerman. In The Ghost Writer Zuckerman is a wide-eyed twenty-three-year-old writer, flush with his first success, on something of a pilgrimage to the New England backwoods (actually, the Berkshires) where in ascetic isolation his aesthetic father E. I. Lonoff has settled.

Now, in The Human Stain, Zuckerman has out-Lonoffed Lonoff. He has learned altogether too much about the writer's life and is happily launched into self-imposed exile in, yes, the Berkshires; ageing, incontinent, impotent, living in a two-room cabin sans prostate, women, gerbils, dogs, or cats, having arrived at last at a spareness that Lonoff himself could have envied.

As a kind of monk, Zuckerman is hardly an actor at all in the drama of the novel but rather a rapt listener to the stories of others, in particular to the story of his neighbor Coleman Silk, the long-time reforming dean of nearby Athena College. Silk, someone with whom Zuckerman has previously had no more than a nodding acquaintance, one day shows up on Zuckerman's doorstep and insists that he write the story of his (Silk's) career, which the dead himself has been trying to write without success, under the title Spooks. It turns out that, besides Lonoff, Silk has been the only other Jew on the Athena faculty and the only Jewish dead of faculty in the college's history. His reforming days abruptly ended by the departure of the college's president for a bigger job at a more imposing school, Silk returns to the faculty after sixteen years out of the classroom as something of an anachronism (that is, as a humanist), and soon enough his return explodes into scandal when he asks out loud about two students who have never showed up for his classics class—"Do they exist or are they spooks?" The two absent students, it appears, are black; Silk is accused of racism; foe and friend on the faculty wash their hands of him; in the fierce craziness that ensues, Silk's wife dies—"They killed her!" Silk rages....You get the picture.

But in one of a number of wicked twists in the novel, Zuckerman discovers that Silk has a secret that puts everything in his story in an altogether different light, in fact that Silk has more than one secret. In fact, each of the novel's characters harbors a secret, some more or less banal, but some of the kind that go to the very heart of identity.

A digression: The jacket of my copy of Roth's second book, Letting Go, carries on the back a picture of him that, when I first saw it (in 1962!), produced in me a happy but also envious wave of emotion. A meticulously trim and neat—and ridiculously young—Roth is sitting in a rocker facing the camera. He has on a short-sleeve shirt open at the neck, chinos, and what used to be called, before the age of Nike, tennis shoes. On a low table beside him is what seems to be a board game, the name of which you can make out to be Gettysburg.

So what's to be so emotional about? That the guy—this Jewish boy from Jersey—could be so palpably, photogenically American, so at ease in that New Englandy rocker, so relaxed about claiming the culture (Gettysburg) for himself, so on top of goyishe informality, and yet—as the sneakers seemed to say in particular—so much, so simply, so autonomously, so already himself! That the guy seemed—to me, an immigrant survivor of the Holocaust with a new Americanized family name—to have beautifully, easefully overcome all the thorns and messes of having to pass. The autonomy was a heady thing to smile about; the sense of feeling at home a thing to envy.

Coleman Silk's big secret—kept from his wife of forty years, from his children, from everyone—is that he's black, that he's passed as a white man from the day he signed up for the Navy in the Second World War. He has another secret too—that, two years after the scandalous close of his career and two years after the death of his wife, he's having an affair with an illiterate thirty-four-year-old cleaning woman, called Faunia Farley, who works at the college. He has received an anonymous, moninous letter saying that "Everyone know" of his affair, a letter that, as we discover, has been sent in tortured secrecy by the young new chair of Silk's department, Delphine Roux, herself secretly....

And so it goes. Some of these secrets are of a wholly different order than others, but in all they bring to mind the importance of big secrets to the modern novel—Rochester's Bertha, Pip's Magwitch, Gatsby's money—there's a very long list, including of course a great many famous illicit affairs in addition of Madame Bovary's. These secrets seem inescapable parts of modern life, inescapable for all of "us" who for whatever reason have been cut loose from our origins and set out to wend our ways towards identity under circumstances of dizzying, bewildering, irresistibly tempting, and often damned scary possibility.

For a long time the American take on this trajectory between past and present, this modern pilgrim's progress, was captured in the hopeful (albeit slight uncomfortable) metaphor of "the melting pot." People from all over came to the United States and were dissolved and reconstituted into a new whole. Where once identity was almost altogether determined by place of birth, caste, class, religion, race—now it would be determined by the activity of the self (and if you were born in the States, a kind of analogous internal emigration and immigration was assumed). Although this was a supremely secular and thoroughly social matter, it was also, as emphatically, an existential one. Where once you were promised a soul's due in the afterlife while you were hobbled on earth with identities which seemed to embrace everything except yourself, now you could at last live a life that joined self and soul. This was the American adventure.

Milan Kundera as said about Roth that his "nostalgia" for his parents' world—the lost world of the upstanding America—has imparted to his work "not only an aura of tenderness but an entire novelistic background." In Roth's recent books this background has become foreground; maybe it always was the foreground, that is, the location for the main line of exploration in Roth's work, which is the exploration of the conditions of freedom (not liberation, but freedom) in the American melting pot.

In a book full of subtle and definitive reproach to the currently dominant view of Americas as a "multicultural" collection of unhappily continuous nationalisms, and in a book that also, incidentally, makes several bows to Faulkner, Roth invents for Silk a wonderfully diverse, mixed up, miscegenerated American lineage: Silk learns from his mother that his family (and his Jersey black community) are

Silk sees even this past as something to be honored, rather than worshipped—"To hell with that imprisonment!" he says. Instead, Silk opts "to pass," chooses in other words the path of radical autonomy that, Roth maintains, is the fabulous fate of the American, especially in the modern era. This is the hand we've been dealt, and anything else is an evasion and a lie—

As though the battle that is each person's singular battle could
somehow be abjured, as though voluntarily one could pick up and
leave off being one's self, the characteristic, immutable self in
whose behalf the battle is undertaken in the first place.

This "singular battle" is, as I read it, what Roth's fiction has been "about" from the beginning. Not that this singular battle isn't muddled and often made more dangerous by one's own hang-ups, which are fairly likely to include ethnicity, family, the works, and about which Roth has written with humor and fire and really like no one else. And not that this singular battle can be waged in exile from the hangups of the people around you, to which Roth has also paid a lot of attention. But the essential step to maturity, Roth seems to say right from the start, lies in accepting the radical autonomy that, in modern America, is the way we live, and that anyway is ultimately and inescapably the ground on which we stand in the existential "battle" of being. In The Human Stain, through Coleman and Faunia's relationship, Roth delicately, I am tempted to say sweetly shows the purpose of the battle, if I can put it this way, to be the affirmation or better the realization of being, of being pure and simple, the humanist's "goal" for the examined life. And if that seems paradoxically unintellectual, it's not more paradoxical than, as Montaigne says, that you need a good deal of knowledge and in particular self-knowledge to understand that you don't know anything.

The last third of the novel occupies itself less with Coleman and Faunia than with the imagination—this is, after all, a Zuckerman novel. I want, in closing, to say two things about Zuckerman's imagining. First, that it is rendered, sentence by sentence, in an absolutely beautiful American prose—vulgar and sacred, utterly colloquial (no one has a better ear for talk than Roth) and gracefully intellectual, mundane and eloquent, slapstick and high-toned, ethnic and "standard," street-smart and book-wise. A prose of great verve, intelligence, and suppleness, it's precisely the melting pot become writing—which, in Roth's hands anyway, is just a great pleasure to read. The second point I want to make has to do with "what happens," in Zuckerman's words, "when you write books," with Zuckerman as author. "There's not just something that drives you to find out everything," Zuckerman says, but "something begins putting everything in your path. There is suddenly no such thing as a back road that doesn't lead headlong into your obsession."

In The Human Stain Zuckerman doesn't rant, rave, and rage, and he doesn't stumble into too many wacky situations. But he's still driven by his writerly obsession, he still can't let things go when he thinks, as he does when everyone else is comfortable to close the book on Coleman and Faunia's story, that that just "would not suffice. Too much truth was still concealed." Zuckerman goes on to say "there really is no bottom to what is not known. The truth about us is endless. As are the lies." But, even believing that what there is to say about us is endless, Zuckerman nonetheless—in search for this slippery, human truth—continues to violate decorum, to drive down the dangerous back roads, to do things no sane person would dream of doing in real life. So it is through imagination that, in a world of radical autonomy, we seek truth: this is the thing, this obsessiveness, that Zuckerman holds in reverence. The Human Stain suggests that this might be the last of Zuckerman, which maybe sharpens one's appreciation of Zuckerman's obsessiveness as an especially apt and daring form of sustained moral meditation. From that point of view alone, we are going to be a low poorer if, in fact, Zuckerman is about to be retired. [Igor Webb, Partisan Review]

Posted by Douglas Messerli at 8:38 AM