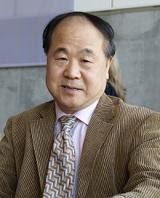 Review of Mo Yan's The Republic of Wine
by Jeffrey C. Kinkley

Many critics think Mo Yan (b. 1955; real name, Guan Moye) the finest Chinese novelist of his generation, and I agree. Each of his three novels available in English retains its own distinctiveness, thanks to the inspired hand of his translator, Howard Goldblatt. Red Sorghum (1993), a gorgeously cinematic epic novel that replaces the lying myths and pieties of official Chinese history with even taller counter-myths, led to Zhang Yimou's film by that name, which launched actress Gong Li's career. The Garlic Ballads (1995) is a more realistic relation, about communist corruption and folk resistance.

The Republic of Wine weaves an even taller tale of corruption, but this time the folk do not resist the decadent and commercialized urban China of the 1990s. This novel is relatively "extreme," not only in its magic-realist exaggeration (the main plot is about a detective come to investigate rumors of baby-eating by officials), but also in its modernist splintering of the narrative and its postmodern eclecticism. The five-page run-on sentence ending the novel (a key to its interpretation, Mo Yan agrees) was cut from mainland editions (the novel was initially published in Taiwan in 1992), but it is restored here. Fortunately, Goldblatt persuaded the author that the passages' similarity to Molly Bloom's soliloquy in Ulysses no more compromises Mo Yan's originality than do his other debts to Faulkner and García Márquez.

This is a work of high metanarrative. Each of the nine main chapters (the tenth is an epilogue) is divided into four parts, or narrative threads. The first thread is the detective story, or, really, Borgesian anti-detective story, since the investigator in his drunkenness not only cannot distinguish between fact and faction, but winds up being the only truly confirmed criminal (a murderer) in the book. He ends his life by drowning in a public toilet. The fictitiousness of it all is dramatized not only by these existential absurdities, but by second and third threads of narrative, also delivered by installment in each chapter: letters from a "One-Pint Li," a doctoral candidate in alcoholic studies, and a self-dramatized "Mo Yan," whom Li writes in hopes of changing his line from brewery to creative writing. He finally persuades "Mo Yan" to come to the Republic of Wine to write promotional copy for it, dressed up as literature.

The first thread, the serialized detective story, is thus "the novel" proper, a work in progress by the self-dramatized Mo Yan. But there is also a fourth thread: nine consecutive stories by One-Pint Li mailed to "Mo Yan." By interpretation (which Mo Yan does not entirely admit to), these stories are variously a pastiche of Lu Xun, a send-up of Wang Shuo, spoofs of the neorealists, Jia Ping'ao's Abandoned City, and heaven knows what else. Each of the four interspersed serial threads can stand alone, but the correspondents of course answer each other, and so do Li's stories and certain chapters of "Mo Yan's" novel proper. Its detective plot appropriates "Li's" characters—sometimes before Li mentions them.

The plot of the first thread and the metaplot of the whole work are at every point unpredictable. The letters and Li's stories are risible. And Mo Yan (the real, meta-author) in the end gives us much to think about regarding high philosophy, writer-reader relations, and the future of literature, which may well be tending toward advertising copy, via nine or more routes. Drunkennes, which in Chinese tradition facilitates truth and forgetfulness, becomes a metaphor for the slurred realities of official life, the reform economy, and Chinese existence.

This novel is so "over-the-top" that Chinese critics praise the authors' next one more highly, the banned historical mega-epic Big Breasts and Full Hips. Mo Yan's international readers must hope that Goldblatt's ingenuity and stamina will not flag. [Jeffrey C. Kinkley, World Literature Today]

Posted by Douglas Messerli at 7:14 AM