Joseph Clark | Review of Charles Baxter's The Feast of Love 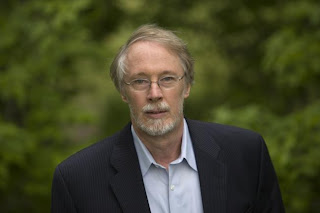 Review of Charles Baxter's The Feast of Love
by Joseph Clark

I am certain I've just finished one of those rare novels that comes along only once or twice a year for readers—and may happen only that often in a writer's entire career. With the publication of The Feast of Love, Charles Baxter has written a memorable, hilarious, and wondrous book. Known more for his short story collections (and regarded by other writers as an absolute master of that form), Baxter shows in this, his third novel, that he can dazzle in longer prose as well.

Told in a series of unfolding monologues, The Feast of Love begins with "Charlie Baxter" waking up from a troubled writer's sleep in which he has imagined a codex of interlocking gears spinning in the sky. He takes a moonlit walk to calm down and witnesses a young couple making love on the fifty yard line in the great space of the U. of Michigan football stadium. His neighbor Bradley and his dog of the same name sit on a park bench in a empty park. "We're two members of the insomnia army," Bradley says, and their dialogue progresses until he has suggested to Baxter that if he only listened to his neighbors tell their own stories he would be able to sleep better at night. "Why don't you let me talk? Let everyone talk. I'll send you people, actual people...human beings who genuinely exist and you will listen to them tell you stories."

In lesser hands, this preamble might signal an overly self-conscious "experiment" about to befall the reader, but Baxter quickly exits and makes his return to 19th-century structure seem both invigorating and new. He does not lapse into drawing smoke and mirrors, but his characters—especially the poignant voice of the twenty-year-old Chloe, a many times pierced and tattooed girl who works in a coffee shop—take the sort of linguistic risks that Baxter has rarely attempted in the past. Sometimes a person telling you a story goes too far, tells too much, or rambles and strays from time to time. But if you've come to love that voice then it is easy to accept the flaws in technique—to understand that eccentricity is organic and seamless.

Baxter's two first novels, First Light and Shadow Play, worked this familiar territory of a contained Midwestern setting, but the characters in those earlier works were held in place, muzzled by a tone of dour inevitability and somewhat overbearing plots. You can tell when a writer has left his outline behind and begins to follow his characters into places where the sheer exuberance of a spoken story spins and meshes like the gears in the sky the author woke to in the first place.

This is a novel of voices so insistent and seductive that you find yourself wanting to tap out the rhythms with your feet. Say what you will about plot, characterization, and structure, the tone of a novel is what ultimately seduces a reader into going along with the artifice of fictional worlds. Baxter's tone is mythical without being ponderous. He takes the reader right up to the edge of where "magical realism" begins, and it is in this tremulous nether world where his maturity as a writer really shines. Begun after midnight on a summer night, The Feast of Love remains there tonally, maintaining a hushed intensity right up to the last page. It is the sort of night you stay up late talking with your best friend, telling intimate stories, finding clarity and sharing—and who knows, maybe conjuring up revelation. This complete world in The Feast of Love contains marvelous humor and redemptive acts that are always bathed in the muted luminosity of a summer moon. [Joseph Clark, Rain Taxi]

Posted by Douglas Messerli at 10:34 AM